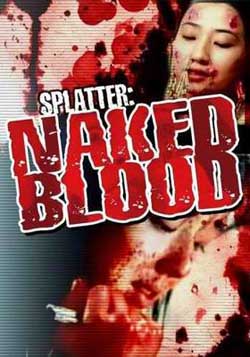 A scientist named Eiji has developed a new chemical called ‘MySon’ that can turn pain into pleasure. He decides to put three girls who attend the experiment held by Eiji’s mother in the test. Meanwhile, Eiji has a crush on one of the girls, Rika. ‘MySon’ influences the girls gradually. The gluttonous woman wishes to have the best food in the world, but she ends up eating herself. The vain woman wishes to have the thinnest and most beautiful body in the world. However, noticing body hairs and pores, she also tries to mutilate herself. Rika does not seem to be influenced by ‘MySon’, but Eiji finds out her secret and everything goes wrong…

Hell-o, bloodthirsty ghouls of the extreme. This review is for a film that I found quite amusing, but not so much entertaining. It seems to me as if the writer wanted to purely shock the viewer (nothing wrong with that), but without a solid story line involved. There were loads of CGI blood, which I’ll get into in a moment.

Naked Blood is pretty slow moving at first. We are introduced to a group of test subjects in a clinic. Shortly afterwards, we are subjected to a woman… and her cactus. She has a virtual reality like machine sitting in front of the it in which she “becomes one with the cactus.” Odd, but true nonetheless.

She realizes she is being followed by a dude with a video camera, so she catches him in the act and confronts him. At first, he denies the allegation, and then proceeds to use reverse psychology on her by telling her that he hates her. A lot of hate follows as she takes him to the places she “hates.” She hates everything around her, so decides to go to a place that she loves… Her home, to introduce him to her pet cactus. He soon tells her about the medicine he has created called “My Son” which is supposed to turn pain into pleasure and sadness into happiness. She lets him join her in the virtual reality machine, which goes a bit crazy from there.

There were many voyeuristic shots, which I enjoyed. Some were through his video camera and some were through the camera and a window, which were even more appealing. Almost in a Friday the 13th sort of vein, but adding the window/ video camera effect to go along as well. It looked as if in some parts or locations, they did not have permits to film there. I could be wrong, but many by-passers were looking directly into the camera with a look like what are you people doing with those cameras? Besides this one flaw, there was also one type-o that I noticed within the subtitles. The word “yet” was “vet.”

Now, onto the Gore Score. I will also mention each of the overbearing sound effects used with each slice of flesh. One woman cut her finger as she was cutting sushi or something (I’m not really too big on foreign foods). She started to suck the blood from her finger and it sounded as if she were slurping soda through a straw. This was quite random, but another woman had a taste for… herself. She dips her hand in batter and begins to feast upon her deep fried hand. The crunching with each bite sounded like a huge piece of fried chicken. There was not much emotion when sticking her hand into the boiling water. Then it took a gruesome turn. Later, she begins to eat herself in other places, such as her vagina and breasts.

The nipple was very small at the end of a fork, but again sounded like a huge piece of fried chicken. She then used a butter knife to dig her eye out of the socket. As a Special Effects Artist, this was probably my favorite part of the film. The eye looked believable and the empty socket looked awesome. Her nerve endings were rather stiff and hung off of the back of the eyeball as she munched away. Later, there was a brutal stabbing that looked like a mixture of CGI and practical effects. The splashing and gushing blood was clearly CGI (but well done) and the blood on her face looked practical. As she stabbed away, a green screen was used for the background as the immediate view went into an acid trip blur sort of effect.

This was quite amusing to a point. She then opened a box cutter (again, with over done sound effects) and slashed the throat of her victim, before going at him relentlessly with the blade. The flesh sounded like she was cutting paper. Later, we see a woman with a huge, gaping pit in her stomach in which a man climbs inside and closes the wound. After he is inside of her, not a drop of blood remains. That kind of threw me off. I believe it was supposed to be some sort of dream. I don’t know, people. It was brutal at some points, but seemed as if it were over brutal, which took the realism away. I’m a stickler for realism.

Overall, this film is worth a watch if you want to see something different. It indeed stands on its own in that category. Other than that, it’s pure shock value, with very little story. The end(don’t worry, I’m not giving anything away) is almost as if it went in reverse, but doesn’t really show how it got back to the man at the beginning of the film’s childhood. I think some holes could have been filled in. All in all, I give this film, Naked Blood (didn’t like it, but didn’t hate it as well), NO HORNS.