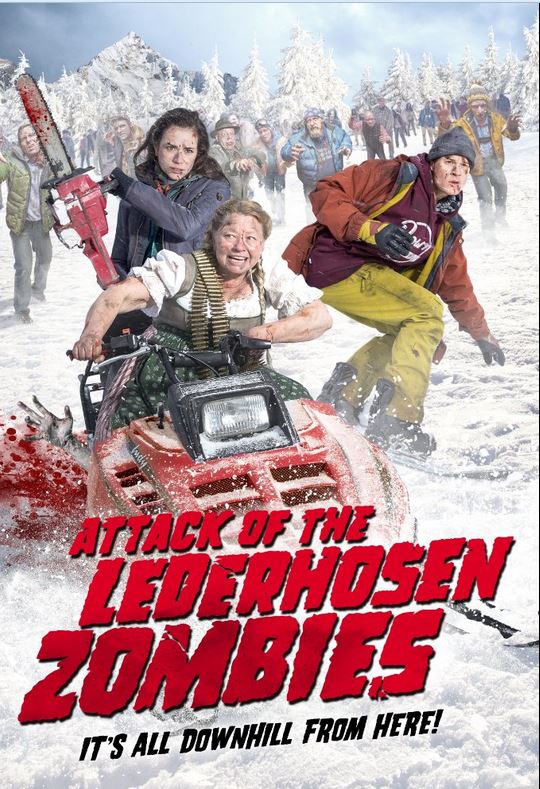 Zombie action in the Alps: a group of young snowboarder is stuck in a remote mountain ski resort, where an all-night aprés-ski party soon turns into a hellish nightmare of zombie mayhem.

‘An Austrian horror’ is a phrase that has a prominent place in the annals of history. An Austrian horror-comedy has been used sparingly throughout the ages. While Attack of the Lederhosen Zombies shows all the trademark efficiency of the Austrian people, clocking in at a brief hour and seventeen minutes, it adds nothing to the already overstuffed zombie genre.

There’s a clear hope that this film would find the same cult audience that the superior Dead Snow duology found. Those two films effectively combined the horror and comedy with strong character development. Lederhosen is off the mark completely, replacing any character moments with its utter lack of charm and tedious one-off jokes. This film is in English with primarily foreign actors so perhaps the jokes were lost in translation, but man can only endure so many zombies being cut in half by snowboards.

Ignoring any semblance of reality the plot of the film begins with two men attempting to find an investor for their machine which they claim will help keep snow on the mountain. As much as climate change will reshape the typography of earth in the next few hundred years, snow will still be created by freezing water. However this machine spews out glowing green mist, it’s not explained why. I guess this is one of the jokes, maybe? Nothing is ever dwelled on long enough for it to be a blaring misstep which helps in this case.

Above this hopeful sale of mountain misting machinery is a helicopter with the snowboarders which will roughly fit the shoes of main characters. The viewer is informed these men are very good at allowing gravity to push them down hills while attached to boards. They’re here in the Alps to, unsurprisingly, snowboard. In the fast paced world of extreme sports it’s not entirely clear what sort of publicity they hope to garner for this, but it’s just another log on the fire that is the films plot.

Wanting to be impressive, Steve our hero decides to make the trip naked. He arrives at the bottom of the slope to meet a child fan now scarred by the sight of a raw Vienna sausage. I think this was another joke I didn’t understand. This is the sort of joke that’s been done a million times. The child actor plays the scene with a maudlin dread, as if she saw not only a man’s penis but her dead-end future as well. These shenanigans get the snowboarders fired and stranded at a nearby ski resort.

Much like every other zombie movie, the man who was accidently sprayed by the green stuff turns everyone else around him into zombies. It can’t be overstated how uninteresting all of these events are. The rest of the movie plays out like a thousand movies before it. Even the zombie deer puppets while looking quite like the deer head from Evil Dead, 2 have been done better. Movies like Zombeavers, proved that you can be an original film by rearranging an existing formula.

The last twenty minutes are the standard zombie trope of breaking of the gates. By some means however vague the zombie horde is upon our intrepid heroes. This particular onslaught includes numerous members of the undead being mutilated by snowboards, machine guns, and giant fan blades. It’s all well shot, and the effects are above standard, but that’s simply not enough. America has the reputation for being a culture of recycled ideas and remakes; here is one example that we are not alone. The entire world gets to make boring garbage in this century of globalization. 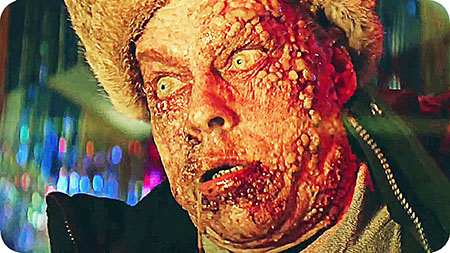 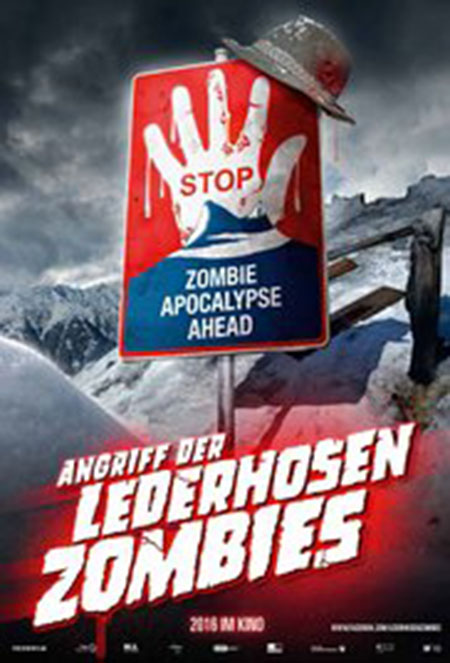 There’s nothing in Attack of the Lederhosen Zombies to physically repel you into turning it off. It’s so short on substance and brief you’ll barely be able to retain the memory of watching it. At least that’s what I’m hoping; I’d hate to resort to bludgeoning it out of my brain with a rock.