“In Paris, the shy bureaucrat Trelkovsky rents an old apartment without bathroom where the previous tenant, the Egyptologist Simone Choule, committed suicide. The unfriendly concierge (Shelley Winters) and the tough landlord Mister Zy establish stringent rules of behavior and Trekovsky feels ridden by his neighbors. Meanwhile he visits Simone in the hospital and befriends her girlfriend Stella. After the death of Simone, Trekovsky feels obsessed for her and believes his landlord and neighbors are plotting a scheme to force him to also commit suicide.” (courtesy IMDB)

My old friend Sigmund Freud once told me that all fantasy springs from the mind. There is an interesting cinematic sub-genre whose only fantastic element is that the audience is allowed to share in the hallucinations of a tormented mind, and each of us becomes a schizophrenic first-removed. It is interesting how readily we recognise these subjective nightmares of isolated people. Jung’s theory of archetypes is, for the moment, vindicated. One of the prototypes of this kind of film is Roman Polanski‘s Repulsion (1965), but the film we are now considering is Polanski’s 1976 effort The Tenant (1976), which tells a comparable story.

Roman Polanski himself plays the central figure, a withdrawn, likable, nervous young man who moves into an apartment (in a rather grim old building in Paris) which was previously occupied by a girl who tried to commit suicide. The longer he stays there, the more remote he becomes from everyday life, and after a time he is not even able to accept the sexual consolation offered to him by a generous, outgoing girl played by the attractive Isabelle Adjani in one of her earliest roles, just after The Story Of Adele H. (1975) and well before Nosferatu (1979), Possession (1981) and Subway (1985). 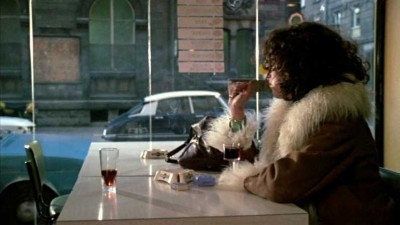 His paranoid hallucinations (which we share) begin to multiply. Through his window which overlooks a courtyard, we see a shadowy figure standing immobile in the communal lavatory for hours. He takes to dressing in the suicide-girl’s clothes and wearing her makeup. When he buys cigarettes, he is given her brand. The pressure towards his repetition of her suicide is remorseless (immediately preceded by a vision of his own head bouncing through the air like a ball). 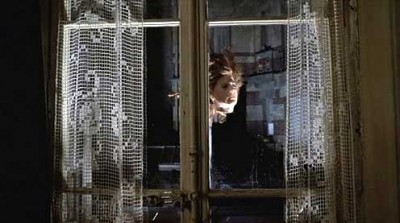 Appallingly, when he hurls himself from the window he is not killed, and painfully drags himself upstairs to do it again, surrounded by the other tenants – witches or ordinary people, we no longer know. At the end he is lying in hospital, screaming from within the bandages that totally enwrap him, a mirror-image of the opening shot of the suicide-girl, but this time the subjective camera angle suggest that he is us. Oddly, Polanski’s inquisitive, roaming camera and his interest in the small mannerisms of people give the film quite a lively feeling, mercifully at odds with its depressing content.

The first part of the film is quite fascinating as Polanski’s paranoia regarding his neighbours intensifies. When he starts to dress as the suicide-girl, it’s too unsettling and rather ridiculous, especially since his transition is a little too quick. Also, I’d much prefer to see what’s really going on with the neighbours than to suddenly see Polanski’s hallucinations, which look more like Hollywood cliches than European art-house. Call me old-fashioned, but I think it’s much scarier when the victim is sane and can comprehend the magnitude of what is terrorising him.

The most interesting facet of the film is the nature of Polanski’s paranoia. In fact, even before he moves in, he has a tremendous feeling of persecution: He’s a French citizen, but because he’s Polish he never fits in. Indeed, the police chief asks for his identification. Notice in the first scene how he repeatedly apologises to the gruff concierge (Shelley Winters) for disturbing her and entering her apartment (he offers to come back later). All through the film he keeps apologising for something, or reassuring people that he won’t be a nuisance, or defending why is just standing (or laying) where he is. Rather than just simple paranoia, it is the overwhelming sense of persecution because he doesn’t belong (in France, in the apartment, in the cafe) and because even his identity is suspect, which leads to his final, insane solution. And it’s with that thought in mind I graciously invite to please join me again next week when I have another opportunity to make your stomach turn and your flesh crawl with another lusting, slashing, ripping, flesh-hungry, blood-mad massacre from the back side of…Horror News! Toodles! 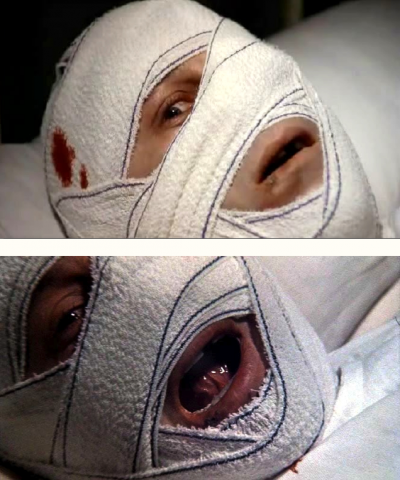