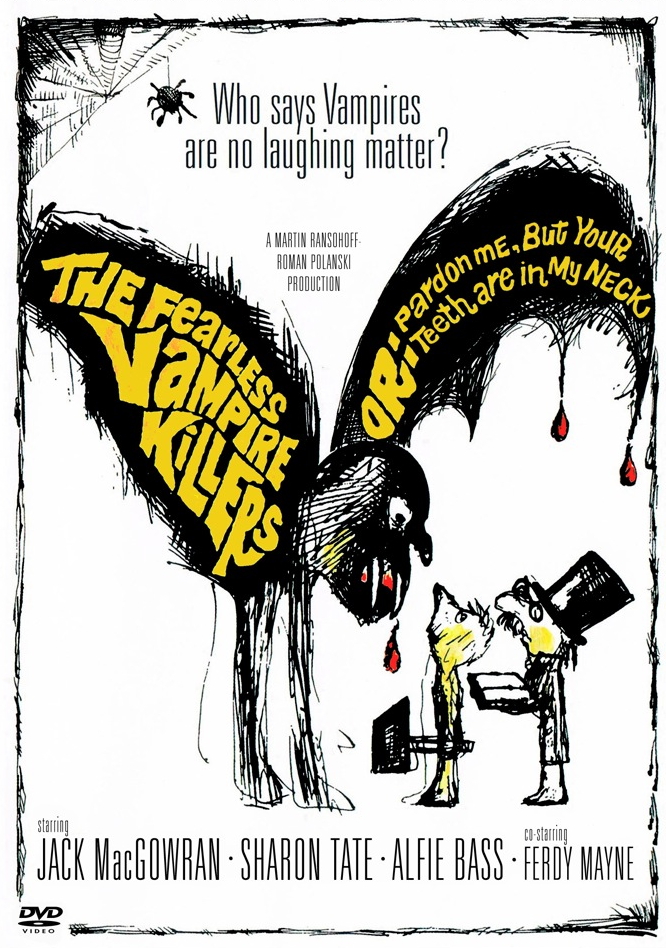 “The famous Professor Abronsius and his clumsy assistant Alfred travel to the remote Transylvania to research vampires. They are hosted in an inn by Shagal and sooner the shy Alfred falls in love for the inn-keeper’s red-haired daughter Sarah. When Sarah is abducted by the mysterious Count von Krolock, Professor Abronsius and Alfred head to his creepy castle. The duo of scientists are welcomed by the count and his gay son Herbert and invited to a vampire ball late night.” (courtesy IMDB)

Why horror cinema rose like a vampire in Britain during the sixties, and the form it took, is a curious study indeed. Even more in the late fifties than today, British films were tied to the great prestige of the theatre. Their stars were Alec Guinness, Laurence Olivier and Michael Redgrave. Their successes were the now-forgotten adaptations of Somerset Maugham, Terence Rattigan and William Shakespeare, which were promoted by critics with a fierce defensive chauvinism. American films were similarly represented as lacking in the civilised qualities which good British films possessed, particularly the westerns and thrillers of filmmakers like Anthony Mann and Don Seigel which are remembered from this era. For most English filmmakers, the making of such movies meant ‘selling out’ – to have abandoned the traditions of English literature and British theatre. The Hammer horror films were a significant break, not only from the English films which proceeded them, but also from the old Universal studios cycle. 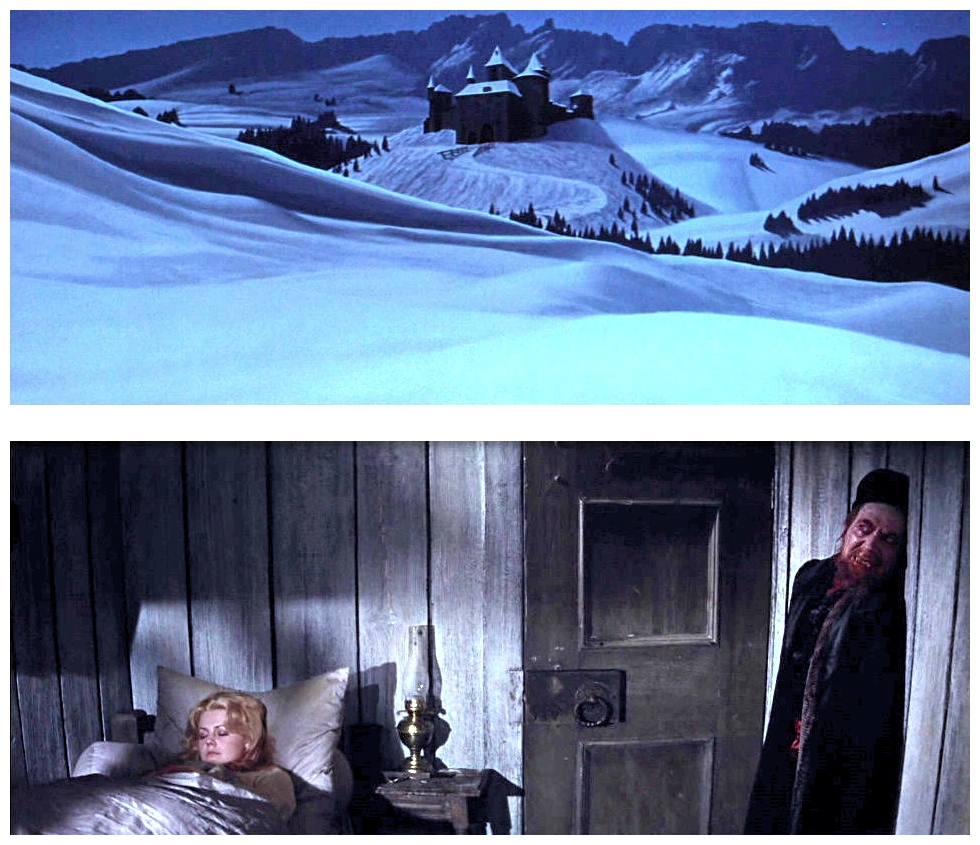 These monster movies were shot in colour, chiefly to show off the large quantities of Technicolor red which gushed so profusely from severed limbs and open wounds. Also, where the Universal films had used all their resources to minimise the fright, Hammer used music, lighting and sound to prop up the lamer moments in their movies. At the peak of this British vampire cycle is Roman Polanski‘s parody The Fearless Vampire Killers (1967) retitled in the USA as Dance Of The Vampires. Polanski steadfastly maintains that his childhood in the Cracow ghettos, the passing of his mother in Auschwitz, the murder of his pregnant wife by drug-crazed hippies, and his belated flight from America to avoid a further prison term for his alleged rape of a thirteen-year-old girl at Jack Nicholson‘s house, have nothing whatsoever to do with his underlying feelings of alienation and hostility that permeates most of his movies. And he may be right. 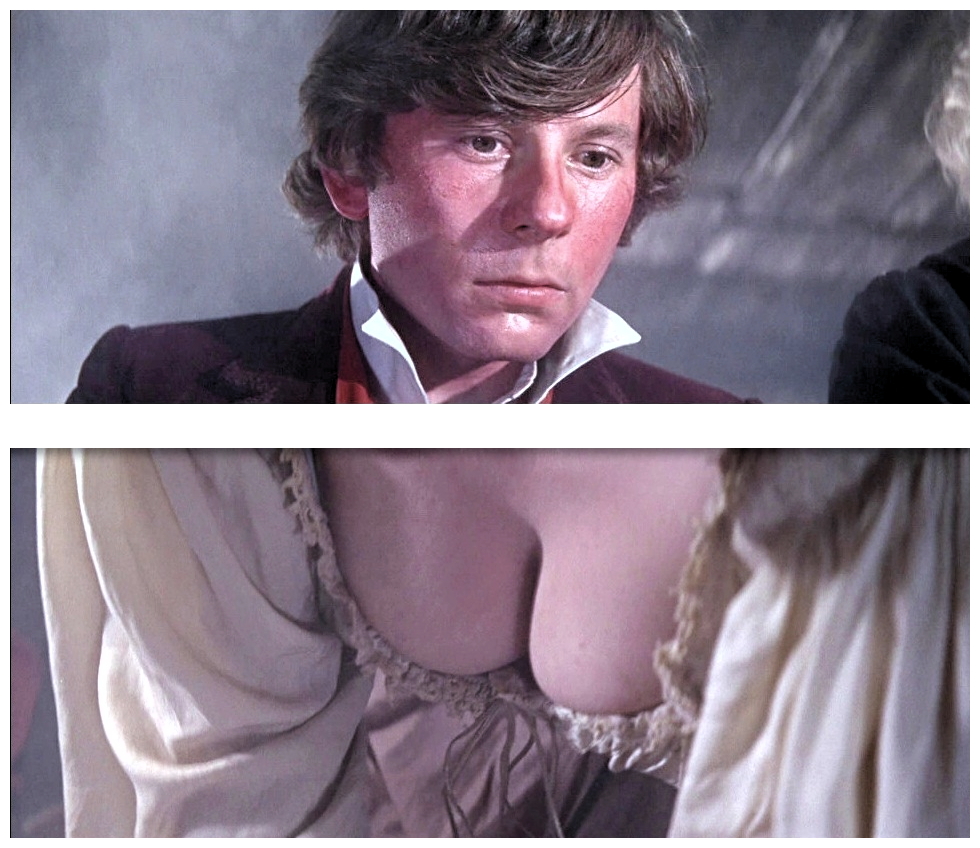 He’s an intelligent, self-possessed man who has survived, apparently intact, horrors that would have crippled lesser men, and it seems patronising in the extreme not to listen to him. A graduate of the Lodz Film School, Polanski has always been a master of many genres, and he proves this by following the cult success of the art-house film Repulsion (1965) with Rosemary’s Baby (1968), two of the most genuinely frightening horror films ever. Between these two terrifying classics, while working in Britain, Polanski noticed that audiences would laugh a lot during horror films, and decided there-and-then to make a vampire comedy modelled on Hammer horrors, particularly The Brides Of Dracula (1960). “I stylised a style,” he claimed, relishing in such traditions as bags full of vampire-killing devices, and rooftop sets standing firmly on the studio floor. The result, however, was totally different from its inspiration. This can be seen from the opening metamorphosis of the MGM lion turning into a cartoon vampire and the animated titles begin (including ‘Fangs by Doctor Ludwig Von Krankheit‘). 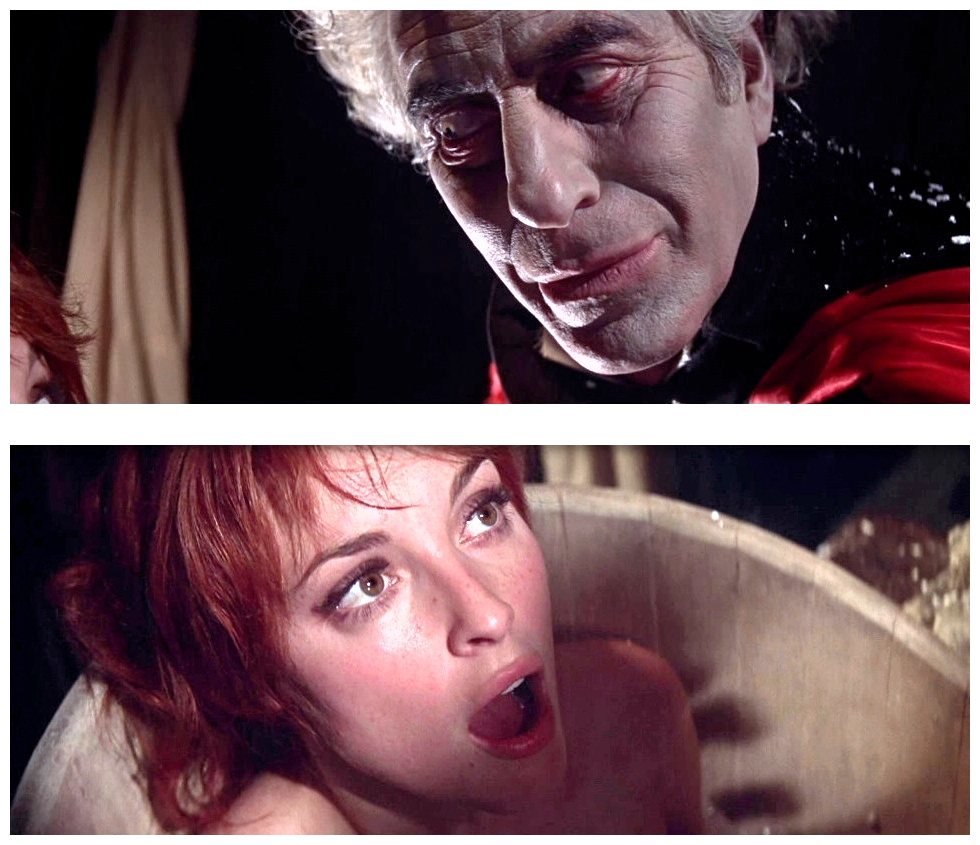 Down these credits, the animated blood drips over a grey mottled ground, revealed to be the surface of the moon shining on a Disney-like landscape into which the characters drive. This confusion with real and animated objects becomes a motif. Out of the Transylvanian snowscape comes Professor Abronsius (Jack McGowran) and his apprentice Alfred (Roman Polanski) who deduce there are vampires about, judging from the behaviour of the local villagers. Alfred meets the innkeeper’s beautiful daughter Sarah (Sharon Tate) when she creeps into their bathroom, and he witnesses her abduction by Count Krolock (Ferdy Mayne), leaving only a residue of bloodstained soap suds. The innkeeper’s attempt to rescue her only means that he is found the following morning, frozen stiff and covered with vampire bites. Abronsius and Alfred go to the castle where they are welcomed and then trapped, and their situation is further complicated when the count’s gay son Herbert (Iain Quarrier) takes a liking to Alfred, who manages to save himself by jamming a book on courtship between the vampire’s teeth. 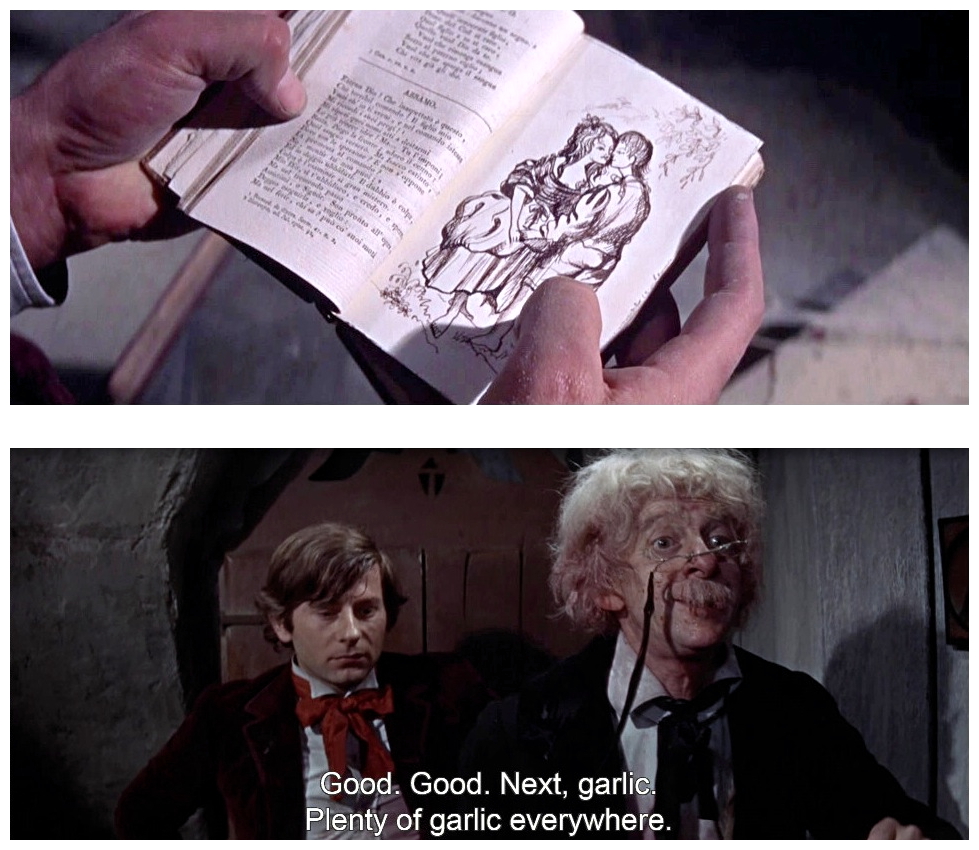 The evening is the occasion for a ball, for which the castle graveyard empties itself, one of the many shots reduced to absolute black-and-white. During the dancing, Abronsius and Alfred manage to lure Sarah away from the vampires in an extraordinary sequence played in sustained takes, climaxed when the trio are revealed alone in the ballroom mirror (actually a window behind which doubles of the actors perform). They escape from the castle and are pursued by a murderous hunchback on a coffin sledge but, in a final sequence, their plan goes astray and it is revealed that they themselves might spread the curse of vampirism throughout the world. Technically, The Fearless Vampire Killers is exceptional, with production design by Wilfred Shingleton, music by Polanski regular Christopher Komeda, and cinematography by veteran Douglas Slocombe: 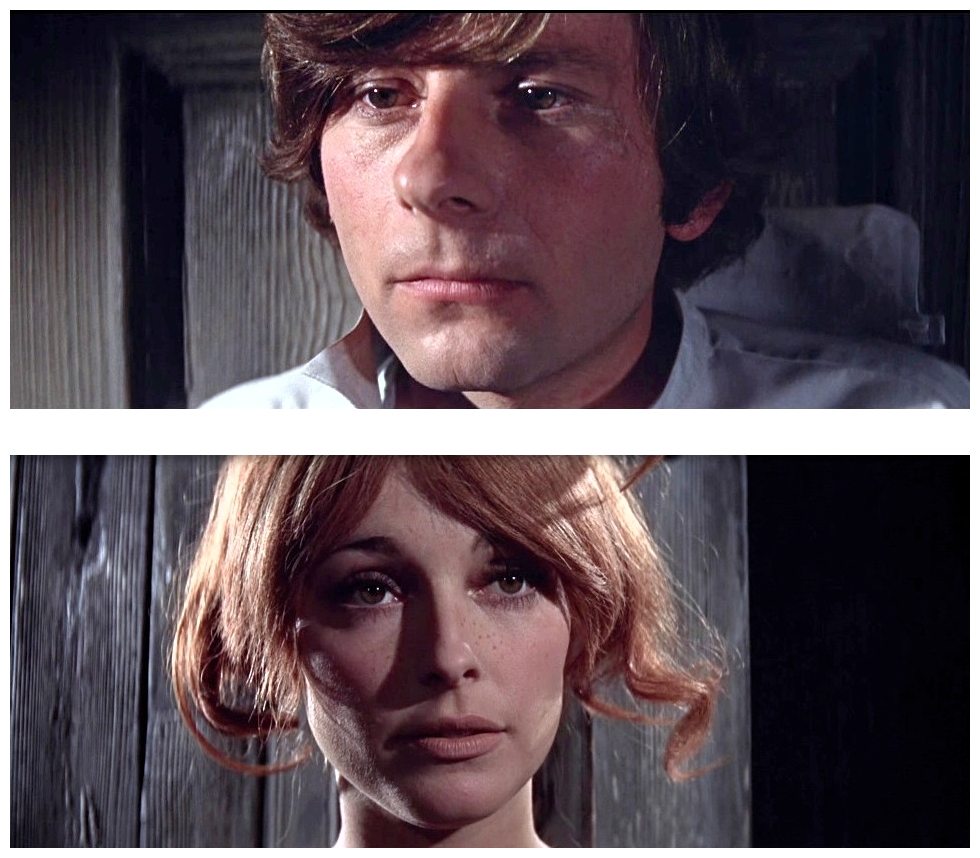 “I think he put more of himself into Dance Of The Vampires than into any other film. It brought to light the fairy-tale interest that he has. One was conscious all along when making the picture of a Central European background to the story. Very few of the crew could see anything in it, they thought it was old-fashioned nonsense, but I could see this background. I have a French background myself and could sense the Central European atmosphere that surrounds it. The figure of Alfred is very much like Roman himself – a slight figure, young and a little defenceless, a touch of Kafka. It is very much a personal statement of his own humour as he used to chuckle all the way through the scenes.” The Fearless Vampire Killers is not only one of the most accomplished of traditional vampire movies, it is also one of the most disturbing. Its innovation lies in its dark humour, reminiscent of Polanski’s earlier film Cul-De-Sac (1966). 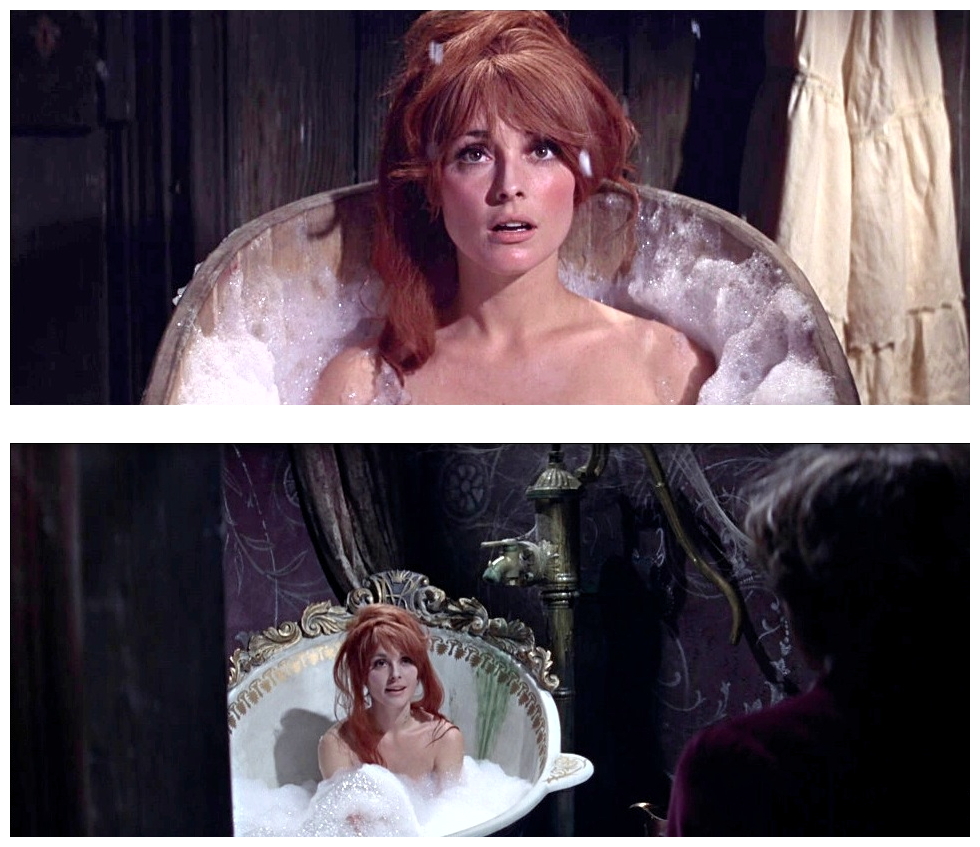 The ghoulish ball guests are advised that their event won’t have to make do with one solitary woodcutter for dinner, and they are shown Sarah, whose scarlet dress is the one fully saturated element amongst the decay. Abronsius comments, “You may be sure they will make her last, it’s their idea of fun.” The uncomfortable element of the film is this mixture of comedy with the traditional sado-erotic content of the English vampire movie. This is certainly true of Herbert, the mincing gay vampire, but it is most noticeable with Sharon Tate, who registered merely as an insipid starlet in films like Valley Of The Dolls (1967) and The Wrecking Crew (1968). Here she shows a delicious sense of humour and is made breathtakingly beautiful. The minimal dialogue is a help, but there is no mistaking the loving care with which her scenes are filmed. When she sits naked under the suds, with the count’s bite on her pale throat, playing comic scenes with her husband-director, the character of the material is unmistakable. Indeed, the word ‘Necrophile’ is used for the first time in an English-language feature film: “He takes me for a nincompoop, that necrophile!” 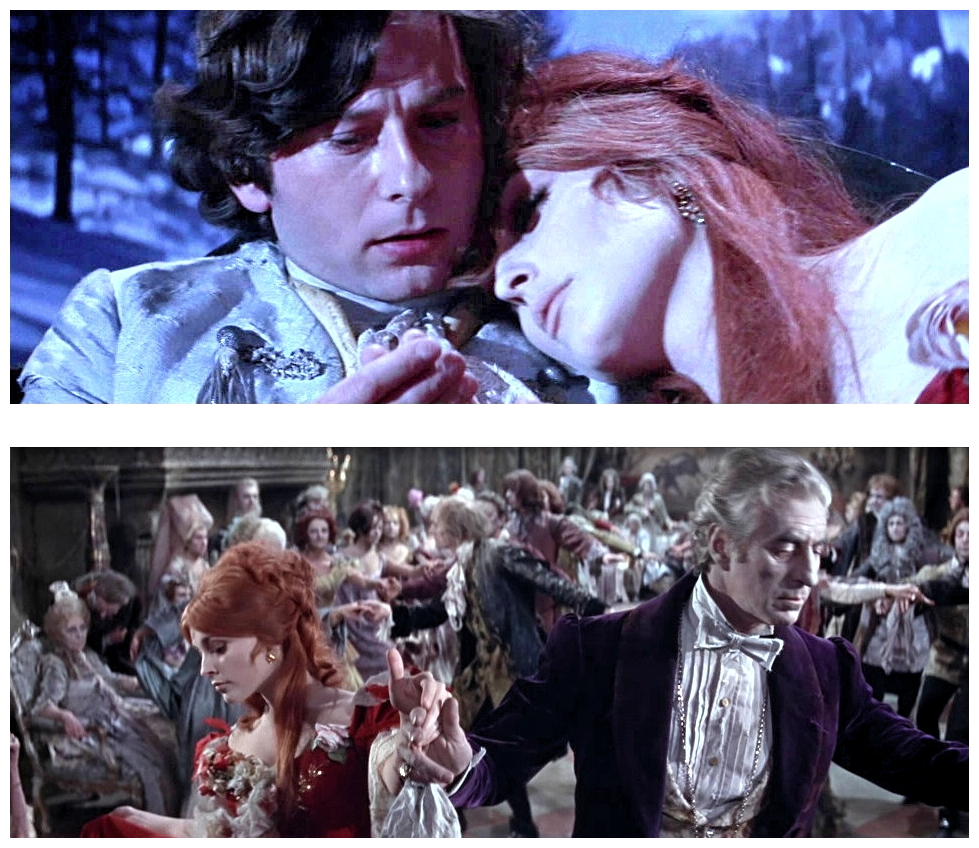 When the film was first released in the United States, MGM wanted to market it as a ‘comedy farce’ so they removed twelve minutes, added the animated prologue, re-dubbed Abronsius with a goofy voice, and gave it a silly subtitle: The Fearless Vampire Killers, Or Pardon Me But Your Teeth Are in My Neck. This mangled edition was the only version available until the early eighties, when MGM unearthed and distributed Polanski’s original edit. The director’s cut garnered plenty of new interest and forced many critics to re-assess their opinion. Since then, the original version of the film is the one more commonly seen today and has been released on VHS, Laserdisc, DVD, Blu-ray, and can sometimes be found on late-night television. Sadly, in 1969, Polanski’s wife and actress Sharon Tate was brutally murdered in macabre circumstances by the demonic disciples of Charles Manson in their Hollywood home. Two years later, Polanski was showing the gruesome murders in Macbeth (1971), the most blood-soaked of all Shakespeare plays and one with an undercurrent of supernaturally evil forces. ‘Fair is foul and foul is fair’ expresses Polanski’s world: ‘Life is art and art is life’. 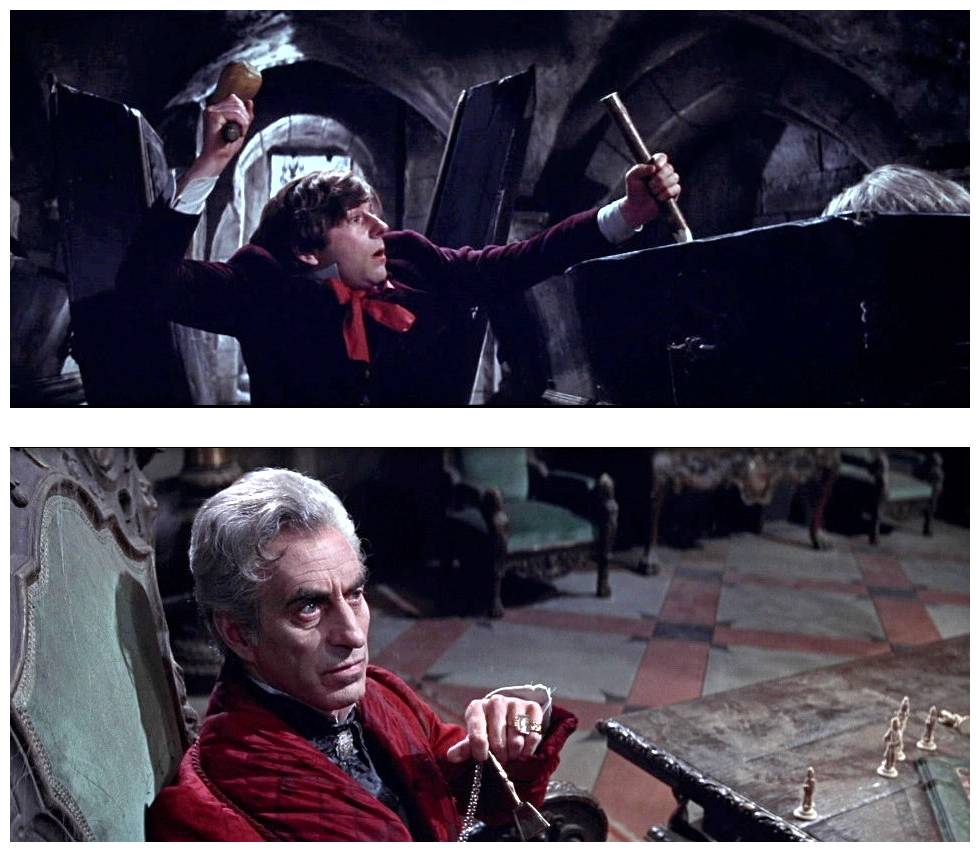 In his only Polish feature, Knife In The Water (1962), a simple sailing trip turns into an absurdist drama of sexual rivalry. Repulsion (1965) is about sexual disgust, and Cul-De-Sac (1966) is about sexual humiliation. What? (1972) is an Alice-In-Wonderland of sexual perversions, and incest is played up at the end of Chinatown (1974). Married couples are disturbed (in both senses of the word) by intruders in Knife In The Water, Cul-De-Sac, Rosemary’s Baby and Macbeth. Death And The Maiden (1994) marked a fine return to his old form, and this was followed by critical plaudits for The Pianist (2002) proving that, despite his amusing variability, Polanski remains a master of the medium he respects and loves so much. I’m well-pleased to have been able to discuss this piece of high quality cinematic art for you, I feel it has restored my artistic credibility. Stop that giggling! Ahem – so watch out for vampires and tread carefully the cobbled streets of Transylvania, until next week when I return with another daring shriek-and-shudder shock sensation found in that steaming cesspit known as Hollywood for…Horror News! Toodles! 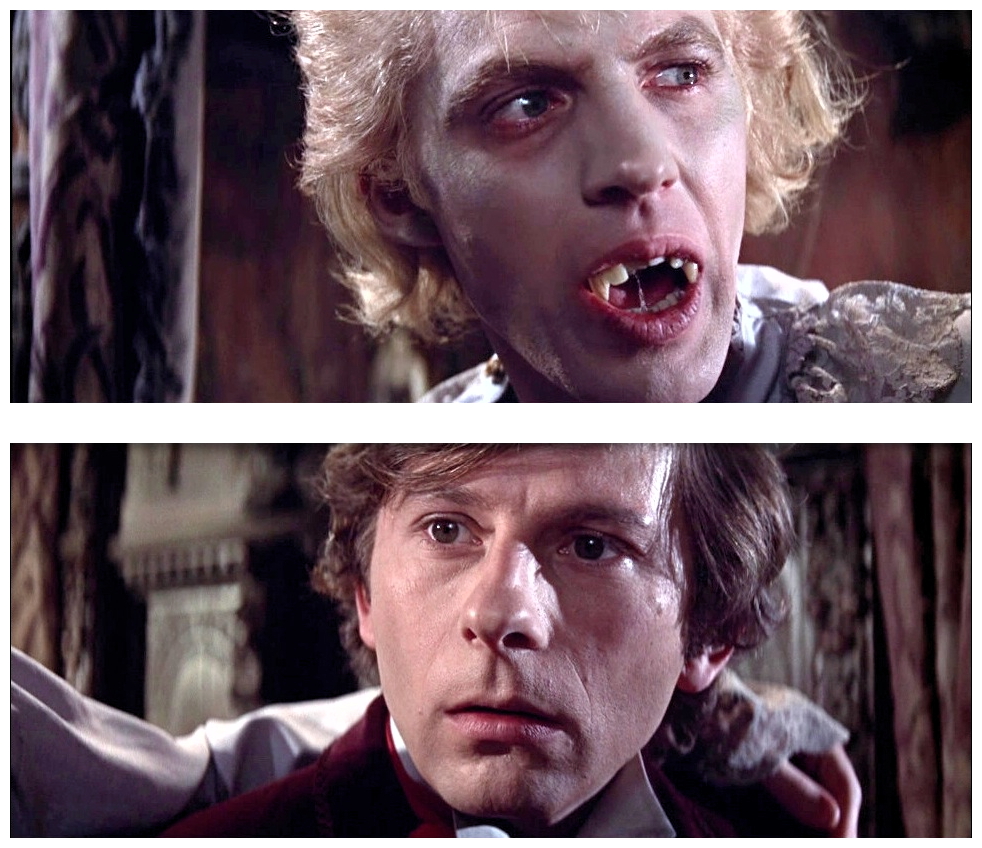