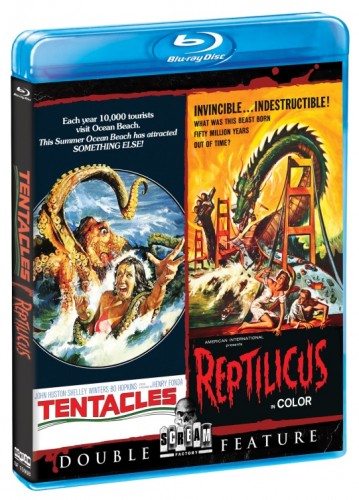 A nightmare begins for the small, coastal town of Ocean Beach when a baby disappears and a sailor washes up, stripped of his flesh. Something is lurking in those murky waters and it appears to have something to do with the digging of a deep sea tunnel.

Tentacles is an Italian/American monster flick directed by Ovidio G. Assonitis (credited as Oliver Hellman) and features the quiet spoken but persistent ‘big city’ reporter Ned Turner (John Huston) who want to find out what the source of the killing is. Turner enlists the help of the oceanographer and killer whale enthusiast Will Gleason (Bo Hopkins) and together they find that all signs point to a giant octopus that is causing havoc due to the use of experimentally high frequencies in the tunnel’s construction. Things get ugly when Gleason’s wife is killed at sea and Will enlists the help of his aquatic mammal pals to end the octopus’ reign of terror.

During the 100 minutes that the viewer will need in order to endure Tentacles, they will be underwhelmed by the dialogue, special effects and soundtrack that are featured in this dull movie.

With the high profile of some of the actors and actresses, you could be led to believe that the quality of acting in Tentacles is great but this, sadly, is not the case. The dialogue is generally delivered in a flat, emotionless way which gives the impression that the actors are reading their lines for the first time. The main culprits are the two Trojan Tunnels big wigs, Henry Fonda and Cesare Danova, who talk with such a lack of articulation that they a source of unintentional humour.

Special note should be given to the English dubbing that is used over the top of some of the Italian actors and actresses and seems to have been recorded in such a way as to not get in the way of the aforementioned dialogue deliveries. My particular favourite example occurs in the very first scene where a mother is talking to her child in such a creepy, false way that the words “Billy can go click-click, can’t he?” will forever haunt my dreams. 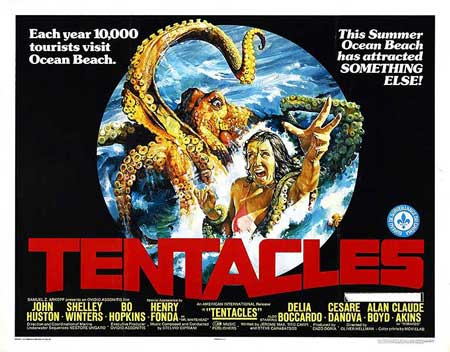 An impressive aspect of Tentacles is the camerawork. The underwater scenes, in particular, are brimming with atmosphere. The contrast in colours and mood between the shots of the sunny town and the dark sea are one of the few elements which provide interest to the audience. However, the build-up to finale is handled in a rather strange manner through the use of a bizarre start/stop montage which makes the scene a little hard to follow and does nothing to add required suspense to this crucial moment. POV shots, ranging from the first person perspective of a corpse to the hilarious over the shoulder view of the murderous octopus, are used to ramp up the tension in key scene and do give the audience some much needed action.

The monster scenes are mainly comprised of extremely close up shots of a standard sized octopus to create the illusion of a giant cephalopod and this is backed up through the use of assorted rubber heads, eyes and tentacles. The epic final battle is realised using toy killer whales to antagonise a live octopus and is spliced with footage of real whales to try and convince the viewer otherwise. It would appear that the filmmakers spent around one million dollars of the film’s budget to create a life sized replica of a giant octopus which sank when put in the water. This episode may account for some of this film’s many flaws.

As a lover of 70s Italian film soundtracks and a former electronic music student, I thought that Tentacles would scratch an itch with its musical elements and although some audio effects border on irritating other examples set the atmosphere effectively. There are some compositions which encapsulate the undersea horror through a disorientating mix of swirling synthesized sounds and tight disco beats but these moments are completely overshadowed by the almost constant use of a short, jarring harpsichord phrase in the first half of the film. Its appearance is sometimes completely random and it is used in scenes that have no tension whatsoever. 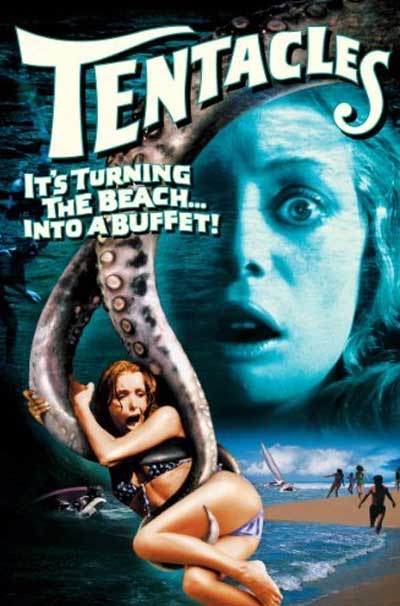 Tentacles is certainly not the worst film I’ve ever seen but it was slow moving and the action scenes did not deliver. There are moments of amusement but these are provided in ways that totally take the viewer out of the moment, such as Vicky Gleason’s obnoxious family, Tillie Turner’s ridiculous hat and a smattering of fat jokes in the movie’s first half. Beyond this, we are left with a film marred by dire dialogue, shoddy effects and a run time that outstays its welcome.