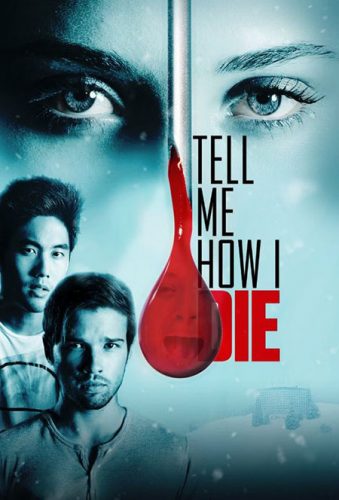 When a group of college students take part in a clinical drug trial, an unexpected side effect of the experimental medicine gives them terrifying visions of their own deaths…which begin to come true. As they scramble to escape their fate, they discover that the killer is among them and shares their ability to see the future – only he seems to be one step ahead of their efforts to survive.

I lived in Michigan for a year an a half, and while I lived there I worked at a Walmart for a while. One day I found out it was the 95th birthday of one of our door greeters. I was pretty amazed since the guy looked at least 20 years younger than that. When I said that to the man, he told me his goal in life was to reach 105 and be shot to death by an angry husband. At that point, I realized I kind of loved the guy. I bring this up because I’m pretty sure that in the movie Tell Me How I Die, some of the characters wished that the forecast for their deaths were as equally amazing as that fellow’s plan.

Tell Me How I Die tells the story of a bunch of college-aged kids who agree to take part in a drug trial for A9913. The drug is supposed to improve our memories, allowing us to have total recall of even the foggiest of recollections. Of course, I find that kind of terrifying because I’d hate to be able to recall watching Crazed, and I’m having enough problems repressing the memories of that flick as it is. Anyhow, as part of the trial, their car keys and phones are confiscated because secrecy is of utmost important to the company running the tests. Shortly after the would-be miracle drug is administered, some of the subjects start having flashes of events that are about to happen. If these premonitions were of picking flowers or other peaceful activities, we wouldn’t have much of a movie. Nope, these poor schmucks get to see each others’ gruesome demises. Adding to their plight, a nut case has gotten into the facility, anxious to make the dire predictions come true.

Now, I must have done something right for this site’s High Sheriff to let me watch this movie, because once again I got to see a film that does something new with the slasher genre. This movie pretty much rocked. The idea of people having flashes of the future adds a whole new wrinkle in the slash and stalk formula. Because you’re never entirely sure if the events you’re seeing is actually happening or another horrifying glimpse into the future, you’re always kept guessing. It also adds tension because you’re not sure if the prophecies can be avoided. Most of the visions comes true despite the best efforts of our characters, which makes their desperation even more palpable.

Director DJ Viola does an excellent job of keeping us on our toes. His use of music, imagery, and setting really created a claustrophobic, tense atmosphere. By choosing to have the movie take place during an extreme snow storm, Viola managed to make the characters feel trapped and isolated no matter if they were inside or outside the building. He had everything well-paced and never let the film drag. Everything was slickly shot and made this movie look like it had a higher budget than it did.

Most of the characters were likeable, with Virginia Gardner as Anna and Nathan Kress as Den giving some pretty solid performances as our leads. The character Scratch as played by Ryan Higa provided some humor in the movie, and I found him to be the person I rooted for the most. The ever reliable William Mapother added a lot of credibility to the cast, bringing his “A” game as usual. If there was a complaint about the cast, it was Mark Furze as Marcus. He wasn’t terrible in the role, but he seemed to not bring anything to the character beyond high-level douchebaggery. To be fair, that may be more of the fault of the script than the actor.

Another thing that didn’t quite click was the main villain. While he had a certain level of creepiness, he didn’t quite have the presence of other slasher movie antagonists. He didn’t seem to have that same level of menace or seeming indestructibility that Michael Meyers or pre-zombie Jason Voorhees did. I never found him to instill much in the way of dread. He seemed more like a reject from a ’90s Pearl Jam concert. With that said, he at least had a very good motivation for his actions. IT should also be pointed out that the flashes into the future provided by the drug also created a chance for the movie to “cheat” a little at the end, which only serve to cheapen the resolution. 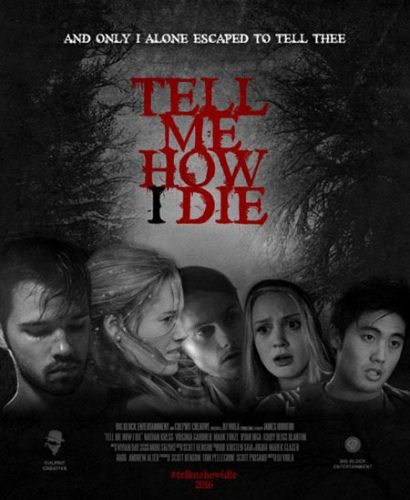 While there’s no nudity, there is multiple stabbings, slashings, and even a bit of chemical warfare thrown in. Great fun to be had, so don’t pass this one up. It’s well worth your time.