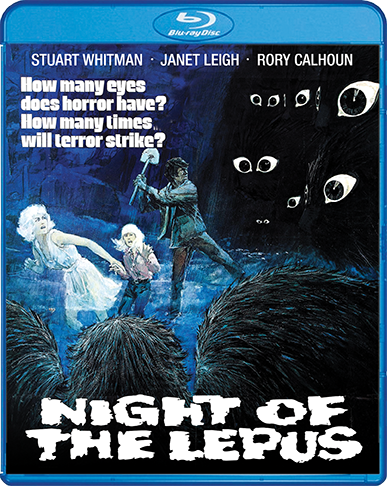 When a population explosion of wild rabbits threatens his land a rancher turns to a pair of ecologically minded scientists for help. But their scientific miracle creates a whole new problem… of gigantic proportions!

The post Star Trek-Original Series years weren’t kind to the cast who quickly fell victim to typecasting or were just plain forgotten. William Shatner eventually resorted to taking on America’s entire tarantula population in 1977’s genuinely creepy Kingdom of the Spiders. But fans forget that Captain Kirk’s sidekick Bones McCoy (Deforest Kelly) had already battled another of God’s irate creatures in Night of the Lepus (1972). Unfortunately, while Shatner got crawling spiders, Kelly was up against nature’s very definition of benign cuddliness—bunny rabbits. Night of the Lepus stands as living proof that you can inflate rabbits to the size of grizzly bears, dub in lion’s growls and slather them in human blood … but they’ll still be frigging adorable. 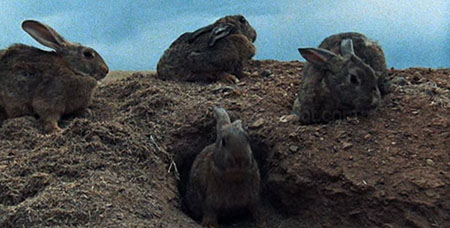 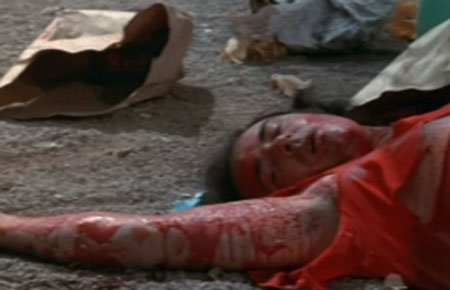 It’s actually more fun to imagine the pitch meeting for Night of the Lepus than watch the film. I mean just how did the producers manage to sell MGM on a concept that sounded like its own Mad Magazine satire?

Ironically, Lepus is based on a work of satire—Russell Braddon’s comedic Australian novel Year of the Angry Rabbit (1964), wherein Oz’s Prime Minister employs hordes of mutated, flesh-eating rabbits to achieve world domination. The movie threw away the novel’s political and satirical elements, leaving only a giant monster movie that, by 1972, was already fifteen years out of fashion. Somehow the blend of a well-reviewed book, reliable folks behind the camera and a B-plus cast convinced MGM to pony up a fair amount of dollars. Although Lepus isn’t a big budget movie it isn’t a schlock job either; the cast is solid and every technical aspect is perfectly competent—except for the crucial monster movie angle. 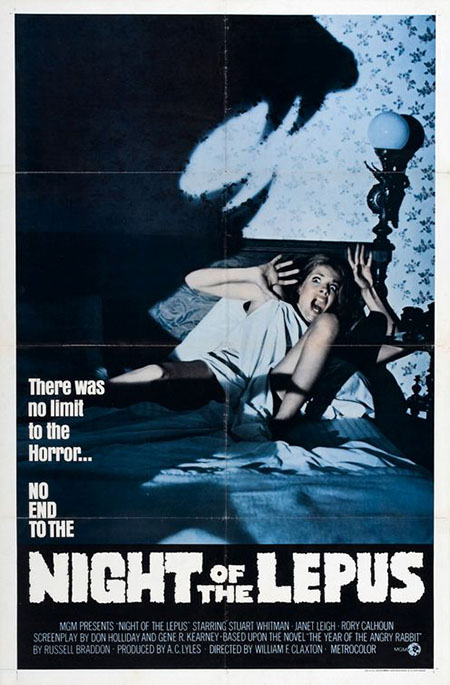 Night of the Lepus Director William F. Claxton was a television veteran known for westerns (The Rifleman and Bonanza).  Producer A.C. Lyles was also an old hand at westerns, as well as being the guy who gave Deforest Kelly his first acting break. This combination explains the film’s distinctly cowboy movie feel, complete with stalwart rancher Rory Calhoun defending his land from mutant rabbits that could just as easily have been murderous rustlers or a band of renegade Apaches. The cast of sagebrush vets probably brought their own boots and Stetsons to work. Even the hordes of rampaging Cadbury bunnies are shot like a charging herd of Buffalo. It’s painfully obvious the filmmakers would rather be making a straight up western without the whole monster movie angle; a genre they clearly don’t get. 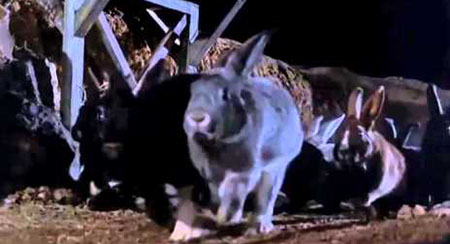 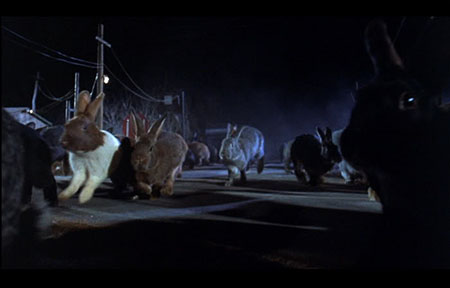 Their lack of confidence in the genre (and premise) is clear from the film’s opening scene—a pseudo television news piece warning viewers that uncontrolled rabbits breed … like rabbits. It also manages to shoehorn the word “lepus” and it’s definition into the narrator’s spiel, just in case audiences were confused.

From there we meet rancher Cole Hillman (Rory Calhoun) whose livestock are endangered by a population explosion of burrowing rabbits. Hillman is forced to shoot his horse after it trips in one of the rabbit’s ankle-breaking holes. He breaks the news to his preteen son in true cowboy style. “Ranger broke his leg, so I shot him. Now go pick up my saddle.” It really warms the heart.

Using a control group of rabbits the scientific duo test an experimental hormone treatment. Being horrible 1970s parents they also allow their daughter to wander around their animal research lab unsupervised and play with the animals. Don’t be too hard on them; negligence was pretty much considered go-to parenting back then—it’s a miracle any of us ’70s kids survived to adulthood. Through some merry mix-ups and parental neglect, a rabbit shot full of experimental drugs, gets loose on Hillman’s ranch and the hare-raising fun begins. I’m not apologizing for that.
Unfortunately, the rest of the film is endless dialogue intercut with shadowy hordes of giant rabbits stampeding through the desert. These aren’t CGI creations, just plain old pet shop rabbits hopping over toy trucks and barns. They’re so cute you’ll probably start naming them by their second appearance. Occasionally stunt men in bunny costumes leap onto helpless bit players and brutally smear them with red paint. The blood is that perfect early-seventies shade of tempera red that always reminds me of kindergarten finger-paints. 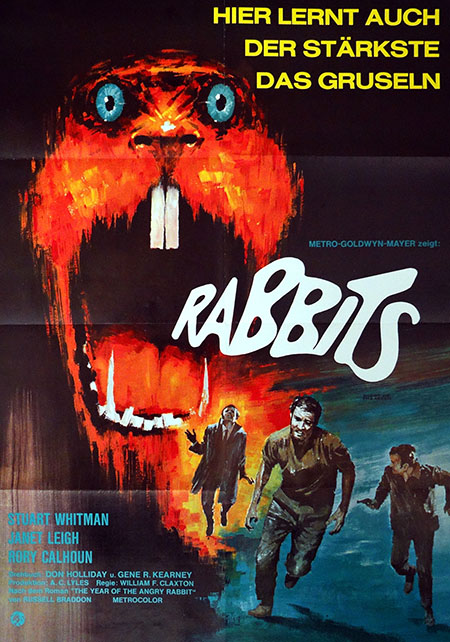 In the hands of a more shameless director like Lee Frost (The Thing With Two Heads, Black Gestapo) Lepus could have been barrels of fun. The problem is that director Claxton and his pals continuously try not to embarrass themselves, and in doing so create something highly competent yet utterly soulless. Often the film inexplicably goes out of its way to negate suspense by alerting the heroes to the monsters’ whereabouts before they’re in any mortal danger. Other information is repeated endlessly, presumably for the benefit of drive-in patrons who were going at it like bunnies in the back seat. Even when the National Guard arrives they do nothing but talk. Lepus feels like a ninety minute missed opportunity.

But a few brief moments of joy manage to sneak through the tedium. Standouts include the first killing, when the attacking rabbit roars like a lion while its burly truck driver victim shrieks like a little girl, or when a deputy uses a megaphone to address the crowd at a drive-in theatre announcing, “Attention, there’s a herd of killer rabbits headed this way and we desperately need your help!” Not only does the drive-in crowd believe the deputy, but obediently follow him to act as giant rabbit bait. These moments almost make Night Of the Lepus worthwhile … almost.
In short, Night of the Lepus is a film that played coy when it should have gleefully rolled around in the ridiculousness of its concept. There are a few choice laughs and it’s entertaining to watch the cast of professionals play it dead straight. It helps that the truly ridiculous dialogue was respectfully left to the day players.  If you really yearn for a dark, frightening film about rabbits just check out the brilliant animated film Watership Down, which has been scarring viewers young and old since 1978. 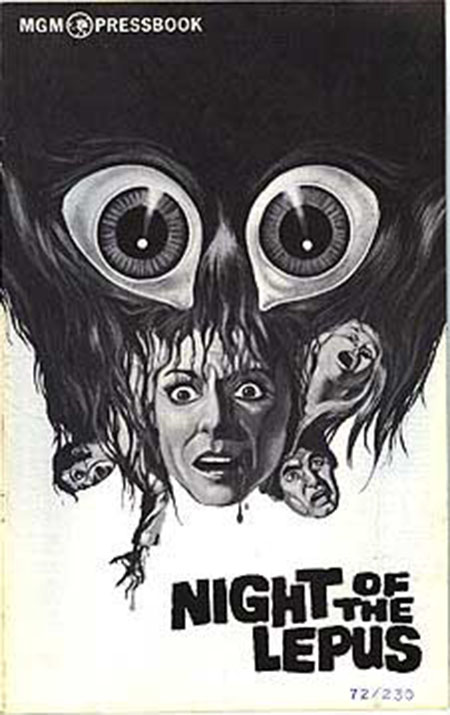 So many of these bad films end in tragic stories of failures and drug overdoses—it really gets depressing. But I like to end things on positive notes, and have happy endings—so here we go.

•    Hundreds of rabbits appear in the film and, despite a few shots where the bunnies get a tad close to fire, it appears they were unharmed. Unconvincing stuffed dolls were obviously used as doubles during bullet-hit and explosive sequences. So you can consider Night of the Lepus cruelty/guilt free viewing.

•    Within five years of this dud, Deforest Kelly was earning a comfortable living appearing at Star Trek conventions before grabbing the big dollars from the movie franchise.

•    But the biggest surprise is Stewart Whitman who, despite never becoming an A-List leading man, invested his money wisely. Now in his eighties, Whitman has amassed a fortune estimated at a hundred million dollars!

•    After production wrapped, the lead rabbits were adopted and have since given birth to 150,000 children.

See, not every bad movie has to end badly. 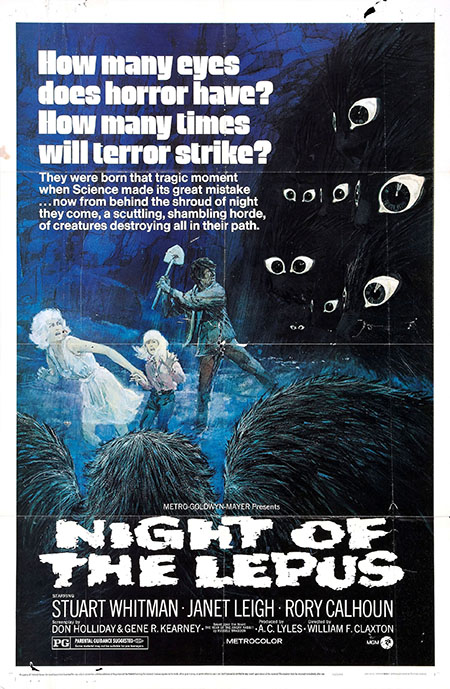