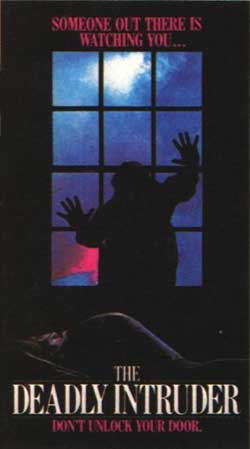 A woman is terrorized by a homicidal maniac who recently escaped from a mental hospital.

I vaguely remember my mom and dad renting Deadly Intruder from our local video store one summer back in the 80’s but I didn’t really pay much attention to it as I was too involved with playing with the new G.I. Joe toys I’d gotten for my birthday. I hadn’t seen it since and hadn’t really thought a whole lot about it so when I saw it again recently it was sort of like I was seeing it for the first time. While it isn’t very original and is very similar to many, many other slasher films that came out around the same time I still thought that it was entertaining and it had a pretty nice twist toward the end that helped keep things interesting. It wasn’t the best slasher flick to come out of the 80’s but all in all it really wasn’t that bad at the same time and was a nice way to kill 90 minutes. 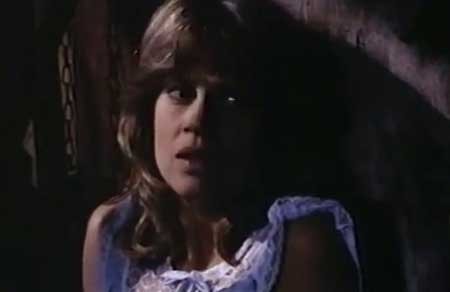 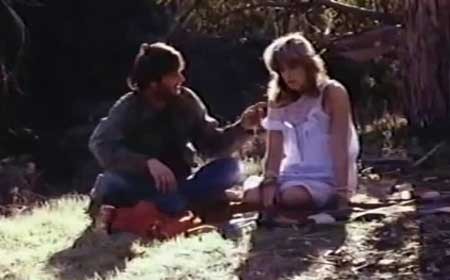 The plot is nice and simple and you really don’t have to use your brain while you are watching it. I’m not saying that as a bad thing, I’m just telling the truth. Essentially it is just a movie about an escaped lunatic running around killing everyone he comes across before he becomes fixated on a woman (played by Molly Cheek, who is Jim’s mom in the American Pie movies) who lives out in the middle of nowhere all by herself. As I said earlier the many of the scenes that take place early in the movie are very similar to a lot of other slasher flicks as we follow along as the killer takes out a bunch of people in some cool and painful ways (I felt bad for the poor old auto mechanic as he probably gets the worst of it out of all the killer’s victims). It’s obvious to me that writer Tony Crupi (who also appears in the film) was heavily influenced by Halloween as a lot of the things that take place in Deadly Intruder reminded me of that film (including the score). While it is a pretty simple, by the number slasher flick for the most part it does have a nice little twist toward the end that I didn’t see coming that helps it stand out among the crowd. 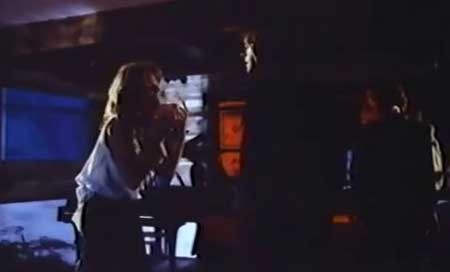 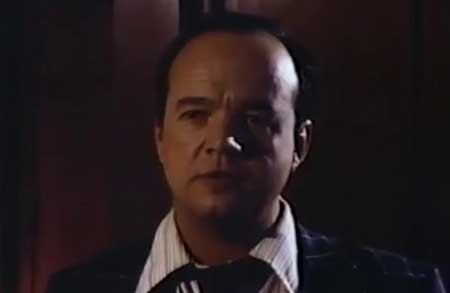 I think that the acting is actually pretty good in the film too. Molly Cheek does a great job as Jessie and I couldn’t help but feel for her as she struggles to survive after the psycho sets his sights on her. Without giving anything away let’s just say that she goes through a hell of a lot in this movie and her performance was realistic and believable. Tony Crupi also does an excellent job as the drifter that Jessie helps (even though she probably shouldn’t have as she soon regrets doing so) and comes off as effectively creepy and out there. Hell, even Danny Bonaduce shows up and does a great job in the role of John. I thought that he played a very likable character and hated that he ended up dying in a pretty hardcore and nasty way. Without a doubt the acting in this film was a little better than what you usually see in most slasher flicks and I thought that everyone did a terrific job for the most part.

I was happy that Deadly Intruder had a lot of cool death scenes as well. We get some pretty good stuff such as fun with an axe, a kitchen sink drowning, a face shoved down on the fan blades on a car motor, a head through a television set, and my personal favorite that involves someone being crushed to death when a car he is working on is slowly lowered on top of him. The killer in this movie doesn’t mind getting his hands dirty and if you are like me and enjoy a movie that features plenty of awesome death scenes then you won’t be disappointed with this film as it definitely delivers. 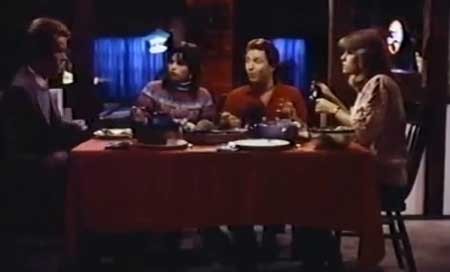 The only negative thing I can say about the movie is that it spends too much time on a certain character toward the beginning which is a bit unnecessary as he dies pretty early on. He has an entire scene devoted to him where we get to know him and then he is taken out seconds later when he appears on screen again. I thought that he was going to play an important part in the film since he has such a long scene at one point but it just wasn’t the case and seemed a little confusing to me. It just seemed a little pointless to me that he gets so much attention early on and is almost set up to be the hero of the film only to be one of the first people to get killed off in a pretty forgettable manner. I don’t know if he was supposed to play a bigger part and the actor playing him had to leave the project for whatever reason or what, but his overall fate just seemed a little weird to me after he gets such a build up at the beginning of the film.

I enjoyed Deadly Intruder. I thought that it was a fun and interesting little slasher flick and even though it wasn’t perfect it was still entertaining. In addition to so great death scenes, likable characters, and a cool twist I dug the ending and thought that it was a very nice touch (it ends on sort of a downer that could have led to a sequel had the people behind it wanted to do one). I had a good time watching it and think that if you enjoy 80’s slasher flicks that you will too. Check it out if you run across a copy of it, you might just be pleasantly surprised.