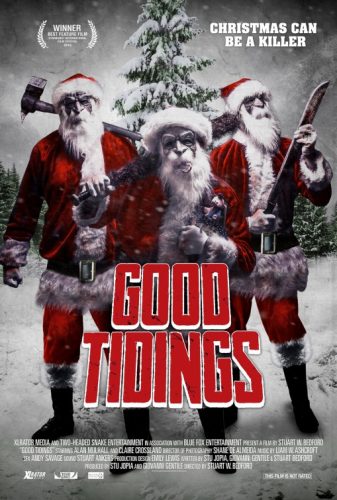 A homeless war-veteran with a chequered past must rely on a side of himself once thought buried when he and his companions are targeted by three vicious psychopaths wearing Santa suits on Christmas Day.

We’ve been seeing a lot of horror films released that take place during the Christmas season. To be honest, I’m surprised we don’t see even more. After all, no other holiday seems to make people lose their minds like Christmas. You don’t see people clubbing each other like baby seals over Halloween candle or re-enacting their favorite parts of Battle Royale over getting Thanksgiving turkeys. Just watch the news during Black Friday sales and tell me that there isn’t room for a movie about a masked maniac chopping people into kibble over getting that special Midnight Madness sale. The tagline could be “They were slashing prices, now he’s slashing them.” Hey Hollywood, if you take that idea, please be sure to spell my name right. 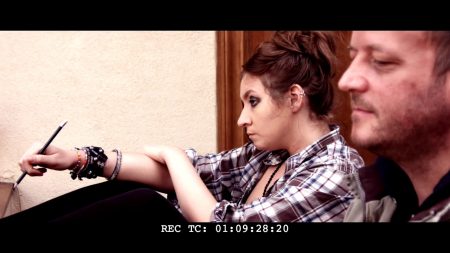 In the film Good Tidings, we get to see the story of three psychopathic murderers dressed up like Santa Clause go chop-happy on a bunch of homeless people squatting in an abandoned police precinct. Sam (Alan Mulhall) is one of those homeless folks. He’s an ex-military man who’s daughter’s death caused his marriage to fall apart. Having been living on the streets ever since, he’s taken it upon himself to gather other homeless and bring them to the precinct for shelter. Sam’s created a community of people he cares about, and he’s forced to draw on his military experience to try to save what’s left of them from the three twisted Santas that definitely belong on someone’s naughty list. 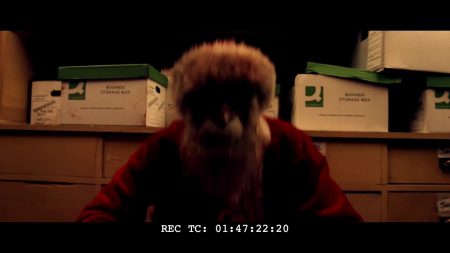 Let me say that this movie rocked. It moved at a very fast pace and kept the excitement going. Even in the beginning, before our Psychos Three make their appearance, the movie never felt like it was dragging while it took the time to establish some of the characters and their relationships. Once the blood letting starts, the movie never lets up. The Santas lock everyone in, start setting traps, and then begin playing sick games with everyone. You never really know what the Santas are up to or what they’ll do next. Their unpredictability adds layers of tension to every scene they’re in. 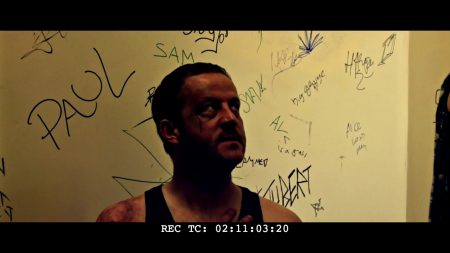 The performances are pretty solid, but the main focus is on Sam and his relationship to his people. As you learn a bit about his history, you can see that all he’s really doing is making a new family to replace the one he lost. It adds a layer of believability to why he would go out of his way to try to protect everyone. Another aspect I appreciated is that even though Sam’s ex-military, the director didn’t have him turn into Rambo. Sam is all too human, and his training and experience only carries him so far. He’s still vulnerable facing fairly steep odds. Alan Mulhall was pretty good in adding depth. 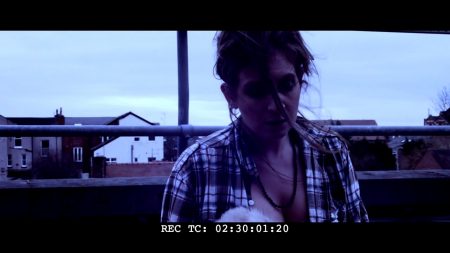 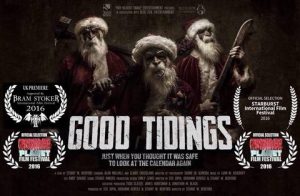 Another shout out has to go to our Santas (named Curly, Larry, and Moe in the credits). All three actors do a marvelous job of being menacing in every scene their in. They don’t have any lines, but through their body movements they’re able to make themselves stand out from one another. Acting is harder than most people realize, and even harder when you don’t have any dialogue. These guys nailed it.

While I don’t always pay too much attention to the musical score, I’m still aware of how important it can be to each scene to help establish a mood. The music here was an ’80s inspired synth score that brings to mind many classic slasher flicks. When the killers are stalking through the halls, the composer plays a classic Christmas carol. However, his use of synthesizers twists that carol into something dark and twisted. The moment that music played, the tension ratchets up a few more notches. Excellent work there. 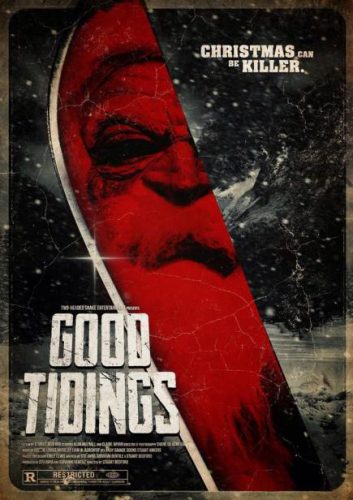 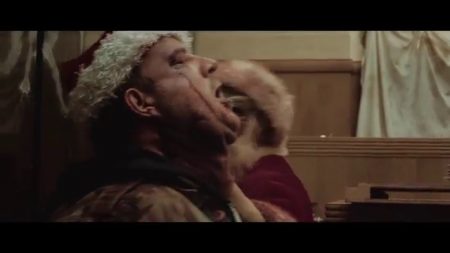 The most I can really complain about is that a lot of the other characters aren’t given a lot of development, so they’re plight is only impactful in how it affects Sam. We also don’t know where the psychos come from, even though one can make a few assumptions based on how they’re dressed when we first see them. Other than that, there’s not much to complain about. Under Stuart W. Bedford’s direction, you get one hell of a slickly shot flick that isn’t afraid to get bloody. Interesting villains, fantastic score, and relatable characters. Check it out.