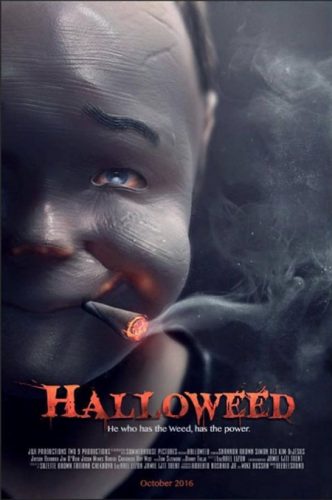 After his serial killer father is put to death, Trent Modine and his stepbrother Joey, seek a new start. They land in Mooseheart, a town with potent weed and legends of a Candy Corn Killer.

I don’t smoke marijuana. Therefore, ‘Halloweed’ is not a movie that had any intention of ever being seen by me. If it was called ‘Hallow…Binge Drinking to the Point of Blindness,’ that would have been more for me. Those who do smoke pot might find this a comforting slice of caricature. Even though I don’t partake I know plenty of people who exclusively talk about weed and weed adjacent subjects. So it’s not a culture shock to see this.

As a horror movie it’s a standard slasher, not offensive or interesting in anyway. I promise it will in no way harsh your mellow. That is unless you’re specifically scared of the grown man in a chubby child’s body Andy Milinokis… which is understandable.

The extent that this film has anything to do with Halloween includes several scenes with small pumpkins in the backgrounds and cobwebs on some bannisters. It also has its climatic, and that is a very loose term, unmasking of the killer at a Halloween party with a total of around nine guests. This is explained as people being afraid due to the serial killer on the loose.

The person doing all the killing in Mooseheart is the Candy Corn Killer. His costume is a baby mask resembling a less terrifying Booji Boy from Devo and footie pajamas with cartoon frogs. What does a baby in pajamas have to do with Candy Corn? What does he have to do with this particular town? What’s the legend? It’s never explained. He sprinkles the disgusting confectionary onto his victims, apropos of nothing. Every plot point and character decisions throughout feels this level of logical happenstance.

Simon Rex is perhaps better known by someone who would seek out a movie called ‘Halloweed’ as the rapper Dirt Nasty. Simon is the other main character playing the stepbrother of Shannon Brown’s Trent Modine. Most of the weed related intangibles are built around his character of Joey. Until the last twenty minutes he is in a totally separate film concerning selling weed for Danny Trejo.

This second storyline features several references to Joey being gay and a former male prostitute. It’s not witty or clever, but there is something undeniably likable and charming about Simon Rex. Having honed his talents on the post Wayans Brothers Scary Movie films, he’s very at ease delivering ludicrous one liners, exclusively about drugs and gay sex. He is also a sure thing if they ever feel like rebooting the ‘Ernest Goes to…’ franchise.

Hoping to further complicate things, a third plotline is also introduced featuring Jim O’Heir of Parks and Recreation, and Ray Wise of nearly everything ever. They are competing with each other for the office of Mayor. Whoever’s the mayor in Mooseheart it seems is on par with a Roman emperor.

None of these three stories running into each other is particularly interesting. Characters seem to come and go into scenes without purpose. References are made to off-screen events that change the story. It’s a slapdash script where the characters seem like bystanders in their own story. 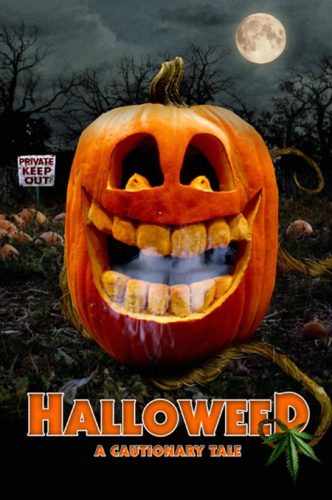 There’s nothing attention grabbing about ‘Halloweed.’ It’s a juvenile comedy for people too stoned to handle an actual plot. It’s most certainly not a horror movie. It feels like a relic of a bygone era where it was enough to make poop jokes and talk about smoking weed. It’s not 2001, and opening titles that look like they’ve been created on a computer running Windows 95 seem painfully dated. No matter my fond memories of ‘Homestar Runner.’ With hundreds of movies coming out every month, this shouldn’t be anywhere near a list of must watches. If you are however too high to move, this is goofy enough to certainly enlist a few chuckles.