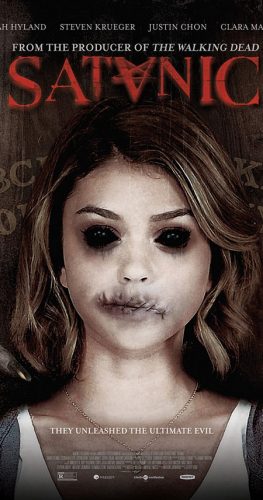 Four friends on their way to Coachella stop off in Los Angeles to tour true-crime occult sites, only to encounter a mysterious young runaway who puts them on a terrifying path to ultimate horror.

What makes a deal with the devil legally binding? From Faust to The Devil and Daniel Webster to The Devil Went Down to Georgia, we’ve seen folks agree to such contracts, but they’ve always known what they were getting into. The characters in “Satanic” never make any such deal, at least not knowingly, but they’re still stuck with the ramifications. I don’t think it would hold up in court.

The films starts with a pre-credits montage of Satanism through the years. We see historical footage of Anton LaVey among others. It’s a very thoughtful opening to the film, and it prepares the audience to take what they’re about to see seriously. I wrote in my notes, “this movie might have something to say.” Looking back, I can’t say for sure if it did or not.

The film proper starts by following four college students on Spring Break. They’re taking a self-guided tour of Los Angeles’ most famous Satanic sites before heading to Coachella. They pop by a Church of Satan, the site of the Labianca /Tate murders, and a hotel where a human sacrifice may or may not have took place.

Shenanigans eventually ensue. While trying to crash a Satanic ceremony, the gang causes trouble for one of the members, Alice. Alice ain’t right in the head. Oblivious to all the red flags, and feeling bad for her, they invite Alice back to their hotel to party. After a few drinks, Alice has a swell idea. Let’s perform a ritual. Everyone take hands…

I won’t say much more about the plot other than to point out the gang will regret this decision.

“Satanic” succeeds in many places, but fails in others. Starting with what works, the movie is beautifully shot, especially several shots of the L.A. skyline. Director Jeffrey Hunt must be in love with the city, and the film definitely turns Los Angeles into a character. Mr. Hunt also provides an excellent soundtrack. You will find yourself Googling the names of the bands that provide music.

Not surprisingly, “Modern Family” star Sarah Hyland delivers a solid performance as the innocent Chloe. I don’t know if she’s slumming, loves horror movies, or owes money all over town, but she is a blessing to this film. If she wanted, she could be a first-rate scream queen. Sophie Dalah is good as well as the unbalanced Alice. 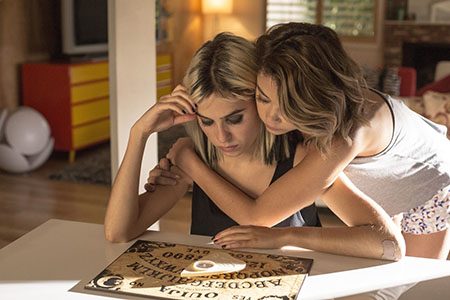 That being said, there are some serious flaws that keep the movie from being an unqualified success. Number one is the script. The dialogue is bland and on the nose. And you could make a drinking game out of all the times someone say, “welcome to L.A!” The four main characters aren’t given any substance. They’re annoying stereotypes. They’re a 50 year old’s idea of how millennials act and talk. Hyland and Dalah are able to rise above the material, but the rest of the cast is not. For a horror movie to be truly horrific, you have to care about what happens to the characters. It’s hard to care about these people.

Pacing is also an issue. The movie spends way too much time with the build-up, and the third act, while genuinely disturbing, is rushed. Since the characters are underdeveloped anyway, the supernatural elements should have come in much sooner. It also doesn’t help that the other Satanist in the movie are about as intimidating as a hipster on a pub crawl. 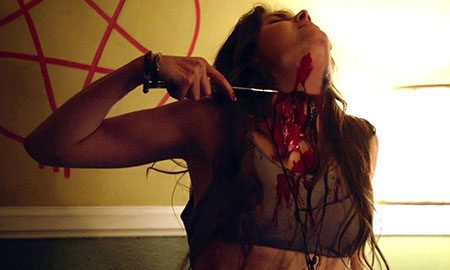 But I think what truly keeps the movie from being as good as it could have been is how it approaches the supernatural. Every great movie about Satan, whether it’s “Rosemary’s Baby” or “The Exorcist” has one thing in common. It believes in the supernatural. I don’t mean the filmmakers themselves, necessarily. I mean the movie presents the supernatural in a serious way. No great movie about Satan is agnostic. I’ve always found horror movies that imply horrors beyond mere death to be the scariest. That’s why I’d rather be killed by Jason instead of Freddy. “Satanic” doesn’t have that conviction. While it’s a decent movie, that keeps it from being great.