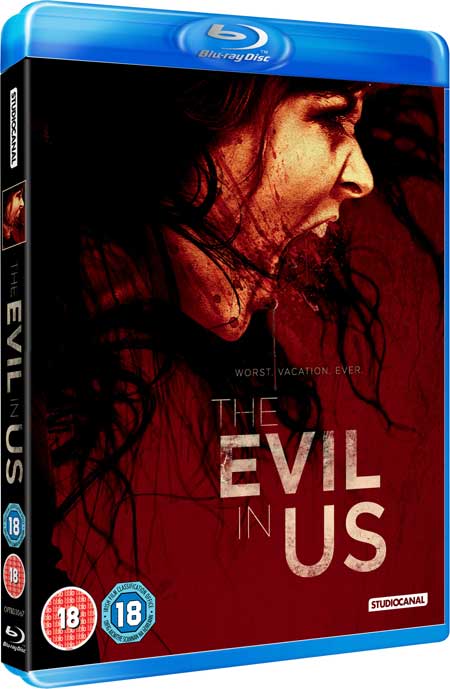 A rage virus disrupts a weekend getaway of a small group of friends. Meanwhile, a detective is hot on the trail of one of these friends in connection to a survivor of a party  that turned deadly.

The Evil In Us has three story threads, two of which collide by the end. The other thread is there for the final reveal.

The part that opens the film starts off with makes you feel the film has great potential. Two boys in blue are called to an apartment complex on a noise complaint. Apparently a party had gotten out of hand. Trying to gain access becomes difficult when there’s no response when they announce themselves at the door. The landlord lets them into the apartment where they find a mini bloodbath. In the apartment’s bedroom two bodies lay mangled on the floor one is on the bed. Much to the police officers’ surprise the one on the bed is still alive.

The case is given to a detective (John Gillich) to investigate. The trail leads to someone within the group in the next story thread.

This thread is the main bulk of the film and has many of its strengths and weaknesses. It concerns a group of friends who go off together to a cabin by a lake. The strengths are a good sense of plotting their story and the drama that ensues during this getaway. Also, the madness that happens as the one sought by the police exhibits signs of the rage virus that is within him. During these segments of relationship dynamics, unseen by the audience, others start to get infected. Nearly by the films hour mark, all hell breaks loose.

By this time, I was thinking that all the issues that I was forced to deal with had been worth it. Cringe-worthy dialogue, sappy sentimentality (with equally sappy piano music played in case you didn’t realize how sappy it was), and annoying characters. (There’s always annoying characters these types of films! Why?) Even though all these problems were mixed in with the good plotting and direction, they were a thorn in my side. A mix of good and the bad still has the bad. But, when the stuff hits the fan I really thought I could forgive all that. It really got that good. But, then the other story thread intertwine with the other two leads to something I couldn’t forgive.

This thread is the thinnest of the three. It’s set in a facility with people held captive, where at  least two people to a cell. In time, we realize that they are all lab rats in an experiment overseen by a sinister figure (Robert Leaf). As the film revisits this facility, the captives become increasingly more agitated and then more violent. As I’ve stated above, this thread leads to the final reveal of the film. It’s something that will anger those with a particular political point of view. Since I’m the opposite of this point of view I should have went along with this socio-political satirical ending. But, it is so heavy-handed, even for me (and trust me, I don’t usually have a problem with things with an in-you-face quality), that it just killed the rest of the film, in my opinion.

I really don’t like the task of trashing a film from a first time director filled with a cast of mostly newcomers. But, I’m afraid I’m going to have to here. Though it should be noted that there is promise here, for I believe that writer/director, Jason William Lee does have talent. He has a tight focus and great attention to detail. But, truly, this was a very hard film to review. It was like so much good cradling so much bad. It was hard to gauge what was the stronger of the two. What I liked I liked a lot; but, what I didn’t went from annoying to hatred. My hatred went mostly to the last few minutes. We’re talking heavy palm to face here. 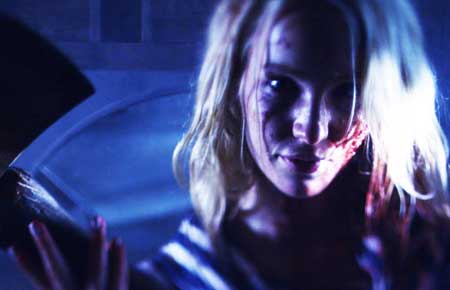 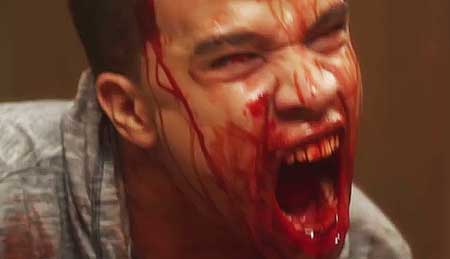 Besides the objection I’ve already stated above in regards to this last part, there’s a matter of the underlying theme. If you take the theme that is suggested by the title and what happens during the main bulk of the picture, you get something akin to the theme that often runs through werewolf movies: the potential to do harm to those you are closest to, the ones that you love, due to some beastly quality within you. The final reveal of this film has not one thing to do with that theme. It seems like an afterthought shoehorned into the film due to a need to explain the reason why the virus was created in the first place. Did we really need that? A little mystery to go along with the horror isn’t a bad thing.