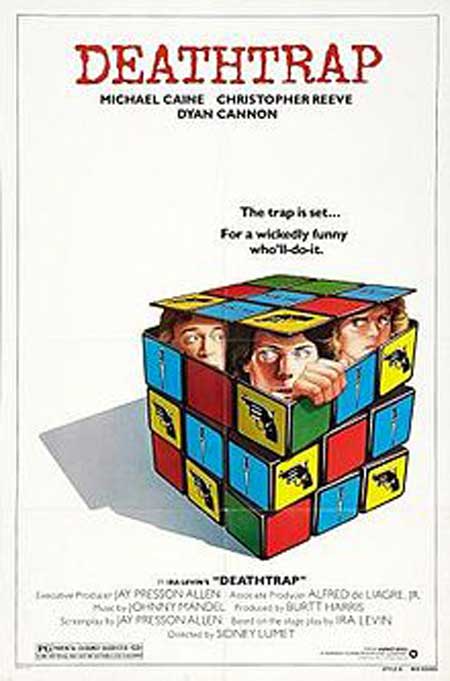 A playwright that is desperate to come up with his next big hit decides to kill one of his students and steal his idea for a play that he wrote.

I saw Deathtrap one Sunday afternoon on cable when I was a kid and just really couldn’t get into it. It didn’t have enough gory death scenes in it for my tastes at the time and I thought that it was more than just a little boring. To be honest my little ten-year-old brain just didn’t really get it at the time and even though my mom really enjoyed it I was less than impressed with it and spent most of the time that we were watching it focusing on playing with my Masters of the Universe action figures. I watched it again for the first time since then this weekend and while I am not really in a hurry to ever watch it again I thought it was a little better this time around.  While it does have its moments from time to time it still has a number of flaws and in the end while I can’t say that I hated it I’m not exactly sure that I liked it that much either. 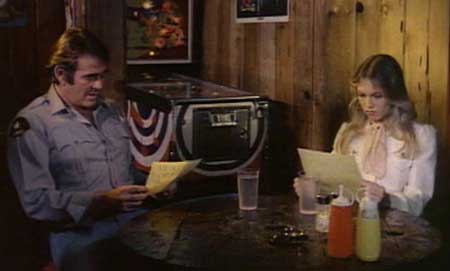 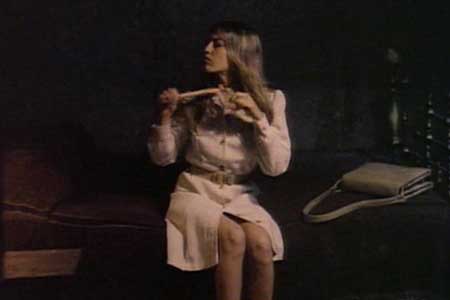 One of the biggest problems that I had with Deathtrap was the fact that it is so long and there are definitely problems with its pacing. It clocks in at almost two hours and it tends to drag on and on more than once. I don’t really have a problem with longer movies as long as something interesting is going on to hold my attention but that just really wasn’t the case with this movie for the most part. It is more of a character-driven piece and there isn’t a whole lot of action to be found here which makes it seem more than a little boring at times. I really think that some of the scenes could have been trimmed because there is a lot of down time in the movie and as a result I found myself wanting to fast forward or skip ahead to the next scene on several occasions as I was watching it. As much as I hate to say it there is a lot of pretty uninteresting things going on during the film and there were a handful of times that I just desperately wanted something to happen. I realize it is supposed to be a slow burn of a film and everything but if you ask me it burns a little too slow and I had trouble giving it my full attention at times.  If you’re looking for a fast-paced movie that has non-stop action I really don’t think that Deathtrap is for you because it moves along at a snail’s pace far too often. 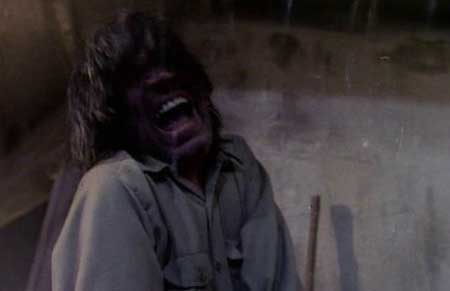 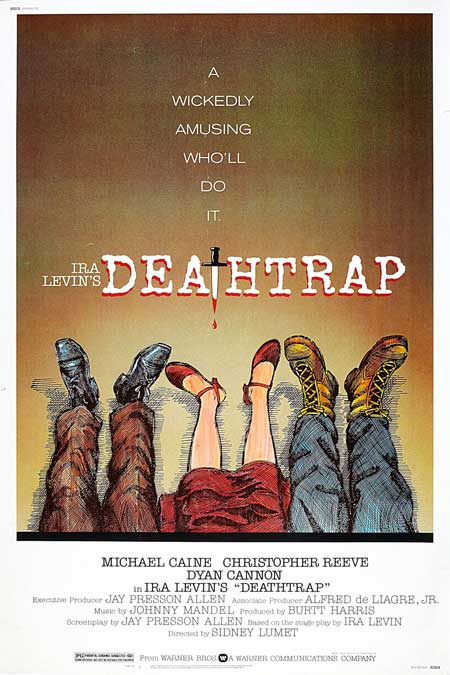 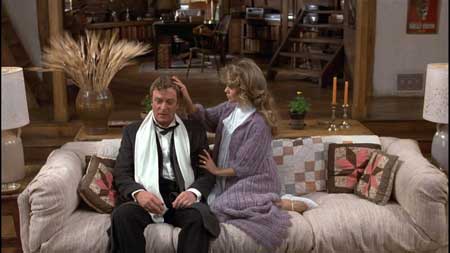 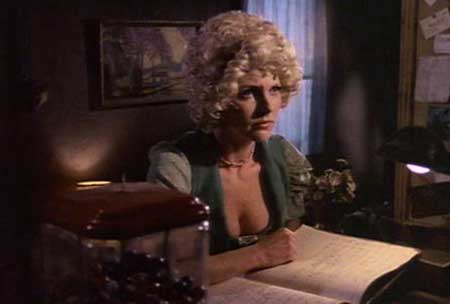 I also thought that there were almost too many twists and turns in it. Don’t get me wrong, I love a good mystery that throws you a curveball several times and keeps you guessing, but I think that they went a little overboard with it in this movie. It has more twists and turns than a curvy road and some of them just don’t really work in my opinion. I am a little torn on the big twist at the end and while part of me liked it because it is original and creative the other part of me just wasn’t really feeling it as I thought that it came off as a little forced. It was almost as if screenwriter Jay Presson Allen (and Ira Levin, who wrote the original play the movie is based on) were trying a little too hard to take viewers by surprise. I mean it works on one level if you don’t think too hard about it but at the same time something about it just didn’t set right with me for some reason that I can’t really explain. I have a feeling that while some viewers may love the ending others will hate it and I am sure that there have been a lot of debates about it between people who have seen it. I don’t want to give anything away because it is a pretty big deal and a major surprise (I didn’t see it coming) but I am just not sure that it was the best way to end things. 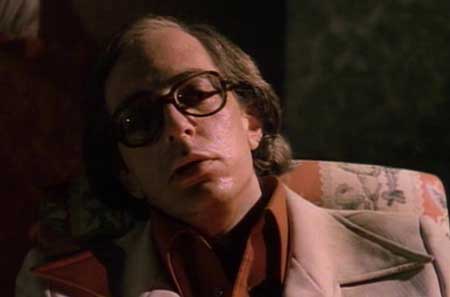 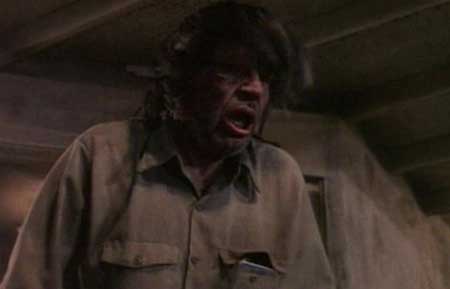 On the other hand I thought that the cast was phenomenal. Michael Caine turns in a flawless performance as the main character Sidney and I think that he was one of the best things about the entire movie. Even though he isn’t the nicest or most moral person in the world there was something about the character that I really liked and I thought that Caine just owned the role. The same could be said for the always awesome Christopher Reeve as Sidney’s student Clifford. I have always been a big fan of Reeve’s work and he really delivers this time around. I think that this was one of his best performances ever and he just does a fabulous job of bringing the character to life. Irene Worth does an equally impressive job as the psychic Helga and I was blown away by her performance (especially toward the end). You won’t find a bad performance from anyone here and if you ask me the highlight of the film was the cast as they all did an exceptional job of creating realistic characters that you actually care about. 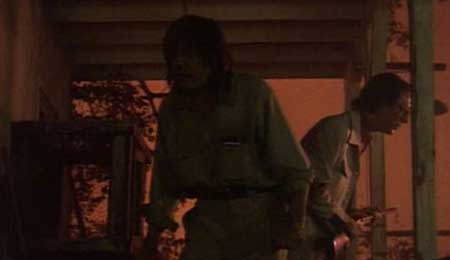 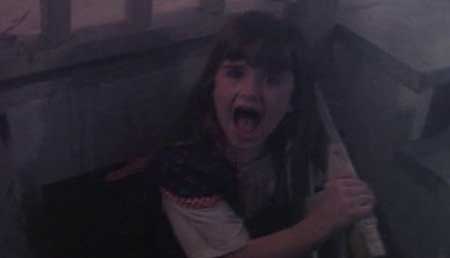 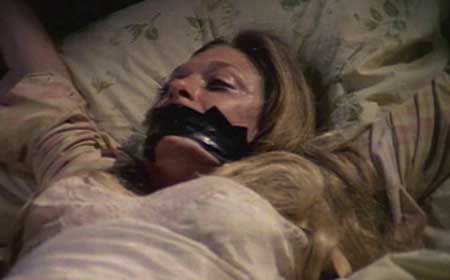 Deathtrap isn’t a bad movie so to speak but I just don’t think that I was the right audience for it. It is more of a suspense/thriller/mystery film than a horror movie and while I do enjoy these types of movies every once in a while I did have a bit of trouble getting into this one (I think it was mainly due to the fact that it is so long and not a whole lot happens for most of its run time). If you are into suspense films with a lot of twists and turns it might be right up your alley but if you are more like me and prefer all out horror films instead you may want to steer clear of it as chances are you won’t really enjoy it. Check it out if it sounds like something that you may be into as you may love it if this type of movie is your cup of tea.