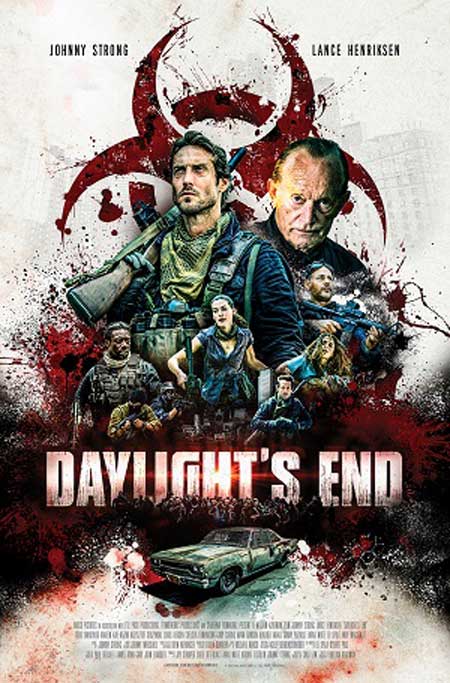 The world has been ravaged by a horrible disease, and civilization has collapsed leaving only small pockets of innocent survivors, roving gangs, and hard-edged, crusty loners to determine who will rebuild the world – if they even can.

Daylight’s End is a post-apocalyptic film set sometime in the not too distant future, probably sometime after the day after tomorrow, but before the end of days, whenever that is. Johnny Strong (I kid you not) stars as Thomas Rourke, the burned-out and excruciatingly dead-pan male lead; the always enjoyable Lance Henriksen stars as the blandly named Frank Hill, leader of a group of desperate survivors; and Chelsea Edmundson appears as the gratuitous, yet requisite, super-competent, super-supple female lead with the requisite male name, Sam Sheridan. In the respectable tradition of sci-fi action films passing themselves off as horror films in order to grab as wide an audience as possible (I submit Alien, The Thing, and Event Horizon to name a few), Daylight’s End succeeds admirably, although on lesser ground.

After all these years as money-printing machines in Hollywood, the collapse of civilization and creature-creating viral outbreaks as movie scenarios are such successful and staple tropes that an explanation as to their origins in any given film is entirely optional now. And so with Daylight’s End; a cursory visual run-through is given as a wordless montage accompanying the opening credits roll: transparent CGI viruses squirm over red-rimmed maps of the United States; footage of riots breaking out is superimposed over other footage of other riots in other cities breaking out; buildings are in shambles; bonfires are raging; and it’s made abundantly clear that No Lives Matter. Beyond this quick funhouse mélange, there’s no other explanation given, and honestly, none is really needed. It’s obvious from the opening scene that this is going to be an unpretentious romp through your basic monster-whacking apocalypse movie. ‘Nuff said.

The standout of the film has to be the locations and Winona Yu’s set decoration. Shot in the sunbaked wilds of Dallas Texas, the film’s locations do a remarkable job of capturing that grunged-out urban feel commonly found in more depreciated and pulverizing environments like New York City or Detroit, the kind of cities which typically come to mind when the theme of post-apocalyptic chaos rears its putrid, decomposing head. Director William Kaufman has expertly narrowed his shots so as to highlight the few background buildings which would be suitable for filming, giving the whole the claustrophobic feel required for making the cast seem truly marooned in an island of collapse and certain death. Interiors look properly decayed and senescent, with peeling wallpaper, rusted metal, and piled trash filling haunted hallways.

Kelly Riemenschneider’s cinematography and color correction are noteworthy, as well; the brightly lit exteriors could have easily been blown out and brittle, but he managed to keep them creamy and smooth without losing the desolate, dog days feel required (especially in Dallas) for a scalding end of the world scenario. With the interiors, he was able to elevate the heat and tension to a fever pitch simply by tweaking the green tones up ever so slightly and allowing the perpetual sweat oozing from the actors to speak for itself in the queasy light; in those scenes, he shrewdly saturated the color just enough to bring out the extreme stickiness, reinforcing the anxiety expected from people trapped in an enclosed space and who are trying desperately to fight off creatures bent on breaking in and consuming them. 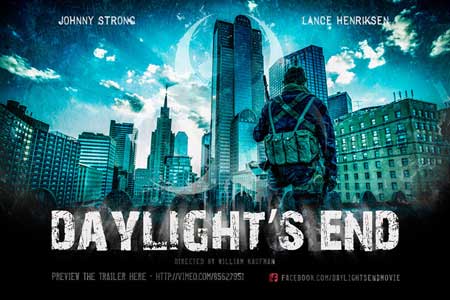 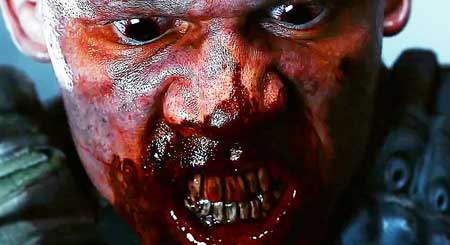 Although Daylight’s End offers up some quality technical expertise, it is by no means a perfect film. Surprisingly, the weakest link isn’t the script (though it is pretty bare, as it is with most films of this kind), but with the lead, Johnny Strong, who’s performance is rather light and, at times, a bit hesitant; he spends most of his time avoiding eye contact which reduces his potency as the End Time’s resident Tough Guy. The film follows in a long line of similar films, better than some (Exterminators of the Year 3000, The New Barbarians) and worse than others (Escape from New York, Dawn of the Dead), but it does manage to hold its own somewhere between the two extremes. In the end, though, it can be best summed up as The Road Warrior meets The Omega Man. Not bad company after all.