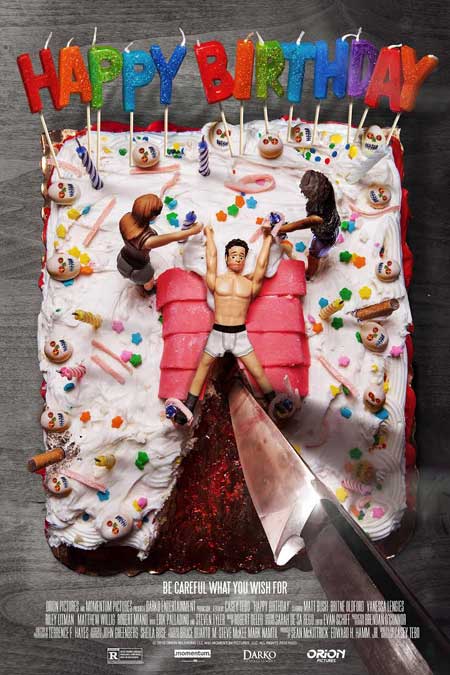 To celebrate his birthday (and to get over the fact that his girlfriend cheated on him) Brady heads to Mexico with his friend Tommy for a fun-filled adventure. Unfortunately after hooking up with a couple of women-who aren’t exactly what they seem to be-Brady’s birthday becomes a living nightmare that he may not survive.

I went into Happy Birthday with pretty low expectations and really didn’t think that I would like it. I thought that it sounded like some sort of weird combination of The Hangover and Hostel and was pretty sure that it just wasn’t going to be for me. However-much to my surprise-I found myself being really into it after just  the first few minutes and by the time the credits started to roll I realized that I really liked it. I thought that it was very well-written, the acting was top-notch, and it had a cool little twist toward the end that I never in a millions years would have seen coming. Throw in the fact that Steven Tyler of Aerosmith makes an appearance as a drug dealer and you have a great little movie that is entertaining as hell as well as just a lot of fun in general.

I liked the fact that there is almost always something going on during the film. Things get going fairly quickly and doesn’t let up until the end credits start to roll. Since I have a super short attention span I appreciated that there wasn’t a whole lot of down time thanks to the movie’s fast pace. I was entertained the while time I was watching it and not once was I bored or felt the need to skip ahead to the next scene. Don’t get me wrong, it isn’t exactly an action-packed flick full of explosions, gun battles, or high speed car chases but it is never dull and is exciting in its own way. If you are looking for a movie that will hold your full attention from beginning to end then Happy Birthday is definitely for you.

I also dug the characters as well. I really liked the main character Brady a lot and could totally relate to him in many ways and I think a lot of other viewers will too as he is just your average, everyday guy that finds himself in a shitty situation that he has no control over. He is a very likeable character and I thought that Matt Bush did a kick ass job of bringing him to life and making him not only relatable, but realistic as well. I liked his best friend Tommy (Riley Litman) as well and even though he is a tad annoying at times and some viewers may not care for him there was something about him that I just really dug. Katie and Lucia-who are the film’s antagonists-were surprisingly likeable as well and I thought that they were both quite awesome (plus Katie is cute as a button and I loved  the fact that even though she was one of the people responsible for kidnapping Brady that she was sweet on him at the same time).

I thought that they had great chemistry together and that they were just great characters in general (plus Vanessa Lengies and Britne Oldford were both excellent in the roles). Of course Steven Tyler’s character rocks and he has some of the best lines of the movie if you ask me (I loved the bit where he discusses the comic version of Nick Fury as opposed to his movie counterpart). He provides some nice light comedy relief and Tyler’s performance is quite impressive. It is obvious that he had fun with the role and as such his character is just all around cool (I just wish he’d gotten a little more screen time). All in all I thought that Happy Birthday had some had some pretty awesome characters and there really wasn’t a single one that I had a problem with.

I have to admit that I didn’t see the big twist coming. I thought that it was pretty cool and that it worked. It is a lot like the big twist that occurs in another movie that came out several years ago and dug the fact that one of the characters actually mentions it at one point after it is revealed. There is actually another surprise at the end and I thought that it worked as well even though I was pretty sure that it was going to happen. I don’t want to say anything more because I don’t want to ruin it for anyone so let’s just say that the twist is pretty major and changes the entire direction of the movie after it takes place.

I really liked Happy Birthday and thought that it was a lot better than I initially expected it to be. It has a lot going for it and I enjoyed watching it for a number of reasons. While I really wouldn’t call it a horror film (and am a little hesitant to even call it a suspense/thriller) I still thought that it was a great film and have to say that it was one of the best ones that I’ve seen this year. Writer/director Casey Tebo really delivers here and I can’t wait to see what he has in store for us next. Check it out when you get the chance as you won’t regret it. Highly recommended!