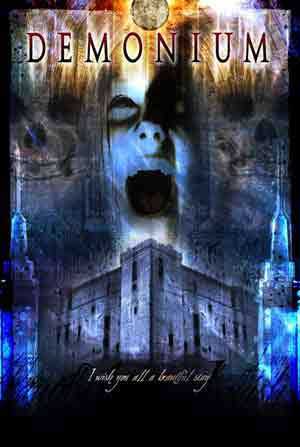 An elderly man is murdered in his lavish Italian castle. When his friends and family arrive there for the reading of his will, the murderer has plans to continue his gory killing spree.

German low-budget horror maestro Andreas Schnaas once again serves up a bloody offering in Demonium. There is blood aplenty as bodies are dispatched in all kinds of over the top ways. Gorehounds will be kept satisfied but as far as the actual movie is concerned, the verdict is mixed.

The film starts off with a blind woman being stalked in her own apartment by a grotesque person in an oversized fur coat. When her husband receives a mysterious call at work and realizes his wife is in trouble, he rushes home. When he gets there, we see that his wife is tied to the bed and hooked up to a booby trap set to kill her. This is the only sequence in the movie that contains any amount of suspense, and in that department it is well done.

After this scene we cut to a year earlier when Arnold, the owner of a large castle, is brutally murdered. This killing sets the tone for the rest of the movie, which is blood, blood and more blood. Not to mention crazy humor as our victim tosses one of his severed limbs out the window in a desperate attempt to get help. How you react to this particular killing will determine if you will enjoy the rest of the movie, cuz you are going to get more of the same.

Well it turns out Arnold, although an eccentric and amateur mad scientist, is quite wealthy, and his family and friends are called to the castle to hear the reading of the will. The executor of the will is Rasmus Bently, but his motives go a bit more beyond that. Besides the wealth, Arnold also discovered a formula that will basically cure every disease and make its inventor rich beyond imagination. Problem is he never quite mastered what dose was best. You see, this little potion will kill you in the most horrific way if taken in the wrong amount.

It isn’t long after the will is read and a video of Arnold, instructing everyone that they must stay in the castle for three nights or they’re out of the will, is played, that the mayhem ensues as one by one the inheritors are killed off in the most gruesome fashion.

The movie makes no secret of who is behind all this brutality and I think it hurts the film just a tad. Not that I mind knowing and seeing who is doing the killings, but in this case it could have added just a little bit more if for say, half of the film, we were kept in the dark.

One nice thing about a castle setting is that there are a large variety of weapons just hanging around the walls waiting to be used if you don’t feel you need that particular limb of yours anymore. And boy do they get used. Oh, and another thing, if you’re a guest at this little get together, for goodness sakes don’t drink anything!

Andreas uses lots of medium to wide shots which not only keeps the action out in front of you, but helps when it comes to capturing all that arterial spray. The plot is about as basic as you can get and the same goes for the acting. Although to be fair you do have mostly Italian actors doing their best to speak English. The strongest character is Victor the Russian played by vet Joe Zaso. He has fun with the role of a playboy artist and has the best lines in the film.

All in all I would say see it once if you one, like German horror films or two, just like to see bodies being hacked, ripped, sawed, exploded and generally torn apart. This film doesn’t offer really anything new or different, but that’s never stopped us horror fans before.