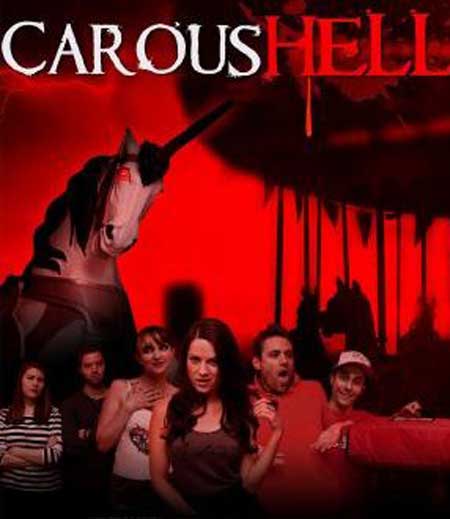 A sentient carousel unicorn gets pushed too far and goes on a murderous rampage.

Even as horror comedies go, CarousHELL is one of those movies that has to be seen to be believed. It is every bit as bizarre as its premise promises: The film follows Duke, an inexplicably sentient unicorn at a amusement park carousel, who goes on a murderous rampage after suffering years of abuse from rowdy brats with runny noses and sticky hands. Duke breaks loose from his carousel confines, hellbent on offing the last kid who gave him grief and leaving a trail of dead bodies in his wake. He stalks the little boy, Larry, and his teenage sister Laurel to a house party, where he finishes off the guests one by one.

Seasoned voice actor Steve Rimpici is the perfect choice to portray the disgruntled Duke, lending personality and an obscene charm to what is essentially an inanimate object. Rimpici’s gruff lilt does the film’s off-kilter humor justice, but I wish I could say the same for some of the cast.

CarousHELL has a snappy, self-aware script that’s packed with puns: It pokes fun at well-worn horror tropes, millenial obsession with social media, and even the My Little Pony fandom. But a funny line is only as good as whoever delivers it–and Joe the pizza delivery guy (played by director Steve Rudzinski himself) is the only one of the characters with the comedic inflections and timing to really land jokes. One could argue that Rudzinski had an advantage as one of the film’s writers, but we’ve all seen writers try to be actors before and vice versa, and there’s not necessarily a transitive property between these skills.

The production has creativity–and shock value–in spades, but its not without a few rough edges. The outdoor shots are crisp and well-executed, but a lot of indoor shots are where the budget starts to show: There are one or two of scenes in which the camera shakes or the sound quality wavers. Sometimes the actors are too close to the mic, so much so that their screams sound like pitchy shrieks and you have to turn the volume down.

But if there’s anything a slasher flick shouldn’t skimp on, it’s the bloodshed–and in this, CarousHELL does not disappoint. There is an impressive amount of detail that went into the guts and gore, of which there is a lot. Unapologetically campy and ridiculous, CarousHELL’s body count includes death by ninja stars, machetes, and even lawn flamingos. The practical effects behind the onscreen kills are so well done that the movie earns every blood-soaked closeup.

Few forays into the hack-and-slash game would attempt to pull off a plot this nutty, simply because it’s so ambitious. CarousHELL fully embraces, if not revels in its absurdity–from Cowboy Cool, an amusement park mascot and the movie’s self-styled hero, down to a post-credits scene reminiscent of Dawn of the Dead and Bride of Chucky.

It takes its cues from the slasher genre, but barely–and just enough to turn those conventions on their head. Even its ending, while gleefully satisfying, is completely out of left field. It’d be damn near impossible to describe this movie in conversation, let alone its insane unicorn sex scene that I’m certain will earn it a cult following in years to come. Rudzinski has been known for the offbeat flavor of his films, but CarousHELL turns it up to 11. It lovingly lampoons the very films it pays tribute to, clearly determined to be its own thing, and in doing so, comes through as a hilarious and off-the-rails ride.