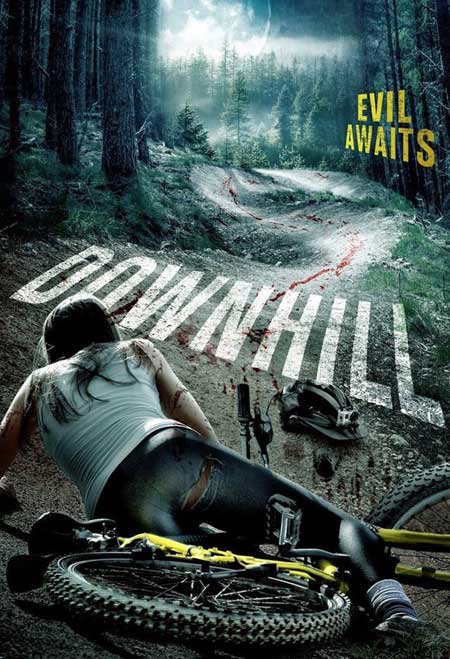 Taking what seems like a permanent break from professional mountain bike racing after his friend dies, Joe is lured back into the game when Stephanie, Joe’s girlfriend, and Pablo, a friend in the promotions business, strong-arm him into competing in a biking event in Chile. But on arrival, things almost immediately go downhill for Joe and Stephanie, locking them into a deadly race with only terror as its finish line.

Using mountain bike racing for basic plot structure in a horror film is unique, that’s true. And, granted, originality should be encouraged when it comes to a genre that’s sorely lacking in it, but unfortunately in this film, it just doesn’t work. The use of mountain bike racing as a backdrop seems forced and far too airy; early on, when the concept is laid out through subjective shots of Joe (Bryce Draper) racing, it comes off more as a cheap BMXing video than a set up for character enhancement. It really does seem like a gratuitous and shallow move precisely because those early scenes were shot like depreciated extreme sports videos, thoroughly lacking any kind of substance; they seem completely out of place, leaving the whole biking conceit unnecessary and silly.

This is made all the more obvious when looking back at the opening scenes with the dippy banter between Joe, Charlie (Eyal Meyer), and Stephanie (Natalie Burn) just before Charlie’s desultory death. It’s those kinds of artificial attempts at character development that cause the experienced viewer to roll his eyes and lose the will to live. After Charlie’s death, the old you’ve-got-to-get-over-it cliché rears its tired head with the appearance of contrived tension between pushy promoter friend, Pablo (Ariel Levy), and Joe, followed up with a heaping helping of  the exceptionally creaky you-can’t-keep-hiding-from-the-world tirade from Stephanie, who desperately wants him to take part in Pablo’s biking event. Once the browbeating wears Joe down and the couple arrives in Chile, however, the film does pick up slightly and begins to gain its footing, although not by much. The xenophobia trope, which is the whole basis of the film, takes its bow when Joe and Stephanie encounter, in a not so subtle introduction, what will obviously turn out to be the very bad local men who will be causing them no end of problems in the second and third acts.

Scripters, Barry Keating and Patricio Valladares, offer up very little in the way of believable characters or interesting plot concepts. Their shallow depiction of the dramatis personae seems more derivative of their extensive comic book and video game work than of any thoughtful examination of theme, motivation or serious plot construction. The script was obviously written exclusively from the inside, by fanboy geeks who’ve primarily experienced very little outside of the uncritical, infantilized genre world, where ridiculous character behavior is the norm, cool scenes of superfluous action are considered sophisticated tools of narrative architecture, and random, uninspired imagery, which can only be connected together by the greatest of efforts, are treated as acceptable modes of storytelling.

The scene, which is never led up to nor followed up on, of Joe and Magdalena (Pablo’s girlfriend, played by Ignacia Allamand) sneaking some raunchy long-time-no-see sex outside behind a cabin at night is a perfect example of the unnecessary flotsam filling the script; it starts and ends suddenly and applies to nothing else in the movie, making it feel out of place and separate from everything else in the film, and is so brief and disconnected as to do nothing in the way of its purpose, which is to add a little negativity to Joe’s character. It’s just not convincing.

The bad script and direction don’t do much for the acting, either, which is mostly atrocious. In the very few scenes where it could have been saved by tighter, vigorous editing, it simply doesn’t happen. Either Cristian Toledo, as editor, didn’t have the vision for it or he was overruled by Patricio, who also co-edited the film. Patricio allows certain scenes to go on for far too long, exaggerating the already overwrought spluttering that’s being passed off as terror, fear or anguish, depending on the scene. The one so-so actor in the lot is Bryce Draper, but the occasionally tolerable moments he does have are made irrelevant by the many embarrassing moments that dominate.

Get into the pass lane, and don’t let this one drag you downhill with it.