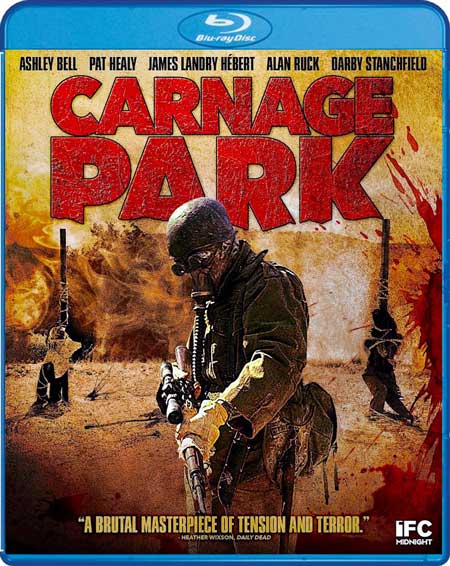 Vivian Fontaine is having a bad day. Her father is dying. The heartless owner of the land her family is farming is attempting to evict them. The overbearing manager of the Mackin County Bank has turned down the loan her family needed so they could buy the farm and stay on it. And she was just kidnapped by two low-rent criminals, Scorpion Joe and Lenny, who robbed the bank. Little does Vivian know, everything up to this point has been a piece of cake compared to what’s coming.

Ashley Bell turns in a solid, first-rate performance as Vivian in this throwback horror film. She makes her entrance after the first few opening scenes which show a barren, mountainous California landscape in 1978, the Carnage Park of the title, that definitely isn’t on anyone’s list of travel destinations, unless you happen to be an eccentric loner with a monstrously creepy chip on your shoulder; it’s a desolate void, symbolizing the inner landscape of Wyatt Moss (Pat Healy), a deeply troubled vet back from Vietnam who’s ready to hand out his own brand of isolationist justice (as observed in the opener) when people trespass on his land, and who will play a major part in the horrors to come.

Until then, Vivian has to deal with the likes of Scorpion Joe (James Landry Hébert), an overconfident, under-intelligent, highly-wired petty criminal who just robbed the Mackin County Bank with his less than confident partner in crime, Lenny (Michael Villar). After making a quick, but sloppy, getaway, Scorpion Joe tries to avoid the police who are in hot pursuit by pulling off the main road and heading into restricted private property; once safely hidden by scrub and mesquite, Joe jumps out of the vehicle and forces a terrified Vivian out of the trunk of the car at gunpoint. 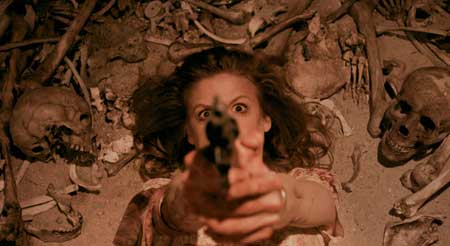 Uncertain and in fear for her life, she makes a desperate move, slugging Joe with a nasty right hook, then takes off running, only to be stopped at gunpoint again and brought back to reluctantly help him dispose of some cumbersome dead weight. Once that dirty work is out of the way, they return to the open road, but before they can get very far into Joe’s planned Mexican “vacation”, his tire is shot out, sending them into a dead skid.  Being the unstoppable Scorpion Joe, a sobriquet he supposedly earned in prison because he was such an unpredictable and lethal killer, he stands tall at the side of the car, waving his gun around and foolishly challenging the unseen sniper who shot out his tire. Unbeknownst to our dimwitted Joe, the person he’s challenging is far deadlier than any scorpion.

At its most obvious, Carnage Park is a modern take on Pichel and Schoedsack’s The Most Dangerous Game; but if you look a little closer and keep in mind that movies have a tartan pedigree, then you’ll notice that writer/director Mickey Keating has also produced a slightly softer, hipped-up love letter to the gritty slasher films and disgruntled-vet-back-from-‘Nam movies so common in the 1970’s, as well as to Peckinpah’s unflinchingly ferocious The Wild Bunch and Robert Aldrich’s nearly forgotten classic, Ulzana’s Raid. With our psycho killer eventually taking center stage, the film affectionately calls up bits and pieces of My Bloody Valentine, The Deadly Tower, and The Prowler with a little pinch of spice from Texas Chainsaw Massacre and The Hills Have Eyes nicely tossed in for flavor. “Mackin County” even seems to be a slight nod to the 1974 hillbilly revenge classic, Macon County Line. But not wanting to be mistaken as a purely nostalgia filmmaker, early on in the movie, Mickey tips his hat to the very overrated, retro-modern-cool Quentin Tarantino with a few flashy slow-motion scenes, jazzy rearrangement of story structure, Japanese rockabilly music for the ironic hipster crowd, and the aforementioned Tarantinoesque bank robbery, which does a solid job of expressing the White Trash Noir feel the director was looking for. Mickey Keating knows his grindhouse as well as the overall culture surrounding cinema; for all those youngins out there who don’t know their film history: open your eyes, son, this is your heritage Mickey’s lovingly referencing.

The casting by Lindsey Weissmueller is impeccable; Pat Healy delivers a remarkable performance as the overtly psychotic Wyatt Moss protecting his land from anything on two legs; it’s very likely the best performance in the whole film, which would make it one of the best performances in any horror film in quite some time. As stated before, Ashley Bell’s Vivian seems truly terrified, even in the more absurd moments when a little comedy is placed front and center; her portrayal is flawless. James Hébert’s Scorpion Joe hits the perfect tone as the catchpenny loser, never missing the opportunity to be both slimy and stupid.

Michael Villar, as Joe’s cohort, Lenny, plays the ideal witless follower, his character displaying humanity, inadvertent humor, and pathos all at the same time. Bob Bancroft as bank manager Mr. Oates is wonderfully unsympathetic and disdainful of Vivian’s needs; the viewer simply wants to smack him across the face when he tells a desperate Vivian she could always try making money at the local burlesque theater. And Alan Ruck as Sherriff Moss, Wyatt’s brother, is aces when it comes to turning from rock solid Andy Griffith-styled Sherriff one minute to hesitant sibling talking to himself the next. 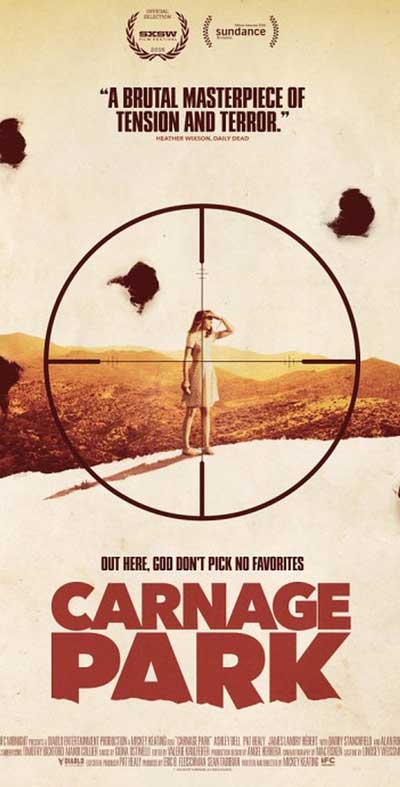 For those in the know, or for those willing to invest in a little research time, Carnage Park offers up a buffet of sophisticated film references which only enhance an already well-crafted and highly accomplished movie. It’s a must for anyone interested in intelligently made horror films or for anyone who misses the good old days of 1970’s genre cinema.

Carnage Park is now available on bluray per Shout Factory