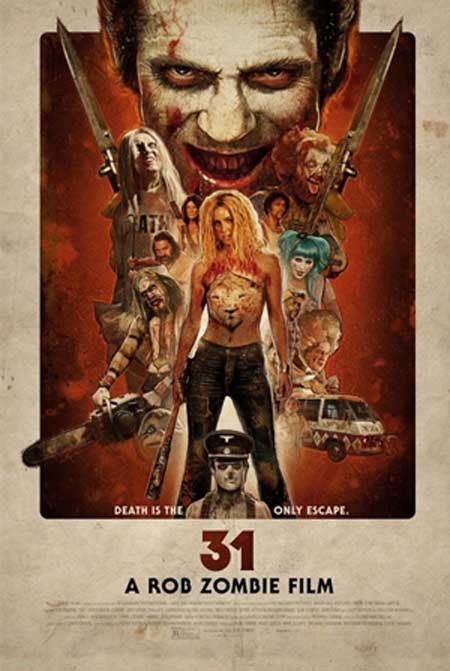 A group of traveling sideshow carnies are kidnapped by a group of killer clowns who want to force them to play a sadistic game.

Rob Zombie is back with a vengeance. Disclaimer: I’m actually a big fan of Zombie, both as a performer and as a director. I loved House of 1000 Corpses, The Devil’s Rejects, Lords of Salem, and even his Halloween movies (sorry, they were great). Needless to say, I’ve been excited about this one for a while, and  it certainly seemed like a project that would be right up his alley. With a pretty varied group of actors, an interesting plot, and some excellent ultra-violence, he knocked this one out of the park. 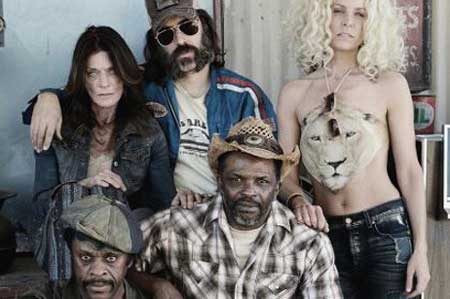 A group of carnival workers, traveling across the country to set up their sideshows, stop for gas in a rural part of the country and are accosted and eventually kidnapped by a group of evil clowns. They are taken to a giant warehouse/factory, where a group of Victorian-era-dressed clowns led by Father Murder (Malcolm McDowell) tell them that they are going to be playing a game, wherein they must survive for 12 hours against a group of murderous clowns with names like Sick-Head, Psycho-Head, and the ever-awesome Doom-Head. This starts a night of murder and mayhem, where our group of carnies are tortured, murdered, and hunted through an industrial nightmare and beyond.

One of the things that I feel is a weakness for most of Zombie’s movies is the dialogue, as some of his scripts are populated by things that regular people just don’t say in regular conversation. While this movie did have a little bit of that, it was much better in that respect, managing to be both believable and interesting for the most part.

The dialogue was good, and most of it contributed to the movie, rather than being something you almost have to overlook to enjoy the rest of the film. The acting, which also can sometimes be spotty and over the top in his movies… well, that was exactly the same, but it fit very well into this film. The hammy, scene-chewing murder clowns fit into the “playfully murderous” game very well, and Sherry Moon Zombie was her normally wonderful self. Richard Brake was absolutely outstanding as the nihilistic Doom-Head, giving 31 the strongest opening scene from a Zombie-helmed movie yet, and he totally stole the show. His character is downright scary, certainly someone you wouldn’t want to run into in a dark alley (or a light one, for that matter.) 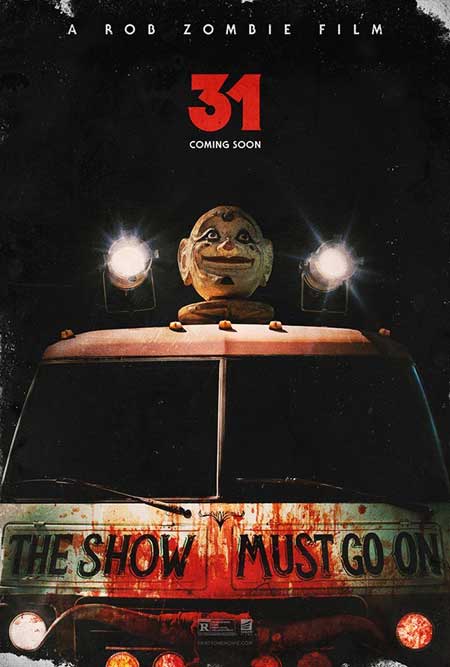 It was rumored that 31 had to be sent to the MPAA three times to get a rating that wasn’t NC-17, and I absolutely get that having seen the movie, as its definitely his bloodiest yet. The violence is immediate and all-encompassing. One of the things that I often find myself thinking when watching a gory horror movie is “Man, I wish they had used (insert blunt/sharp object here) instead of (boring, normal object they actually used). Couldn’t they have made it better by showing (brutal murder/chainsaw kill/butcher knife hack) instead of (off-camera blood spatter/character screaming and not being shown again/laughing villain as he cuts through the characters)? 31 was there for every gruesome kill, every sliced artery, and, while it avoided being overtly disgusting and full on Hostel-style torture p*rn, it was certainly unflinching and willing to show the goods. To me, the ability to be both tasteful (at least as much as you can be in a film where evil clowns brutally murder innocent people) and incredibly intense helps this film to rise above a lot of the other films Zombie has made.

The showing I attended was a screening, so we actually got to see a couple of Rob’s new music videos beforehand (which were, of course, awesome), as well as a Q&A afterwards. One of the statements Rob made during the Q&A fit this movie better than anything else I could say: When you think of a movie that Rob Zombie would make, this would be it. 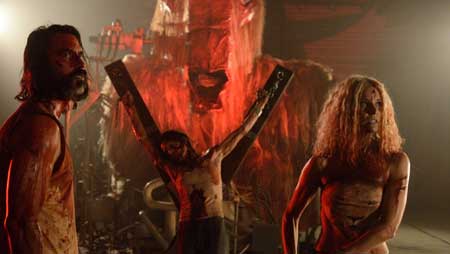 While I’m a fan of his other movies, this one fits Zombie to a T. Another thing he said in his Q&A that also holds true is that Rob Zombie movies are not for everyone. There are some people who aren’t going to like them, and there are some people who aren’t going to be able to stomach them. Such is the nature of writing and directing horror films. And that’s ok. If it finds an audience, it doesn’t matter as much that it hasn’t found every audience. This is certainly a film that won’t be loved by some, and won’t be tolerable by others. But for Rob Zombie fans, it really doesn’t get any better than this.