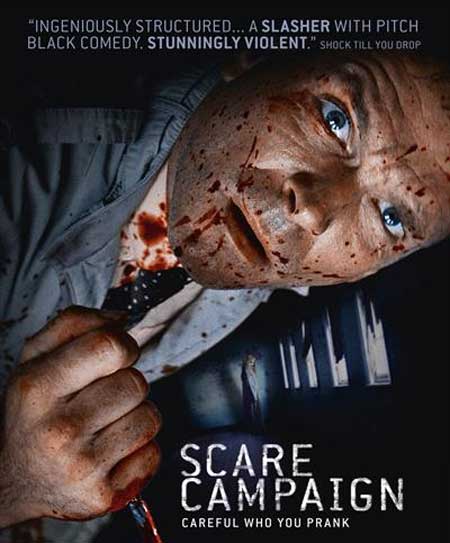 Popular prank TV show, Scare Campaign, has been entertaining audiences for the last 5 years with its mix of old school scares and hidden camera fun. But as we enter a new age of online TV the producers find themselves up against a new hard edged web series which makes their show look decidedly quaint. It’s time to up the ante, but will the team go too far this time, and are they about to prank the wrong guy? (source: IMDB)

When I found out Scare Campaign was an Australian film and written by the same duo (brothers, Cam and Colin Cairnes) who penned and directed the rather amusing comedy/horror 1000 Bloody Acres, I was pretty interested in seeing this more straightforward attempt at the horror genre.

As the Synopsis pretty well sums up, we have “Scare Campaign”, a TV series lagging in ratings and dropping amidst the online era. A similar show called “Scare Tactics”, which actually kills its victims with a slew of interesting weapons directly attached to cameras, is drawing in the viewers and membership, and the producers of “Scare Campaign” want some of that membership pie. 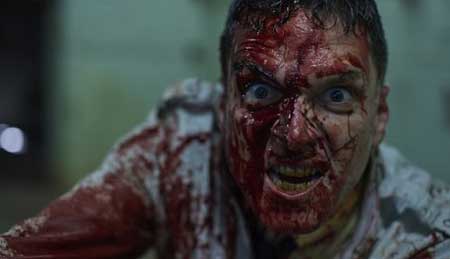 So, given only their final episode for the series to pull off a miracle or face being axed, the small crew conjure up a “campaign” involving an old mental institution and former “client” of said institution. Needless to say, things don’t go as scripted as the director would hope.

I don’t want to go too much more than that with fears of spoiling the film, however, having said this, the film pretty much spoils itself within the first act, giving their big reveal/twist away rather blatantly. This resulted in me yelling “Ahhh, derrr, Fred!” at the screen when they attempted to shock and awe me with the “twist” in the third act. A disappointing aspect to an otherwise rather solid film.

Regardless of the above, Scare Campaign was a decent attempt at making a more mainstream horror film, something Australian cinema doesn’t do often. I’m not saying all our films are crap, but Australian cinema tends to veer toward two extremes, either safe (and boring) dramas with the same 5 actors, or extreme Ozploitation genre fare, with only a few films straddling the middle ground. Scare Campaign was a refreshing change, even though it’s not the greatest film out there.

Acting was a mixed bag, with the scale ranging from very good (Meegan Warner as Emma) to flat as a pancake, and unfortunately one of the main characters was the pancake. Ian Meadows’ portrayal of the director, Marcus was rather lacklustre and really took me out of certain scenes. He had trouble conveying fear and urgency so when scenes commanding these emotions unfolded, they just couldn’t draw me in as the character on screen didn’t seem drawn in himself. It’s a shame. Rohan, the not-quite-right “victim” of the episode, was played fantastically creepy by Josh Quong Tart, and I must give kudos for his portrayal. Easily the best of the lot in the film. He would make the perfect Hannibal Lecter in any Silence of the Lambs reboot.

On to the effects, which were great. The practical gore used was plentiful and well done. Though not as bloody as I would have hoped (the half head severing scene really needed more blood), I was impressed overall. Cinematography was solid with nothing too flamboyant attempted. I appreciated the lighting too as no scene was overly dark so everything was easily viewable.

Story-wise, it was solid enough, though I felt it was weak from the midpoint onwards. A few plot conveniences also got my goat and really drew me out of the film. If a mobile (cell) phone isn’t working one scene, and in the open, why the hell would it suddenly work indoors? A reason is needed, otherwise it comes off as trite and convenient. The ending was a little lack lustre for me, with our protagonist(s) not really doing much to get themselves out of the situation, rather than being handed the “out”. Not exactly Deus Ex Machina, but I would have appreciated more of a struggle and inventive finale. It really felt like the writers wrote their protagonists into a corner so well they didn’t know how to get them out and unfortunately decided on an easy, and rather uneventful, option. As mentioned before, one of the twists was telegraphed far too early, but another wasn’t and was a rather entertaining one at that. It’s a shame the bigger twist wasn’t handled with more care. 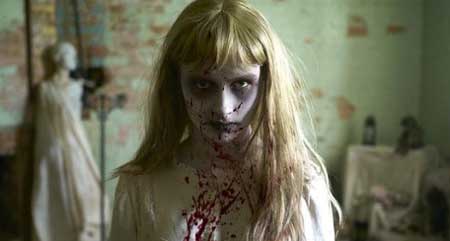 I am really looking forward to the Cairnes’ brothers next effort, and applaud them for attempting films which breakout of the norm within Australian cinema.

Should you watch it? If you are a fan of slasher horror, then give Scare Campaign a go, you will find entertainment value within its runtime. If you are Australian, then support the Australian horror scene any way you can. Shiva knows we need more mainstream horror made Down Under.

PS: For those who Haven’t seen 1000 Bloody Acres, give it a go, it’s like Tucker and Dale vs Evil’s Australian cousin! Not the same level of course, but still, a bloody decent effort.

3 out of 5 chainsaw cameras