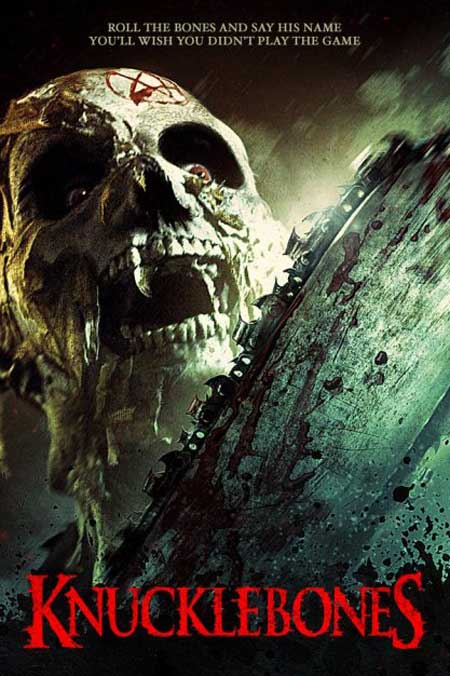 Straight out of the meat grinding distribution arms of Midnight Releasing/Brain Damage comes this cool lil ditty that offers up just enough carnage and hot chicks to make for a full round of chase-meets-scream-queens enjoyable.

But let’s not get too ahead ourselves. We got plenty of drama beforehand as sweet and sexy Neesa (Julin) is rescued from death over a botched lost-boyfriend-suicide episode. Soon it is a matter of “cheer up the sad and lonely” with a college dose of 2 boys and 3 girls visiting on old abandoned warehouse….(cause that’s what bored college folks do!).

Lots of “that’s what she said” jokes get tossed about long enough to get to the demon summoning part of the film. The group comes upon an old Nazi-rooted box left over from eras past filled with what looks to be a game. After they make it past soldier outfit admiration, it’s right onto the old forbidden text recitation.

Quickly a devil star is formed with knuckle bones serving as the player dice for this playful time-killer. What you gotta love here is the “almost too be expected” proclaiming of “let’s summon a demon” being carelessly projected out for a group vote. The sarcasm is in the stereotypical film injection of this notion as the portal for a nasty rotting demon to emerge. Bad news? Yep, It’s too bad as Kia, the nice breasted young nubile is torn into 2 as a birthing carcass for the “Knuckelbones” killer Nazi demon. Knucklebones may have been called from beyond, but he is intent on having fun in the process.

It’s right out of the frying pan and into the fire as Knucklebones begins to hunt and kill each member of this painfully naive group (who never stop to consider that they can just “leave” the warehouse altogether). A run in with a now grown up survivor and some dope-taking sexed-up troublemakers provides all the bodies needed to inflict some extreme chaos upon.

Now any horror movie that deserved its worth in this kind of formula must have a few important ingredients. Sex, hot babes, dumb decisions, and random extras who just happen to get pulled into the story as kill bait. Check!

Favorite moment? How bout the lining up of murder weapons explained as “car tools” needed to dig out a box…..great stuff! (who carries around a chainsaw in their trunk, anyways….just in case???) 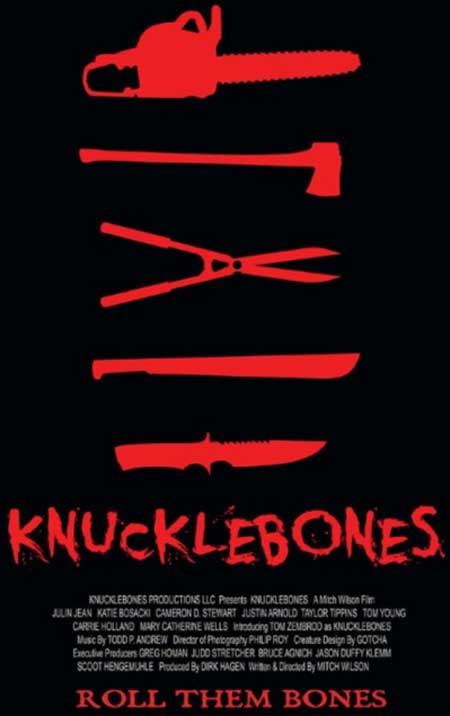 The film is a low budget production that offers some pretty bad ass practical effects work by Darren Burchett and crew who add that extra later of intensity needed to turn this film from typical to extremely bad ass. (If you’ve seen Sweatshop, it has fx as intense as that). The “sex body spilt scene” is appropriately inspiring with plenty more Knucklebones slaughters that follow.

Director Mitch Wilson may be a newcomer, however his knack for what fans want is exceptional in the case of this film.

“Knucklebones” is awesomely macabre and hilarious all rolled into one making for one of the better monster films for 2016. I came into this one not expecting much and was completely flipped around.