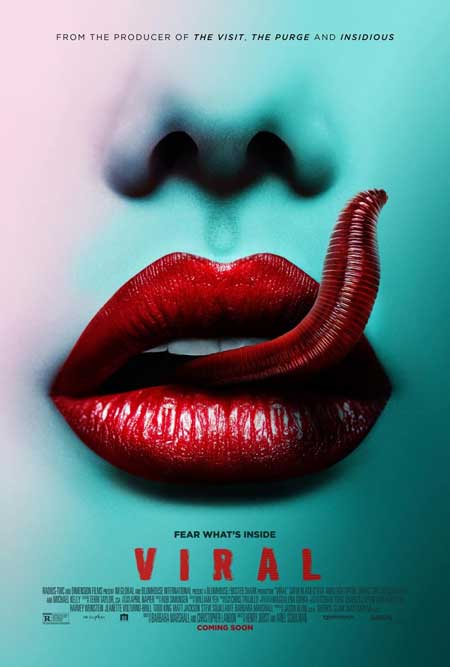 A young woman (Analeigh Tipton) and her family try to survive a viral outbreak that leads to a quarantine. (source Google – as IMDB’s is misleading)

First and foremost, let me get this off my chest; VIRAL is, in no way whatsoever, about a virus. SHOCKED?! Well you shouldn’t be. Anyone with a modicum of sentience or sight can quickly identify this obvious tidbit from the cover-art on IMDB or any Google search. Notice the worm-like thing crawling out of the person’s mouth? Parasite. And as your 7th grade Biology teacher would have told you, a parasite is not a virus. I am guessing the title was chosen as a cheap tactic to grab the attention of our limited attentioned youth by using a hip “social-networking” term they’d understand and hopefully pull them away from catching Pokemons or taking numerous selfies of their vapid selves.

Another thing; the synopsis on IMDB is a lie. Not only is it not a virus as mentioned above, but there is no “documenting” performed by our lead character. That’s a good thing because this falsified synopsis conjures images of a… gag… found footage film… yuck, now I have a bad taste in my mouth…

Though I’m obviously annoyed by the misleading title, Viral, while not ground-breaking, is a decent enough effort by writers Chris Landon and Barbara Marshall, for those whose horror palate is on the light side.

So let’s MC Hammer the film into an easily digestible format for you folks. Emma (Sofia Black-D’Elia) is your average teenager working the grind of high school. She pines after her neighbour, Evan (Travis Tope), whilst her rebellious sister, Stacey (Analeigh Tipton) sucks face with the local drop-kick.  As daily life in the small town drones on, news reports in the background tell us, the viewer, about a parasite doing all sorts of nastiness across the land, though no-one in town pays any real notice. We learn some vital information from Emma’s father, the high school’s science teacher, about parasites which foreshadows a later scene and then we break into act 2 as Emma’s best friend succumbs to a… VIRUS! Just kidding, she falls victim to a parasite and spreads the parasitic “love” via a blood-spraying cough.

By this stage people are now panicking and the town is put into quarantine, right when Emma’s dad goes to pick up her mother from the airport and is on the wrong side (well, right side if you ask me) of the quarantine line. Emma and sis are now alone in the house whilst CDC agents and the military patrol the area. So like any reasonable, clear thinking human would do, the gals decide to head to a party… because nothing bad ever happens at a party in a horror film… As expected, one reveller under the control of a parasite crashes the party, and during the fracas, Emma’s sis receives a face full of blood and one sneaky little stowaway that takes refuge inside her eye socket… Is it just me, or did you blink a few times after reading that line?

With her sister infected and “turning”, Marshall law declared and parasite controlled neighbours on the prowl, Emma, Stacey and Evan must try to survive and escape before the military take matters into their own hands.

So, with a spoiler free spiel out of the way, let’s move on to the nitty gritty.

Acting wise, Emma felt like a real person as Sofia’s performance was stellar. Great, natural dialog really helped and the puppy-like love angle with Evan was done well. Though useless in the grand scheme of things, this aspect of the film would not be out of place in an actual romance movie. I was surprised. All other characters played their parts solidly, adding to the overall polish of the film. All professional grade stuff here, as expected since its produced by horror juggernaut, Blumhouse.

The parasites were pretty cool. Sticking out of its host’s ears like a pair of grotesque feelers, the parasites sensed sounds made by the environment to track its prey as the host was blinded during transformation. The host also emitted a very Predator-like clicking sound which helped the creepiness of it all.

Those expecting typical Blumhouse affair will be sorely disappointed. It’s rather light on scares, nor is it a ghost or possession piece, two genres Blumhouse has beaten to death, resurrected then beaten to death again… So over them…

I can’t say there was much in the way of horror, nor were there many scenes commanding tension. It tries something in the third act but it’s fleeting and a little too late for my liking. Sis’ change was glossed over too, which I felt was a missed opportunity for some gruesome scenes, an aspect one would expect from a film of this ilk. The ending was rather lack-lustre, and felt tacked on too, leaving me kind of dissatisfied. Even the theme of family and the pain and suffering one would go through in losing, or having to end, a family member’s life was skimmed over just as the romantic aspect was dumped as soon as Act 2 came around.

There are a lot of elements to Viral that could have easily made for a solid film. As it’s essentially a mashup of the body/apocalyptic/zombie genres with the added drama and suspense of family, separation and survival thrown in for good measure, Viral has the components for a compelling feature, but unfortunately they’re all underutilised resulting in a film that treads a rather safe and inoffensive line.

Would I watch this again? I can’t say I would. I don’t hate the film, it’s just that it’s too watered down for me. It’s the sort of horror someone not really into horror could enjoy. A film that could present as a gateway for the uninitiated, or the young, into the wonderful and hideous world of fully fledged horror films.

PS: If you’re after a parasitic fix, watch Slither…