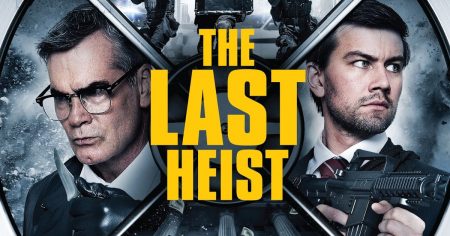 A safety deposit vault heist descends into violent chaos when one of the hostages turns out to be a serial killer. Trapping the well-organized team of bank robbers in the building, the killer is now picking them off one by one.

Here’s a little known fact about your old pal, The Black Saint, I’m a big, big fan of Mike Mendez and his films. Mind you he hasn’t directed too many feature length movies, but I’ve never not had at least a good time at the ones he’s made so far. His first genre effort, The Convent (2000), was a marvelously creepy and scary film, and the genre films he’s made afterwards, The Gravedancers (2006), Big Ass Spider (2013) and Lavalantula (2015) were all loads of scares & fun. His entry in last year’s Tales Of Halloween (called Friday the 31st) might’ve been the most entertaining of the lot. In short, I’m a fan of the man’s work, which is why it pains me to say that his latest effort, The Last Heist, is a major disappointment. 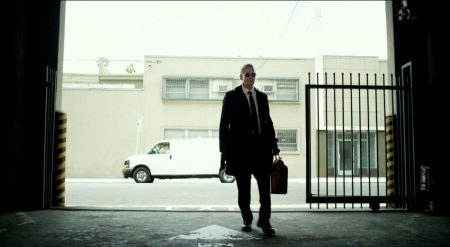 Six thieves have a foolproof plan to pull off a heist that’ll net them a cool $100 million in a job that’ll take no more than ten minutes. They have it all planned out to the most intricate detail (even planning on taking hostages), but they didn’t count on one extra person being in the vault at the same time they arrive. That unexpected person is named Bernard, but he’s better known as “The Windows Killer“, a serial murderer who’s earned that moniker by gouging out the eyes of his victims. In actuality, Bernard just wants to get out of the bank (he’s there only to gather some of his eyeball collection from his safety deposit box), but once he realizes the predicament he’s in, he decides that it might be more fun if he adds some more orbs to his collection… 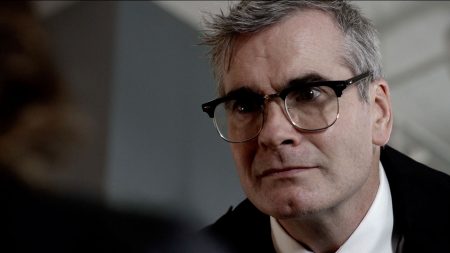 Now how awesome does that setup sound to you? It sounded pretty freaking kick ass to me, especially when you factor in the one and only Henry Rollins playing the psychopath. But I’ll be damned if all I got for my trouble is an poorly written and terribly acted mess that seemed to take pains to point out its inadequacies every chance it could. In addition to Rollins, The Last Heist stars Torrance Coombs as Paul, the leader of the gang, and Victoria Pratt as Pascal, the detective who discovers the heist and acts as a liason of sorts, communicating with Paul from outside of the vault. The rest of the roles in the film are so underwritten that they’re basically little more than wallpaper.

After a few minutes, it’s readily evident that The Last Heist is a slapdash affair at best. It looks terrible, cinematographer Jan-Michael Losada seems to have a mandate to make everything look as drab and unappealing as possible. If that’s the case, then he succeeded with flying colors because this is one of the most lifeless looking films I’ve ever seen. Granted, the majority of it takes place in a building that isn’t supposed to be bright and cheery – but this is the fugliest looking safety deposit vault I’ve ever seen. Actually, it looks more like a abandoned building than anything else. It also happens to be the largest safety deposit vault in the history of mankind, it’s identically monotone labyrinthine corridors seem to go on forever. Which just gives dumb characters more space to disappear for extended periods of time when the script has no need for them to be standing around pretending to fire guns at the police.

If that last sentence sounded odd to you, let me elaborate. Writer Guy Stevenson’s script doesn’t take any time to pretend it cares about any of its characters, so he conveniently has them announce they’re going to check on someone or something every so often in order to have them off screen for more than a few minutes. He then proceeds to have the ones on screen do the stupidest things possible – and I mean stoooopid. For instance, once the robbers arrive (wearing goalie masks), Paul realizes that his brother (the manager of the vault who wasn’t supposed to be there), is indeed there. So what does he do? He takes off his mask! And what does this lead to? Everyone else taking off their masks! I mean, it isn’t like there aren’t more customers in the bank who now know exactly what all the robbers look like. In another jaw dropping moment, two of the robbers who are guarding the hostages decide to take a cigarette break – leaving the hostages all alone! Then they promptly call 911 to report on their dilemma. These crooks were too dumb to even pat down their hostages for cell phones or weapons! The film also wants you to believe that Bernard is making his way around without being seen by travelling through the air vents, never mind that it’s obvious that the vents are way too small for a man of Rollins’ size to get inside of, let alone move around in.

The Last Heist is chock a block full of inanities like these, but at the very least you’d think that with Henry Rollins playing the psycho you’d get something worth watching. But Rollins does very little to stand out in this motley crew of bad actors acting in a bad film. He basically just gives you his Rollins shtick, staid and monotone line readings coming from a dispassionate face. I’m a fan of Mr. Rollins and his work, and this same shtick worked very well for him in a film he starred in earlier this year called He Never Died. But the more I thought about it, the more I realized that this is all Rollins ever offers in any film I’ve seen him in, and personally I think it’s getting boring. But I will admit that his style does fit the character here, I’ll just leave it at that. 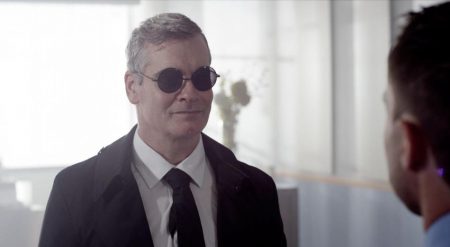 I can go on and on (Lousy score, terrible makeup FX, awful CG blood, etc, etc), but why kick a dead horse? The Last Heist isn’t even minimally entertaining, it just sits there like a lump. I’m not sure if this was a case of Mendez being a “Director For Hire” or not, but his direction is just as lifeless as the script is. It’s a monumental step backwards for him, but he’s a really good director regardless, and I know that his talent will lead him to much bigger and better films. If I was him, I’d just forget that this film even exists and move forward. If you’re in the mood to watch a film that makes no sense whatsoever and seems to revel in its senselessness – The Last Heist is right up your alley. Otherwise, just stay far, far away.