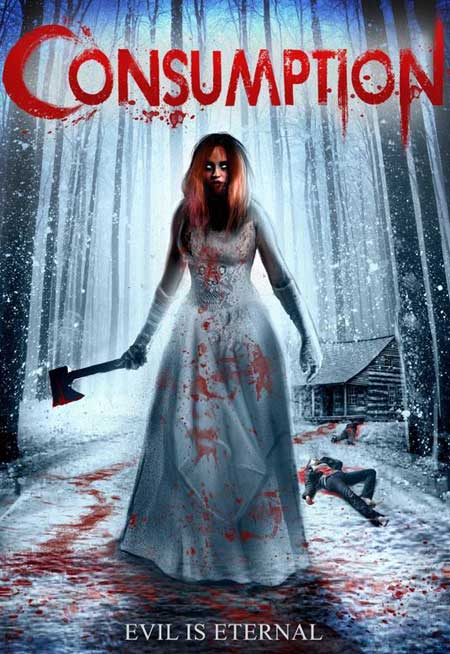 A group of friends travel to the snowy Utah mountains for a weekend retreat, but one of them carries with him a very dark secret, one that will destroy their lives forever as they prepare to face an ancient, unstoppable evil that has been growing in the woods outside their winter resort, one that will soon grow inside them all.

Live-In Fear opens with two couples – Becca (Sarah Greyson) & Seth (David Lautman) and Mallory (Arielle Brachfeld) & Eric (Chris Dorman) – driving for a winter weekend at Seth’s family’s resort condo in the mountains. Both men are in the front seat of the car with Seth driving and looking decidedly haggard.  Just to set the atmosphere, Seth regales them with the “bloody bride” ghost story his grandfather used to tell him. Seth also confides in Eric that his mother died right before the trip and he hasn’t told anyone yet, not even Becca. At the same time, Becca, who is in the backseat with Mallory, hears Seth confide in Eric and wonders why he hasn’t told her.

When they arrive at the resort, Eric starts to unpack the car and Seth gets upset when he removes a particular piece of luggage. Seth hurriedly replaces the piece in the trunk muttering that he’ll get it later himself. As they walk up to the condo, Seth’s mother (Maria Olsen) appears on the walkway ahead of them and then quickly disappears. No one sees her but Seth and he charges off to look for her, telling the others he is going to look for firewood. When Becca, Mallory, and Eric get to the condo, they realize they can’t get in because Seth has the key, so they wait for him to return from his “firewood search.” Patrick (Geoffrey Gould) and Patricia (Nancy Wolfe) – the “Pats” as folks around there refer to them, or “mama” and “papa” as they refer to themselves – arrive and, appearing to work at the resort, unlock the door for them. Patricia asks if they’ll see them in church on Sunday. Mallory pipes up that she is an atheist and she definitely won’t be in church. As a parting response, Patricia says, “You could have made it so easy on yourself.” Meanwhile, Seth encounters a man chopping wood named Ferry (Myles Cranford). When Ferry looks up and sees Seth, he tells him, “You’re not supposed to be here. That’s exactly what they want.” When Seth asks him who “they” are, Ferry replies, “The ones who believe.”

When Seth finally joins the others in the condo, Becca admits that she heard what he told Eric about his mother dying and tries to comfort him in their room. He abruptly tells her he’s not in the mood and that his personal life is none of her business. Seth heads downstairs where Mallory and he start to watch a video tape from a box of family videos that Mallory spotted. The bad quality video resolves into Seth’s mother saying, “Hi Seth. I miss you,” before reverting back to a snowy picture. Seth freaks out and takes the box of videos out to the dumpster.

As the story progresses, each of the four start acting more and more strangely without explanation – no one ever knows what Seth is going to do or say or where he is; Eric is alternately loving and caring or belligerent and physically abusive; Becca starts throwing up periodically; and Mallory is self-mutilating. All the while, eerie music and sound effects play in the background – almost to a fault – providing the constant reminder that this is a very creepy place and some really evil things are going down..

Live-In Fear, aka Consumption, is a low budget horror movie with the budget estimated by IMDb at $50,000. Written, directed, and edited by Brandon Scullion, the movie is obviously his baby.  While the low budget is apparent, most of the acting is fairly good, as are the production values, although a few lines of dialogue are hard to hear. The actors in the four main roles do a good job with their parts and effectively show the range required to swing from nice, normal, and caring characters to possessed, confused, dazed, or belligerent. The special effects are mostly practical and also work within the story. 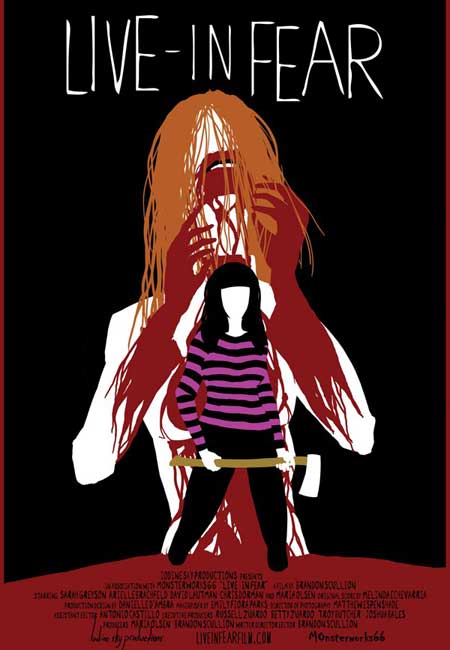 But the story? Aye, there’s the rub. Live-In Fear has its share of goosebumps and chills, but if you’re looking for a well-defined story, you’re probably not going to get it. I can make some guesses, but in the end, all I can tell you is it seems to involve ghosts, possessions, a cult, and an ancient ritual. But maybe that’s just me. I can be a bit thick at times.

With an original release in 2014 as Live-In Fear and a distribution deal for a DVD and digital HD release in July 2016 with Wild Eye Releasing under the title, Consumption, I didn’t get the connection between the movie’s story and either of the titles.  But again, I can be a bit thick at times. I give Consumption a 2.5 out of 5 on a slightly adjusted, low budget scale. But that’s just me.