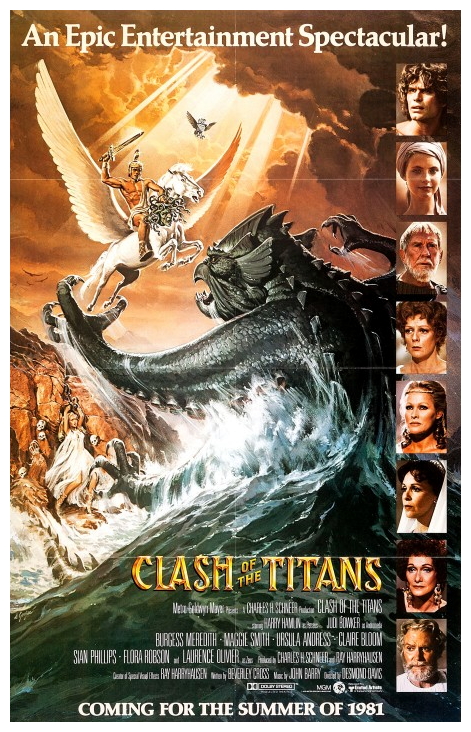 SYNOPSIS:
“By answering a seemingly impossible riddle Perseus, the son of Zeus, wins the hand of the Princess Andromeda in marriage. Trouble appears in the shape of Calibos, the princess’s former love, and his mother, the Goddess Thetis. In order that the dreaded Kraken not be released, Andromeda has to be sacrificed and Perseus searches for the Medusa; her head is the only thing that can stop the Kraken.” (courtesy IMDB)

REVIEW:
If you’re reading this, I have no doubt you already know who Ray Harryhausen is but, just in case you’ve been on Mars the last fifty years, I’ll give it to you in a nutshell. Essentially, Harryhausen was a Hollywood special effects artist who created his own style of stop-motion model animation known as Dynamation. His most famous films include Mighty Joe Young (1949) with his mentor Willis O’Brien, The 7th Voyage Of Sinbad (1958), and Jason And The Argonauts (1963) which features a furious fight with seven skeleton swordsmen. During his life, his innovative effects has inspired many filmmakers, not least being Tim Burton, Joe Dante, Tom Hanks, Peter Jackson, John Landis, John Lasseter, George Lucas and Steven Spielberg. His final film was Clash Of The Titans (1981), after which he retired. Actually, the next announced Harryhausen fantasy was to have been Sinbad On Mars, a truly intriguing idea, but the project was shelved when MGM put up the cash for Clash Of The Titans, the most expensive Harryhausen film ever, at around US15 million. 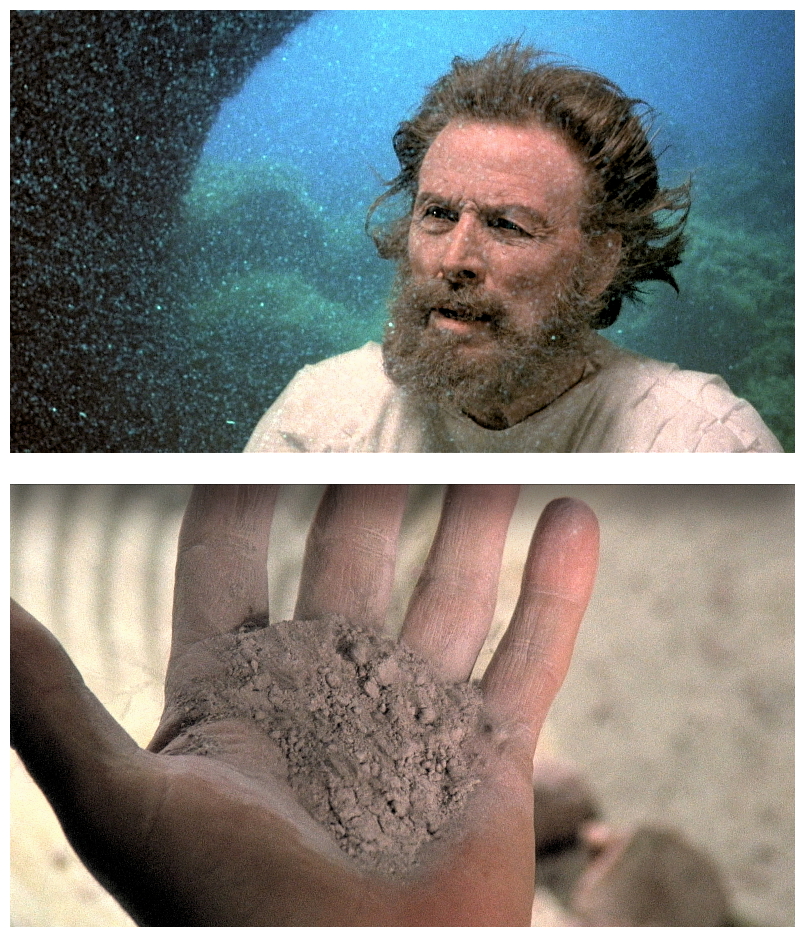 It’s certainly a lavish production, starring respected Shakespearian-trained performers such as Ursula Andress, Honor Blackman, Clair Bloom, Burgess Meredith, Laurence Olivier, Tim Pigott-Smith, Flora Robson and Maggie Smith, but there’s something kind of sad about it, as if Harryhausen’s imagination had been petrified by the numbing waters of some mythic stagnant pond, or trapped in some sort of time-loop ever since The 7th Voyage Of Sinbad, with the same awkwardly shambling monsters and trite plot looking more old-fashioned with each new film. The story of Perseus’s love for Andromeda and their many trials before her final rescue from the Kraken is typically episodic (all Harryhausen stories run in straight lines) but his animation is as good as ever: giant scorpions; the winged horse Pegasus; the melancholy monster Calibos; the gigantic Kraken; and the fiendish gorgon Medusa with her hair of writhing snakes. 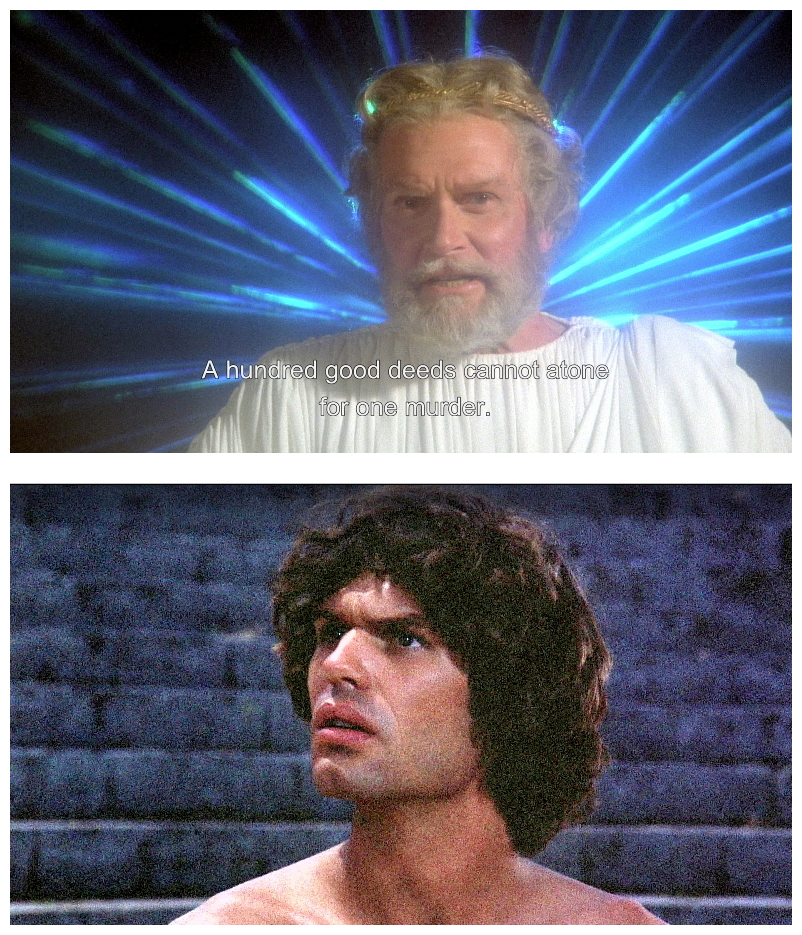 King Acrisius of Argos (Donald Houston) becomes jealous of his own daughter Danaë (Vida Taylor) and imprisons her and, after Zeus (Laurence Olivier) impregnates her, sends Danaë and his newborn grandson Perseus to sea in a wooden chest. Thanks dad. In retribution, Zeus kills Acrisius and orders Poseidon (Jack Gwillim – Rex Harrison rejected the tiny role) to destroy Argos and to, “Release The Kraken!” Meanwhile, Danaë and child arrive on the island of Seriphos where Perseus grows up (Harry Hamlin). Calibos (Neil McCarthy), son of the sea goddess Thetis (Maggie Smith), is a young man engaged to marry Princess Andromeda (Judi Bowker), the daughter of Queen Cassiopeia (Siân Phillips) and heir to the rich city of Joppa. Calibos has reduced the countryside to a lifeless swamp and hunted Zeus’s sacred flying horses to near-extinction. Zeus punishes Calibos by turning him into a monstrous satyr and sending him into exile. 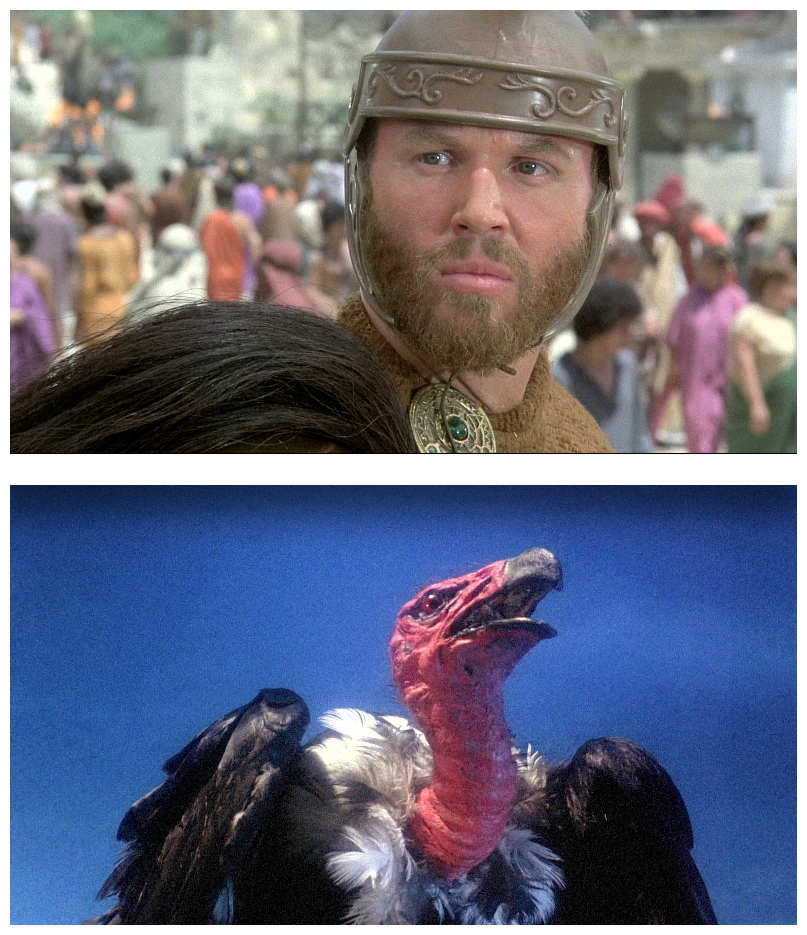 Thetis doesn’t like this at all, so she transports Perseus from Seriphos to an abandoned amphitheatre in Joppa, where he meets an old bard named Ammon (Burgess Meredith) and learns that Andromeda is cursed unless her suitor successfully answers a riddle – fail and be burned at the stake (not unlike some dating rituals today). Zeus wants to help, and sends Perseus a special helmet from Athena (Susan Fleetwood) which makes its wearer invisible, a magical sword from Aphrodite (Ursula Andress, who only gets one line in the whole film!) and a shiny shield from Hera (Claire Bloom). Perseus captures Pegasus, the last of the flying horses, and follows Andromeda to the next riddle. Calibos attacks, Perseus loses his helmet, and Calibos loses his hand. Perseus meets Thallo (Tim Pigott-Smith), introduces himself, correctly answers the riddle, presents the severed hand of Calibos, and is given permission to marry Andromeda. 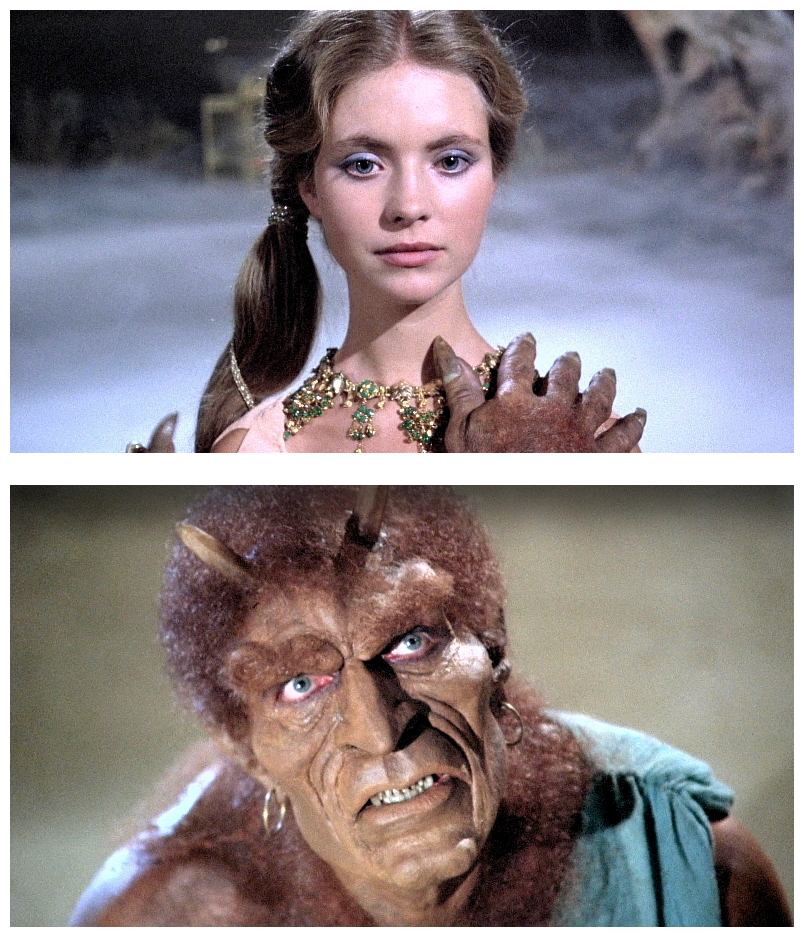 At the wedding, Queen Cassiopeia compares Andromeda’s beauty to that of Thetis herself, so Thetis demands that Andromeda be sacrificed to the Kraken on pain of Joppa’s destruction. Now Perseus needs to work out how to defeat the Kraken. Zeus tells Athena to give up her owl Bubo, but instead she orders Hephaestus (Pat Roach) to build a solid gold mechanical replica. Perseus is led to the Stygian witches (Flora Robson, Anna Manahan, Freda Jackson) and forces them to reveal how to defeat the Kraken: Use the head of Medusa the gorgon, who lives on an island in the river Styx on the edge of the Underworld. Once on the island, Perseus battles Medusa’s guardian, a two-headed dog named Dioskilos (Greek hell-hounds traditionally had three heads, but Dioskilos has only two because it would have taken too long to animate a third head). After a game of cat-and-mouse with Medusa, Perseus uses the reflective underside of his shield to confuse her, decapitates her, and collects her head in his cloak. 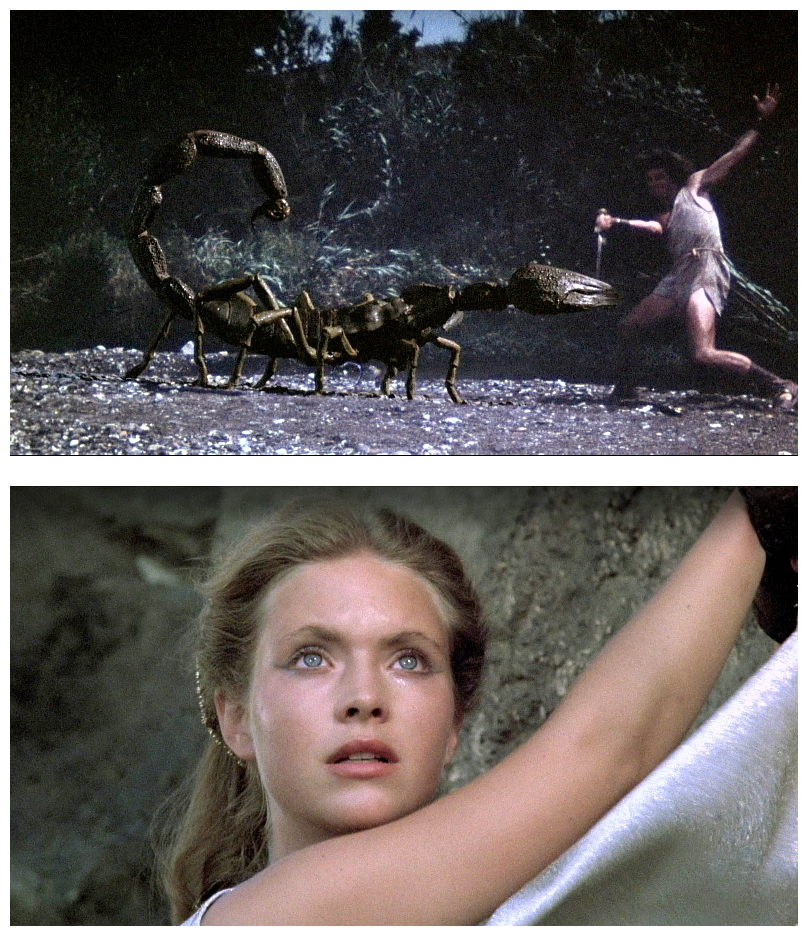 As Perseus and his friends prepare to return to Joppa, Calibos sneaks into their camp and punctures the cloak carrying Medusa’s head, causing her blood to spill and spawn three giant scorpions. Thallo manages to kill one of them, but then he is murdered by Calibos. Perseus slays the other two scorpions, kills Calibos, and grieves Thallo’s death. When Perseus finally reaches the amphitheatre in Joppa, he collapses unconscious from exhaustion. Andromeda is chained to the cliffs outside Joppa, and the Kraken is summoned from its watery slumber. Bubo attracts the Kraken’s attention until Perseus (whose strength was secretly restored by Zeus) flies in on Pegasus. Perseus petrifies the Kraken with Medusa’s head, and it crumbles into the ocean. He throws the head into the sea, frees Andromeda, and they start making wedding plans. The gods agree that Perseus and his new wife will live happily ever after, and Zeus forbids the other gods to pursue vengeance against them. 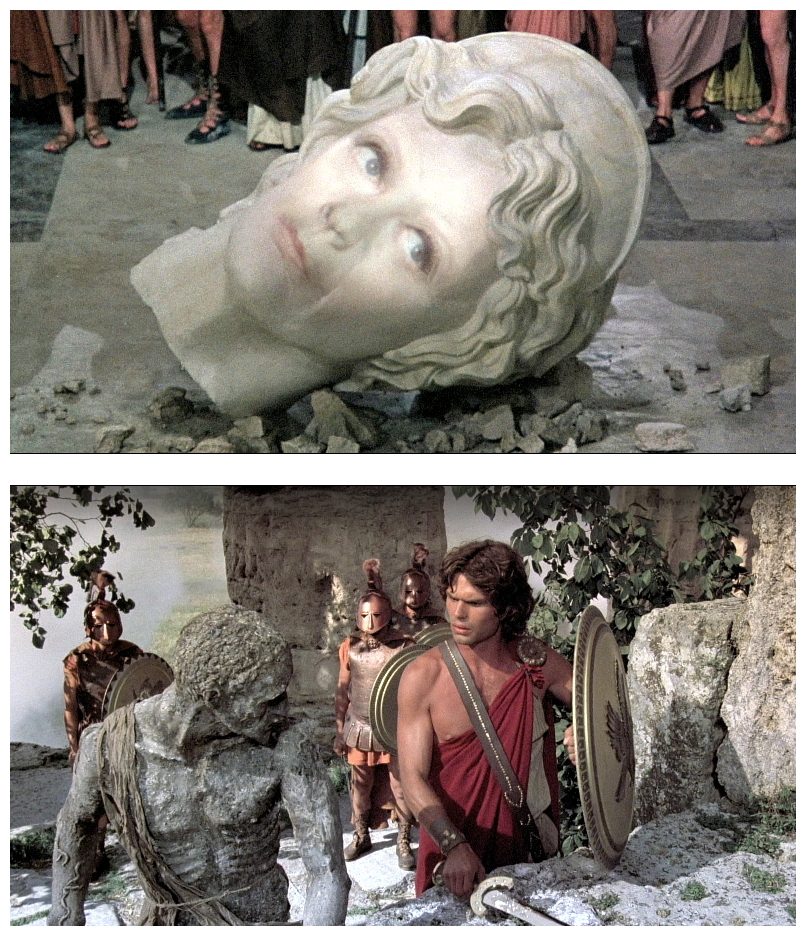 Newcomer Harry Hamlin was cast as Perseus, but not before Malcolm McDowell, Michael York, Richard Chamberlain and Arnold Schwarzenegger were considered for the role. Producer Charles Schneer insisted that Greek heroes should be athletic but not overly muscular, relying on cunning rather than strength, and felt that casting a muscular actor was a cliché more suited to the ridiculous Italian sword-and-sandal movies of the sixties. To Hamlin’s credit, Clash Of The Titans could have been a lot worse: The original script was written for a juvenile audience, and called for Perseus to remove Medusa’s head by simply throwing his shield at her. Hamlin hated the idea from the very beginning, as it wasn’t in keeping with the actual Greek Mythology. When the day came to film the scene and it still hadn’t been changed, he threatened to quit the film and fly home. He refused to come out of his trailer until Harryhausen and Schneer agreed to re-write the scene accordingly. 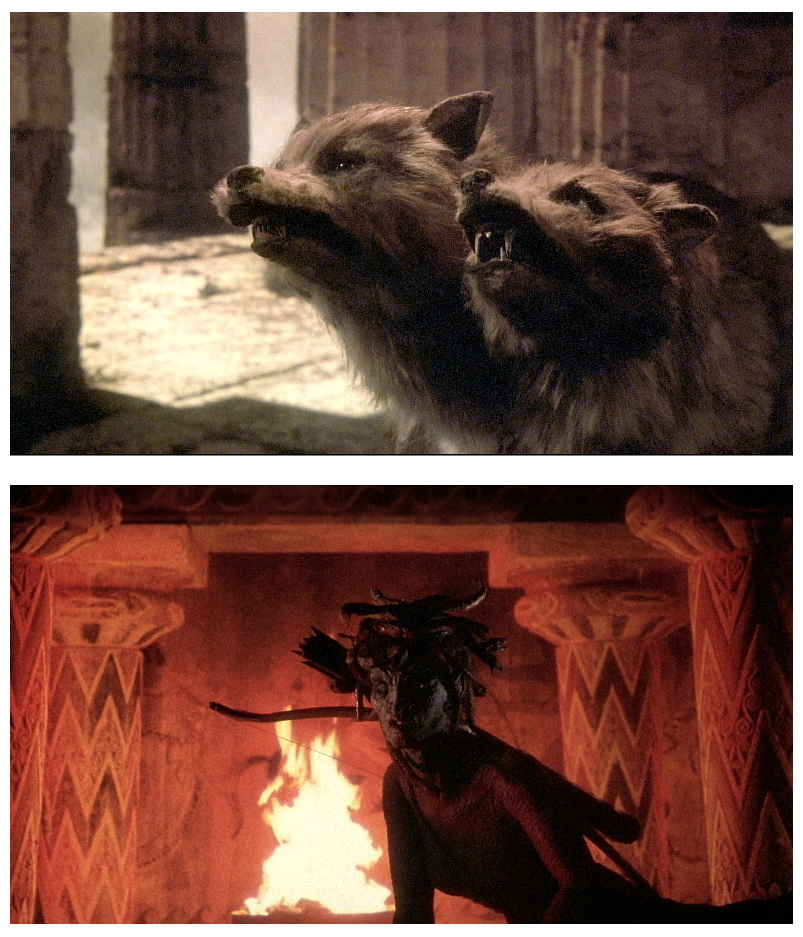 Unfortunately, there are many other mythological anomalies. Traditionally, when Medusa’s head was severed from her neck, Pegasus and the giant vulture-like Chrysaor spring forth. The Titans were actually the gods who ruled before the Olympians, Kronos and Atlas being the most famous, but none of the Greek Titans appear in the film. According to the script, the so-called Titans are Medusa (not a Titan) and the Kraken (not Greek at all, but Norse). Calibos, also known as Lord Of The Marsh, is actually based on Caliban, the beast-like antagonist in William Shakespeare‘s The Tempest. Despite being surrounded by god-like thespians, the best performance in the film comes from the spirited and intelligent Judi Bowker as Andromeda. The worst performance is that of the dopey clockwork owl Bubo, a magical creature of metal whose mannerisms were inspired by R2-D2 but comes across more like a broken coffee percolator.

Remember the outrage filmgoers felt toward Ewoks or Jar Jar Binks? Multiply that by ten. Bubo makes a cameo appearance in the 2010 remake to much derisive laughter, when Perseus (Sam Worthington) wisely decides not to take the mechanical monstrosity on his quest. As if to rub salt into an already gaping wound, ‘Bubo’ is a scientific term for the genus of eagle owls and horned owls, but the robot we encounter is based on a barn owl, which is actually the genus Tyto and not a Bubo at all. For the first time in his career Harryhausen found it necessary to hire two other animators to assist him in the myriad effects required for the production. One was stop-motion veteran Jim Danforth, and the other a relative newcomer, Steven Archer, who would later work on Krull (1983), The NeverEnding Story (1984) and The Gate II The Trespassers (1990) before retiring from the industry altogether to become a BBC Radio researcher.

Special effects in the eighties were advancing in leaps and bounds, and the optical processing that unites animation with live action looked pretty weak alongside its digital contemporaries, with chunky matte lines, fuzzy background plates and a generally grainy appearance. It didn’t even get nominated for an effects Oscar that year. Clash Of The Titans is still good fun and easily made its budget back, but more sophisticated technologies (such as Go-Motion developed by Industrial Light & Magic) had eclipsed Harryhausen’s techniques, so MGM passed on the sequel (to be called Force Of The Trojans) causing Harryhausen and Schneer to retire from active film-making altogether. And now, as we crawl across the finish line of another review, I’ll wish you a good night, promising to see you again next week – on time – for more cinematic smegma than you can shake a schlock at for…Horror News! Toodles!