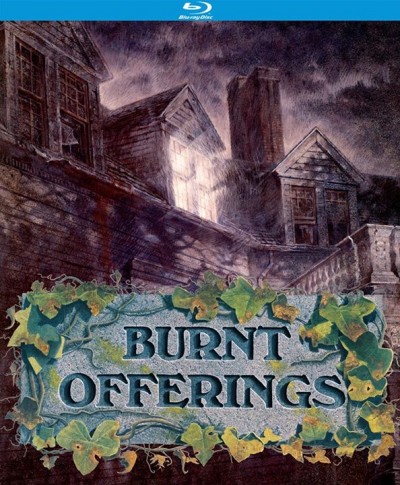 A family of three takes a summer vacation at an enormous mansion in the hopes of relaxing but instead finds themselves in the grip of a nightmare as several horrific events threatens to destroy them.

Burnt Offerings (1976) is Dan Curtis’s film adaptation of the 1973 novel of the same name by the late Robert Marasco. It’s the novel that reportedly inspired Stephen King to sublimate his experiences as a caretaker at the Stanley Hotel in October 1974 into his second novel The Shining (1977) following Carrie (1974). Much of the plot devices from the former were aped in the latter: a mother and father spend a season in a huge manse with their young son; a large structural abode has a life of its own and thrives off of the life blood of its human dwellers for survival, etc. 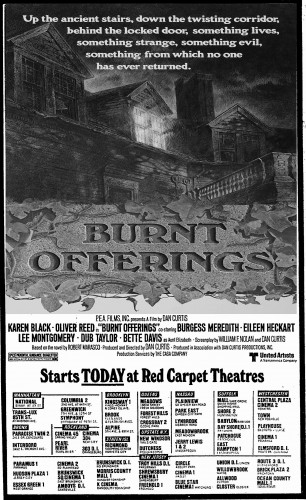 Burnt Offerings opened on Wednesday, September 29, 1976 in New York “at Red Carpet Theatres” (as opposed to what, black carpet theatres? Always wondered about that). It’s a film that I caught up with five years later on a repeat NBC-TV airing and it later became a perennial favorite on many independent stations during the 1980’s. When I saw the film on VHS I was shocked at how much footage was cut from some of its television airings, which is a shame because it moves at a deliberately slow but effective pace. 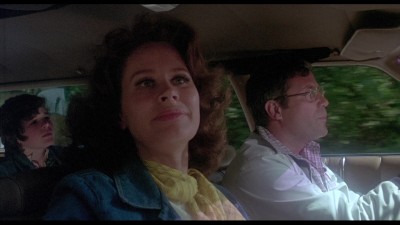 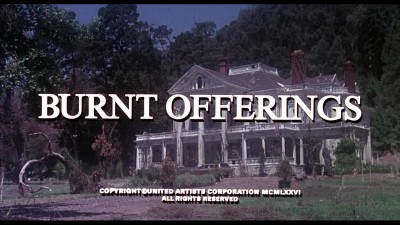 Bolstered by terrific performances and a better-than-average script, the real star of the film is the Dunsmuir Hellman Historic Estate in Oakland, California, a sprawling 37-room mansion on 50 acres of gorgeous land that belies the ghetto that exists to the west of it. If it looks familiar, that’s because it has been featured in a handful of other films, most notably as the Morningside mortuary’s exterior in Don Coscarelli’s classic Phantasm (1979) and in the James Bond film A View to a Kill (1985). Here, it has been dressed to look decrepit and creepy. Oliver Reed and Karen Black are Ben and Marian Rolf, a couple who consider renting this incredible dwelling for the summer with their young son, David (Lee H. Montgomery of Ben), and Ben’s Aunt Elizabeth (played brilliantly by Bette Davis). They are greeted at the house by Walker the Handyman (Dub Taylor of those crazy Hubba Bubba commercials from 1980) who introduces them to the renters, two eccentric siblings played wonderfully by Eileen Heckart and Burgess Meredith. I wish that they had larger roles in the film! 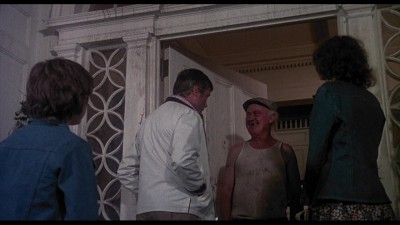 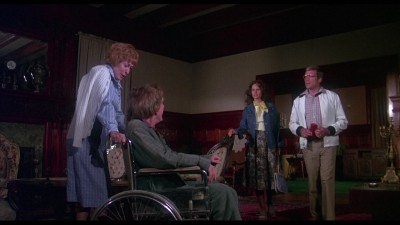 They inform the Rolf’s that they can rent the house for two months for $900.00(!) if they agree to a slight catch: they must agree to take care of their 85 year-old mother, Mrs. Allardyce, who lives in a room at the top of the mansion. All they have to do is prepare food for her three times a day and leave it in her sitting room. Understandably hesitant to buy into this peculiar “arrangement”, Ben and his family return home. Marian is gung-ho from the get-go, so Ben reluctantly acquiesces to her wish to rent the house and concurs by default with the terms set forth by the Allardyces. These opening introductory scenes set the tone for the rest of the film, as both the Rolf’s and the audience are kept in the dark as to what the owners have up their sleeves. Look carefully at Oliver Reed’s glasses – they do a disappearing/reappearing act throughout the first ten minutes.

Returning to the house with Aunt Elizabeth in tow, the Rolf’s engage in some fun banter concerning Elizabeth’s desire to procure a driver’s license. Director Curtis sets up the Rolf’s as a family that the audience can relate to and almost feel as though they are along for the ride. When they reach the house, the Rolf’s are shocked to find that the Allardyce’s have left them the keys to the home and are nowhere to be found. As Davey is ordered by his father to unpack the car, Marian attends to Mrs. Allardyce. Despite knocking on her door multiple times and talking to her, the old woman never responds. Marian assumes she’s sleeping. 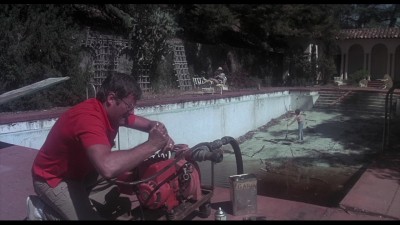 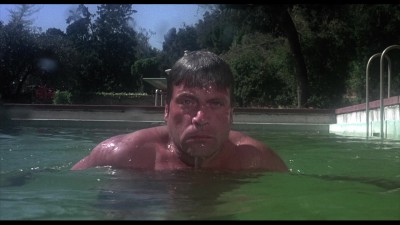 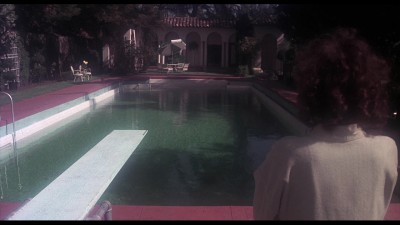 As the days progress, Davey and his father clean out the pool and fill it with water, while Marian prepares meals for Mrs. Allardyce and becomes more in awe of the old woman’s music box and photo collection, the latter of which is strange in two respects: not only are the photos of people who are of varying age and do not appear related, but none of them are smiling. When Marian listens to the music from the music box, she goes into a dreamlike trance, oblivious to all external sounds. The uneventful settling into the house suddenly takes a U-turn when Ben inexplicably tries to drown Davey in the pool during a maniacal episode of unprovoked rage. Later that night, Ben, contrite and baffled by his own behavior, dreams of his mother’s funeral when he was just a young boy. In the dream, cinema’s scariest chauffeur smiles at him. As the film progresses, a series of near-fatal “accidents” that threaten the very fabric of the family unit and their physical well-being leaves the viewer wondering why they just don’t get the hell out of the house, but later the film reveals why they don’t. It is in this respect, as well as the film’s denouement, where the film triumphs over the novel. 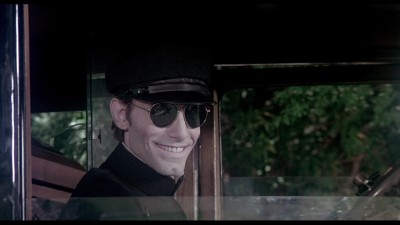 The one image people tend to remember from this film more than any other is Anthony James’ frightening turn as the chauffeur. His smile behind the dark sunglasses is rumored to have made teenage girls scream as they watched it in a theater or, more often than not, at sleepovers.

Dan Curtis, the creator of the popular TV show Dark Shadows, used his TV crew to make this film, much like Alfred Hitchcock did when he filmed his self-proclaimed “fun picture” Psycho (1960). Fortunately, he shot the film with a cinematic eye, which results in some very interesting camerawork. He employs the use of low-angle shots with the idea of the theatrical audience in mind, “looking up” at the actors on the screen. I wish that I had seen this film in a theater! If you have the patience to watch a thriller that takes its time, Burnt Offerings is well worth seeing.

Kino Lorber has done right by Burnt Offerings and offers up a beautiful, much improved transfer over the original MGM/UA 2003 DVD which was drab, muted and lacking in detail. Originally scheduled for release on laserdisc in 1997, the project was postponed and eventually scrapped altogether due to MGM’s inability at that time to secure suitable film elements for the transfer. The print used here is fairly free of dirt and the increased resolution from the high definition gives the image a much-needed boost. The film was shot in August 1975 and I originally thought that it was designed with a soft look, but that was just due to the lackluster transfer (the VHS tape, with Macrovision, was even worse!).

The film’s sound, which was problematic on the VHS and DVD transfers, is also much improved. The dialog is now more intelligible and Robert Cobert’s musical score, indubitably one of the creepiest and most frightening scores ever written for a film, fairs far better here, too. The mix is monaural. Kino, for some reason, doesn’t provide subtitles, so if you want them hold onto the 2003 DVD.

A soundtrack album for Burnt Offerings was finally issued in 2011 and can be purchased here.

If you love this film as much as I do, purchasing this Blu-ray is a no-brainer. Another thing that Kino Lorber has done, and they really need to be commended on this, is include the original United Artists/Transamerica logo that appears before the film begins. 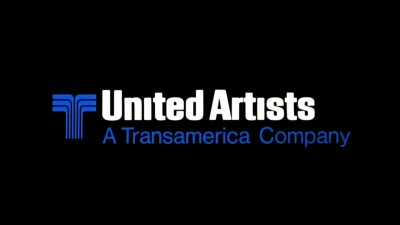 This may not seem like a big deal, but to us die-hard film aficionados, this is a huge deal. Seeing a film from the very start of the first frame is very important, and the studio logo before a film begins is not separate, it is a part of the film viewing experience. The Warner Brothers logo that opens William Friedkin’s The Exorcist (1973) is so integral to the film that the music that begins the film starts playing over the studio logo. Billy Goldenberg’s icy music plays over the “Universal/An MCA Company” logo in Steven Spielberg’s Duel (1971) as does the underwater machinery in Jaws (1975) prior to that film’s start. In the 1980’s, it was possible to see these logos before a film’s start as most of the transfers were done from theatrical prints. As we got into the 1990’s and the 2000’s and telecine transfers became more common, the original studio logos were being replaced with the newer and fancier studio logos. Now, the original studio logos are really in danger of disappearing altogether (Youtube is really the only place to see them). Unless companies like Kino Lorber, which really have the cineastes best interests at heart, continue their excellent work of retaining the original film logos, those very logos will become a lost part of cinema history.

I visited the Dunsmuir House and Gardens (as it was known back then) while in California on business. The last four photos that I have included were taken by me. The first is of the house taken on 10/24/1997 and it didn’t look as though it had aged a day: 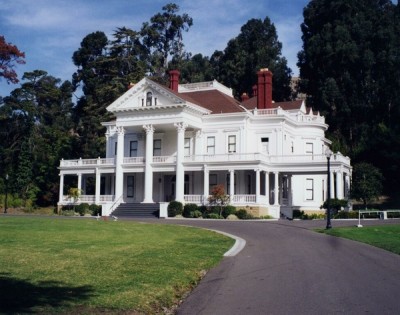 These three taken on 07/24/1998 of the entrance to the swimming pool and the pool itself, which was off-limits because earthquakes in the area have made the land unstable: 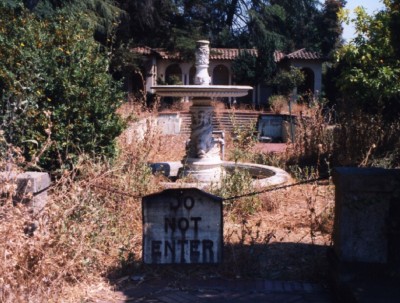 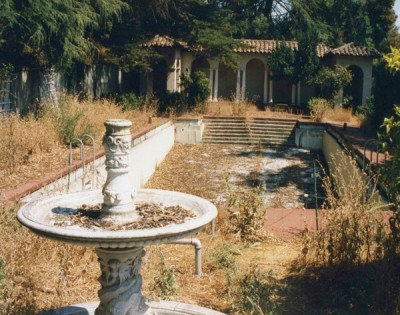 This is the gazebo that Davey falls off of in the beginning of the film: 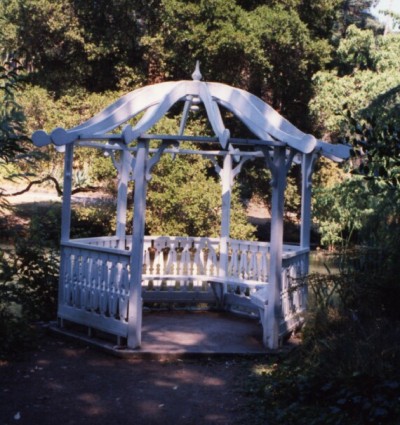 The disc includes the following extras:

The first commentary is with Karen Black, Dan Curtis, and the film’s screenwriter William F. Nolan and has been ported over from the original 2003 MGM/UA DVD release. I wish that they all had viewed the film prior to the commentary, as some of their comments are truly unbelievable. This commentary is a riot to listen to.

There is a second commentary on here recorded this year by film historian Richard Harland Smith, and it’s one of the most entertaining, insightful and informative commentaries that I have ever listened to. Mr. Smith got me thinking about things that I never thought of before, particularly in regards to Marian’s distancing from her family, and even manages to tie in a discussion about the Vietnam War. He speaks at length about the meaning behind the film’s title in addition to the notion of the “Old Dark House” where evil lurks.  I wish that more genre films would include commentaries like this.  Excellent.

There are onscreen interviews with Anthony James (he played the chauffeur), Lee Montgomery (he played Davey) and William F. Nolan (he wrote the screenplay).

Kino Lorber has retained the film’s effective key art for the cover.

Burnt Offerings was the first thriller I ever saw and it made an indelible impression on me that has stayed with me for the past 34 years. It’s now available just in time for Halloween, and is truly creepy, one of the best PG-rated thrillers of all-time.  A superb release!

I have my fingers crossed that Kino Lorber gets their hands on The Changeling (1980) and One Dark Night (1983) as they both need high definition upgrades.