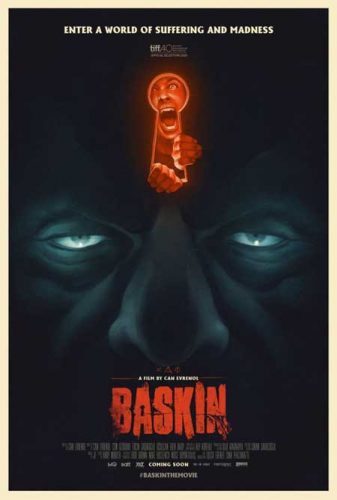 A squad of unsuspecting cops goes through a trapdoor to Hell when they stumble upon a Black Mass in an abandoned building.

Five cops sit around a small, empty diner. They talk about sports, they talk about gambling, and they crudely joke about sex. In the kitchen, a guy working the grill starts cooking up some red meat. One of the cops has a really bad headache and so goes to the restroom to compose himself, and there is a frog in there, right up on the soapdish. It is with these simple events that Baskin begins, yet somehow writer/director Can Evrenol has already brought his audience to the edge of their seats, waiting for something horrible to happen, hanging on every beat.

There is already an atmosphere, a mood, an established sense of dread and foreboding that tells us we are in for something horrifying, and yet so far nothing has really happened. This is what so many Hollywood studios spend millions upon millions to achieve, with big name actors and CGI and “viral” campaigns, yet here we are, watching an independent movie, the director’s very first feature by the way, and we’re already nervous and anxious within the first few minutes. It’s a wonder how important good writing can be.

First made as a short film, Baskin transformed into a feature length film and found its way to international film festivals at the end of 2015. Written and directed by Evrenol (and co-written by Ogulcan Eren Akay, Cem Ozuduru, and Ercin Sadikoglu), this is a horror film by way of nightmare from Turkey (we don’t get a lot of horror from Turkey, but when we do, is it ever disturbing).

The basic plot is simple: a group of cops responds to a call for back-up and find things far more horrifying than they could have ever imagined. But really, that’s the only thing “simple” about this film. If I had to make a comparison to something already out there, I’d say think Fulci (his overall style, but specifically The Beyond) meets Hellraiser and that crazy video they watch in Event Horizon, but even knowing that still won’t prepare you for this surreal journey into the depths of hell. 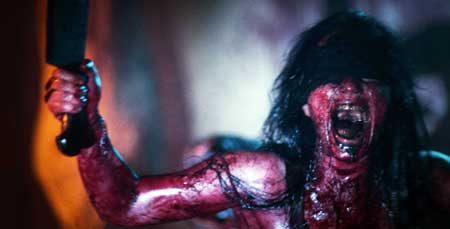 I’m trying to stay vague here, as I think this is a film you need to experience with as little knowledge as possible, so as not to bias your viewing. Suffice it to say, the cops are sent to an old, run-down building, a former police headquarters, in a mysterious town that seems very out of the way and has plenty of legends and spooky tales surrounding it. As they enter the building, they come across one of the police officers who was there to begin with. We don’t know why they were called there, we don’t know what has happened, but we know something isn’t right. Soon we’re wondering if we aren’t dealing with some kind of cult, or black magic, or demonic forces. And then…well, it only gets scarier the more we learn.

This film is as much an experience as it is “only a movie.” It employs a non-linear approach as we wind our way further down the spiral into increasingly horrifying territory. The audience is going to have a lot of questions as they make their way through Baskin: Is this a nightmare? Where has reality gone? Have I died and gone to hell? And then we get to the best part, when the film ends, and we see how everything winds up, and we get to look out the window and see that we’re still here, still alive, and have the briefest of reality checks before we start the movie all over again and see if we can’t find the answers to some of our questions.

Everything about Baskin is creepy. Everything. The sound design and music add just the right touch to the images on the screen. Everything is just dark enough, just gritty enough, to make ordinary things seem extraordinary – how do you make grilling meat creepy? How do you make a frog hopping seem ominous and scary? Watch Baskin to find out. But it’s not only that. Every person the five officers come across, without fail, have something about them that makes you not trust them. 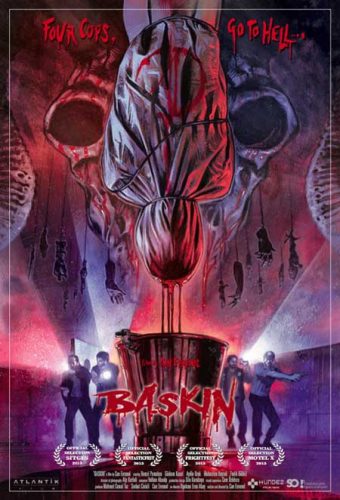 The waiter at the diner, the people who point them in the direction of the building, the officer who preceded them on the call…any of them could be monsters for all we know. Add in the slow burn feel of the film, how everything seems to be building toward something, slowly but not ploddingly, never dragging, never stalling, but moving consistently forward, and you’ve got every key ingredient to a scary, thought-provoking, intense film. This is for the extreme fans out there, the splatterpunk fans and the gorehounds, and at this moment, halfway through the year, I have to put this very near the top of my “best of 2016” list. I absolutely cannot wait to see what this film making team does next.