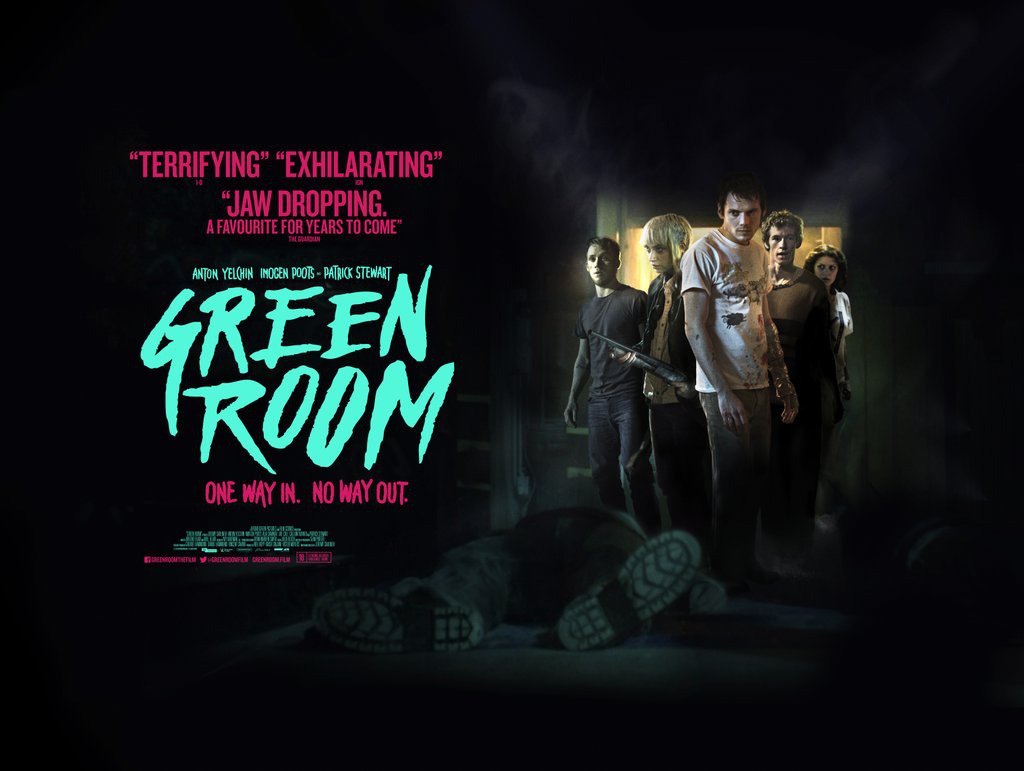 After witnessing a murder, a punk rock band is forced into a vicious fight for survival against a group of maniacal skinheads who are trying to eliminate all evidence pertaining to the crime.

A struggling punk band calling themselves The Ain’t Rights find themselves in a situation that most certainly isn’t too right when they stumble upon the aftermath of a murder after playing a gig in a Neo Nazi, white supremacist filled club in writer/director Jeremy Saulnier’s latest film, Green Room. And while it might not sound too much like a horror film, trust me when I say it most certainly is. And quite a potent one to boot. 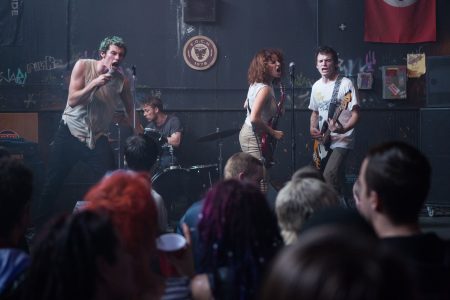 The four members of the Ain’t Right’s are their singer, Tiger (Callum Turner), Bassist Pat (Anton Yeltchin), Guitarist Sam (Alia Shawkat) & drummer Reece (Joe Cole). And as they’re desperate for a gig, they accept an offer to play at a Neo Nazi club located somewhere in Oregon (the promise of $300 doesn’t hurt too much either). After setting up their gear and taking the stage, they display their punk fearlessness by launching into a cover of The Dead Kennedy’s “Nazi Punks Fuck Off“, which immediately turns the audience against them. But they get through it, and in their haste to make a really quick exit before the crowd gets really angry, they rush into the titular green room and find a murdered woman. At first, the situation is relatively calm and everyone seems to be on the same page, but it becomes readily evident to the band and to the murdered girl’s friend, Amber (Imogen Poots) that the skinheads have no intention of letting any of them leave alive. Led by a man named Darcy (Patrick Stewart), the thugs make their first move when the band members try to leave the room (resulting in a truly horrendous injury to Pat). Once they realize that there’s no way they’re going to leave the conventional way, they decide that barricading themselves into the room to buy some time is their best option. As the film progresses, the skinheads (using stronger weaponry & attack dogs) make repeated efforts to get at the band. But while they slowly whittle away their intended targets, the slight and physically unimposing Amber turns out to be the nut that refuses to crack. 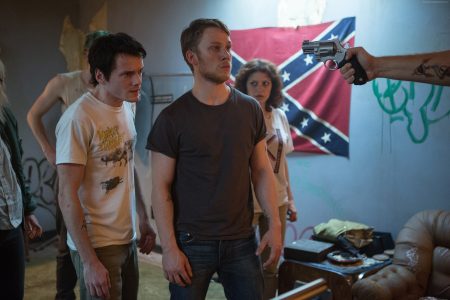 What Green Room turns out to be is an unabashed siege film. Much like Romero’s zombies from Night Of The Living Dead (1968) or Carpenter’s street gang from Attack On Precinct 13 (1976), the skinhead thugs of Green Room come at the band members in ever greater waves. Accordingly, it seems that after each attack, a member of the band is murdered, making the situation for the survivors ever more dire and desperate. Add Stewart’s dark and sinister Darcy to the mix, and Green Room becomes quite a tense and grisly thriller. Director Saulnier smartly amps up the action logically and realistically in ever bloodier scenarios that never feel forced or cheap. He also uses the cramped confines of the club ingeniously, keeping most of the proceedings dark and ominous. His script is sharp as well, but oddly enough it does grow a bit monotonous during its final third where the action moves outside of the club. The role of Darcy also takes a backseat to the rest of the action, which hurts the film because Stewart effectively downplays Darcy where other actors might try to overplay the role. His smooth and sinister delivery is sorely missed in the final third of the film. 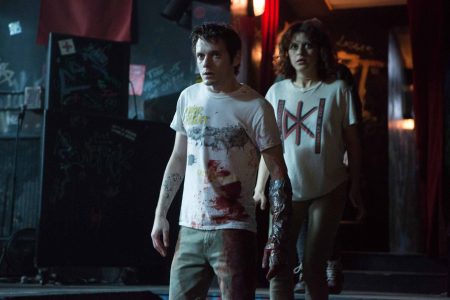 What’s especially interesting about Green Room is the realization that no one is safe here. Saulnier’s script starts bumping off major characters pretty quickly & relentlessly. And those characters who make it into the later stages of the film are in such bad shape that I think they’d prefer death. I knew the film was going to be a balls to the wall thrill ride immediately after Yeltchin’s character, Pat, receives one of the most heinous injuries I’ve ever seen in a film. I literally recoiled in my seat when the injury was revealed, and I wondered to myself how long his character would last. All of the deaths here are pretty graphic and all of them will garner a reaction from whomever is watching the film. It’s one of the goriest films I’ve seen this year by far, so gorehounds will be suitably appeased. 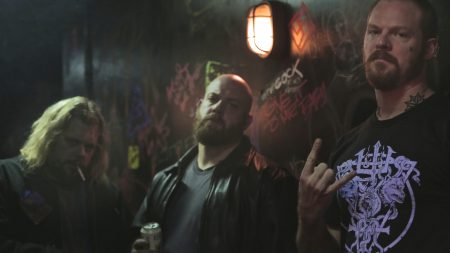 Although all of the acting is fine here, it’s hard to shine against great character actors like Patrick Stewart. But the cast of Green Room do a fine job shining for as long as they’re on screen (some are dead before too long). Special kudos to Imogen Poots, who starts off as mousy and timid but eventually ends up defiant & a good sight tougher than she initially seemed to be (she also gets the film’s final acerbic line of dialogue). Stewart does a great job of being menacing and nearly Machiavellian in the way he orders his troops around, but there are a few moments where his accent falters and he goes back to sounding like Jean Luc Picard barking orders to members of Star Fleet. It doesn’t happen often, but when it does it is noticeable. And as I previously mentioned, the film suffers when he’s not around – and he’s not around much during the film’s final third. 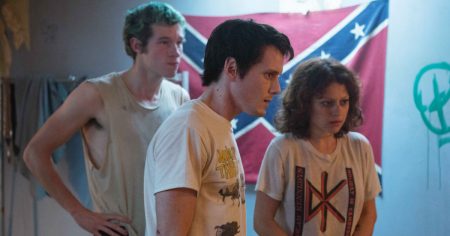 Despite those few minor misgivings, Green Room remains one hell of a good movie, it’s a vicious, violent & tense thriller that isn’t afraid to spill blood all across the screen, and does so in a gleeful manner that’ll have you catching your breath more than a few times. Sadly, the film hasn’t gotten the widest of releases so it might not be too easy to find it at your local theater. But I encourage all of you to seek it out, and if that doesn’t work out then keep your eye open for its inevitable DVD/Bluray release. It’s definitely a film that I’ll be adding to my personal collection.