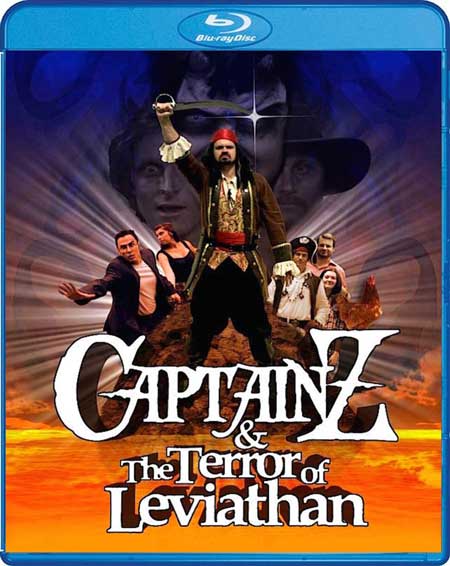 In 1714 Captain Zachariah Zicari stops a group of possessed townsfolk from using a powerful amulet that would have released the ultimate evil, the Leviathan. Fast forward to 2014 and the amulet is again in the wrong hands. Can Captain Z save the earth?

Take a moment and read that title again. it holds so much cheesy promise, doesn’t it? That was my thought as well.

The film was directed, stars, and was co-written by Steve Rudinski, who is not exactly new to the “make your own movie” game. He has ten films to his credit as either writer, actor, director or some combination thereof.

His co-writer on this film is Zoltan Zilai, who appeared in at least one of Mr. Rudinski’s previous films, EVERYONE MUST DIE!, as well as an uncredited appearance in the blockbuster SUPER 8.

A lot of the cast in this film worked on previous films with Mr Rudinski, specifically EVERYONE MUST DIE! Aleen Isley, Erica Benda, Seth Gontkovic. Scott Lewis, and Aaron Wilkinson all appeared in that film, and I also noticed in the credits that many of the actors were also crew. One of the tricks to making an indie film is multi-tasking.

So our story begins in the town of Riverwood, Ohio in the year 1714. A group of local pagans/devil worshippers/whatever have gotten their hands on an ancient artifact that will allow them to open a portal to another dimension and release The Leviathan upon mankind. They have captured the girl friend of the legendary pirate Captain Zacharia Zicari (Zoltan Zilai) to be the sacrifice that releases the demon. See, they need a “whore with flame red hair” and she not only fits the bill, but her death will also piss off the good captain a lot.

Unfortunately for them, Captain Zicari is able to stop them just in the nick of the time, but not without a price:he stops the beast from coming through the portal, but is himself trapped in the other dimension.

300 years later, the locals celebrate the legend of the good captain and his sacrifice. The town is approaching the annual celebration of “Captain Z day”, and the local museum is preparing for the influx of tourists.

Sterling Kincaid (Scott Lewis) is the head curator at the museum. His staff is pretty small, consisting of his son Neal (Josh Devett), local fathead J.T. (Joshua Antoon), the totally uninterested in any of it Samantha (Cerra Atkins), and token dimwit Heather (Madison Siple).

The museum opens for the day, with Heather hosting the tourists through a re-telling of the Legend of Captain Z. The last group of the day is joined mid-tour by Professor Glen Stewart (Steve Rudinski), who knows a lot more about the legend than Heather does.

Turns out Professor Stewart is in town doing some research concerning the good captain, specifically searching for the artifact that will release the leviathan. Unknown to the professor, the artifact has already turned up in the home of a local poor family. Yes, they did read the ancient text on the back, and yes it opened the portal. Now the family is possessed by the demons who were so soundly defeated 300 years ago and are ready to try again. Led by Vepar (in a female body, played by Aleen Isley), they set out to  finally achieve their evil goal.

Cast note – the 1714 Vepar was played by David J. Fielding, who you might recognize as the voice of Zordon on the MIGHTY MORPHIN POWER RANGERS.

Fear not, because Captain Zacari has also returned, albeit a bit confused, to defend us once again from the terror of leviathan!

This was really fun. I mean, really fun. Yes it’s a low budget picture, and the CGI effects are crappy. but the practical effects are quite clever and not too bad. The acting runs the gamut from really awful to not bad. Mr Rudinski’s Professor is probably the best “David Tennant as Doctor Who” impression I have ever seen. I don’t know if that’s what he was going for, but it was all I could see.

Mr. Zilai as the Captain is very entertaining. I admit to not being a fan of his version of “pirate speak”, but that’s just me splitting hairs. Overall, he sells it pretty well.

Aleen Isley is simply brilliant as the demon trapped in the wrong body. The make up effects on her specifically are quite good.

Oh, and stay through the credits. Not only do you get to enjoy the music ballad “the adventures of Captain Z”, but there is a button at the end of the credits. Trust me…worth the wait.

So on a scale of one to ten, ten being awesome, I’m giving this film 7 artifacts.