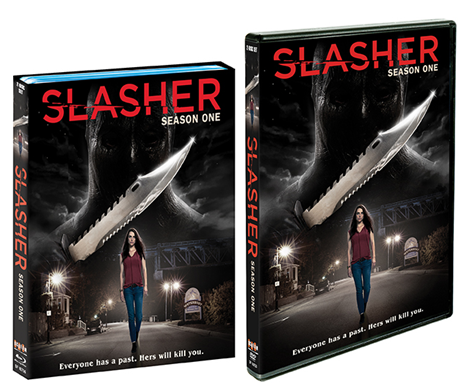 This summer, venture into the town of Waterbury with Sarah, a young woman who returns to where she was born, only to find herself the centerpiece in a series of horrifying copycat murders based on the grisly killings of her parents. As the murders escalate, long-buried secrets are revealed, making everyone around her a suspect…or a victim. The thrilling first season of Chiller’s original hit series SLASHER – which recently concluded its run on-air this Spring – stars Katie McGrath (Jurassic World, Dracula, Merlin), Brandon Jay McLaren (Chicago Fire, Graceland, The Killing), Steve Byers (The Man in the High Castle, Alphas, Smallville), Dean McDermott (Ecstasy, CSI) and Wendy Crewson (Saving Hope, Revenge).

On July 12, 2016, SCREAM FACTORY™ will release SLASHER: SEASON ONE on Blu-ray and DVD.  A must-have for horror enthusiasts, this eerily terrifying series features a generous dose of suspense and blood-curdling violence. Both the Blu-ray and DVD will include a behind-the-scenes featurette.

Synopsis: Thirty years ago, in the sleepy community of Waterbury, a killer known as “The Executioner” murdered Sarah Bennett’s parents. Now Sarah (Katie McGrath) and her husband Dylan (Brandon Jay McLaren) have returned to town, only to find herself the centerpiece in a series of horrifying murders centered around the seven deadly sins. It seems “The Executioner” is back. But if Tom Winston – the original Executioner – is behind bars, who is the new person behind the mask? As the murders escalate, long-buried secrets are revealed, making everyone around Sarah a suspect…or a victim.

Developed and produced by Shaftesbury in association with Super Channel and Chiller, Slasher is written and created by Aaron Martin (Killjoys, Being Erica) and directed by Craig David Wallace (Todd and the Book of Pure Evil). Aaron Martin, Christina Jennings and Scott Garvie are executive producers. Content Media Corporation is the distributor. Slasher is funded with the participation of the Northern Ontario Heritage Fund Corporation, the COGECO Program Development Fund, the Bell Fund, Music and Film in Motion/Federal Government of Canada, the Canadian Film or Video Production Tax Credit and the Ontario Film and Television Tax Credit.