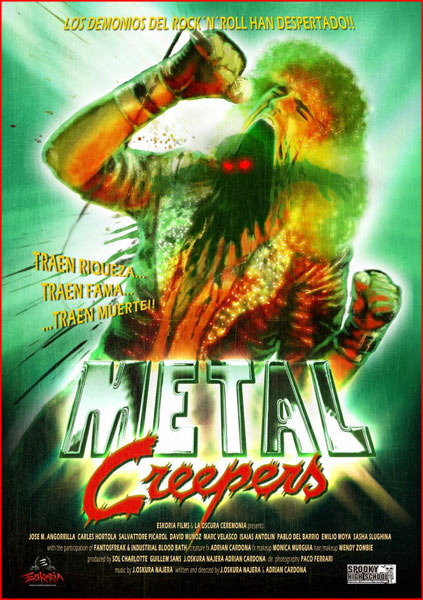 A popular glam metal band is in the recording studio preparing his next album. Its producer gives them some strange scores that are supposed to have magical powers.

Yet another short film, kiddies, and this one was a riot! Today we have METAL CREEPERS, a combined effort from Eskoria Films and La Oscura Ceremonia Productions. The film was written and directed by Adrian Cardona & J. Oskura Nájera. This film is in Spanish with English subtitles.

I’ve reviewed a few films from Mr. Cardona before, but this one is a bit different. I have commented that his other films seem timeless, not set in any particular time period. This film is firmly set in the 1980s glam-rock era and everything about it is dead on. The costuming, the score, the camera work, the lighting, even the special effects.  It looks just like it was made in that era. 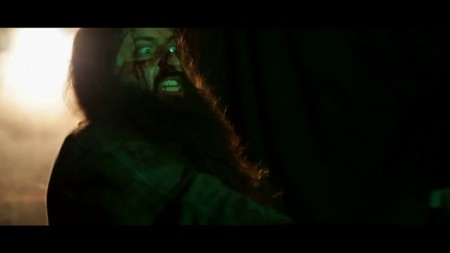 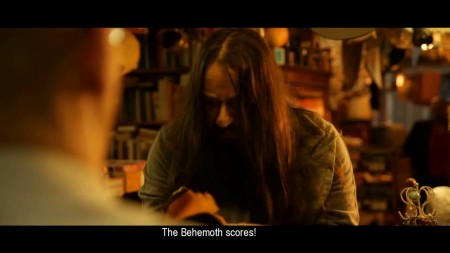 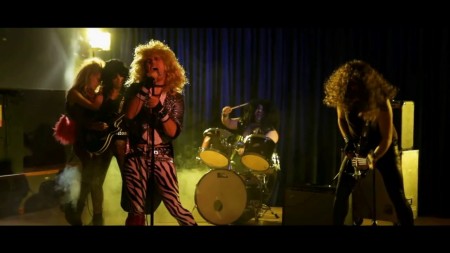 So what exactly is METAL CREEPERS? To put it simply, it’s an homage to the puppet-driven horror films of the 80s such as GREMLINS and CRITTERS. The special effects and puppets for this film were created by Mr. Cardona and Mr. Nájera, the puppets being operated mostly by the actors on screen. There is no skimping on the gore. Every effort was made to create these effects to emulate the look of the films they are honoring, and while those effects are very dated now, there is something to be said for the nostalgia.

This film is also a salute to what is best described as “Metalsploitation” films. Examples – ROCK AND ROLL NIGHTMARE starring Jon Mikl Thor , ROCK AND RULE, an animated dystopian musical featuring the voices of Robin Zander, Iggy pop, and Deborah Harry, and TRICK OR TREAT, which featured Ozzy Osbourne as an evangelical preacher.

in METAL CREEPERS, an unscrupulous record producer (J.M. Angorrilla) encounters a homeless man (Carles Hortola) as he is preparing to destroy a collection of hand written music he bought at a pawn shop. The collection is known as The Behemoth Scores, a series of music that is rumoured to open a portal to Hell itself if played. 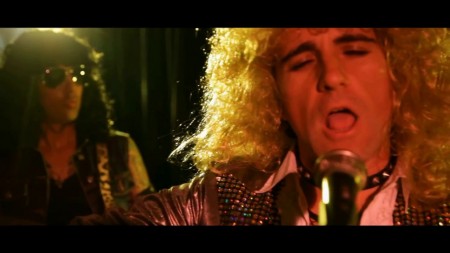 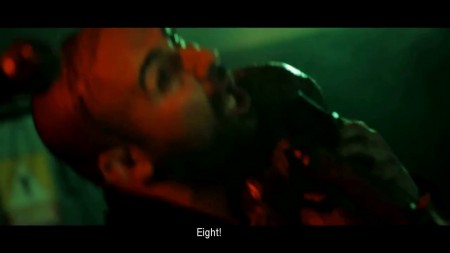 The producer is working with an up and coming glam band, and has become frustrated with their lackluster output. Being unscrupulous, he attacks the man and steals the music. He delivers the sheets to the recording studio and demands that his band record the songs immediately. So they do, and wanna guess what happens next?

There’s a great amount of trivia that goes with all this. This short was a teaser reel of sorts for a feature film called MEGAMUERTE. This short was used as part of the Indiegogo campaign to crowdfund production. MEGAMUERTE was ultimately completed and released in 2014, with most of the original cast reprising their roles.

The short premiered at the Sitges Film Festival in 2011 and has played several international festivals, including Tromadance, Weekend of Fear (Germany), and Fright Fest (London). La Oscura Ceremonia Productions, a collective of artists focused on the horror genre, organize the Zombie Walk at Sitges along with a few other festivals. La Oscura Ceremonia is also the record label for the band Eyaculación Post Mortem, from which Mr. Nájera comes to this production. Obviously, he is also responsible for all the music in this film. Some interesting stuff he’s got going on for other films as well. Take a trip to his website when you have time – laoscuraceremonia.wix.com/ejaculator

So using my special short scale of one to five, five being awesome, I’m giving this film 5 measures.