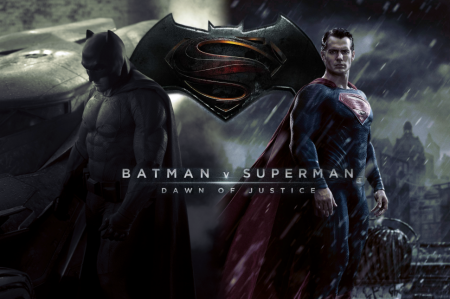 Fearing the actions of Superman are left unchecked, Batman takes on the man of steel, while the world wrestles with what kind of a hero it really needs. With Batman and Superman fighting each other, a new threat, Doomsday, is created by Lex Luthor to wreak havoc on the globe. It’s up to Superman and Batman to set aside their differences along with Wonder Woman to stop Lex Luthor and Doomsday from destroying Metropolis.

Cinematic history tells us that audiences love a good old slobberknocker, a fight between two foes that are beloved by millions upon millions of fans worldwide. Batman v. Superman: Dawn Of Justice is just the latest one to come down the pike. In the past we’ve had films like Frankenstein Meets The Wolfman (1943), King Kong Vs. Godzilla (1962), War Of The Gargantuas (1966), Destroy All Monsters (1969), Dracula Vs. Frankenstein (1971), Alien Vs. Predator (1993) and Freddy Vs. Jason (2003) are all examples of films that pitted two, or more, popular foes against each other. The best part of films like this (for the fans at least) is the eventual outcome, and the excitement leading up to that outcome. Can Kong defeat Godzilla, or will Big G send him back to Skull Island with a body covered in singed fur? Can Freddy slice & dice Jason into ribbons, or will Jason lop Fred’s head off with one smooth swing of his machete? Now, a few years after its announcement, what might just be the biggest fanboy query ever is finally on the big screen, and the eternal question will be answered:

Who’d win in a fight? Batman or Superman? 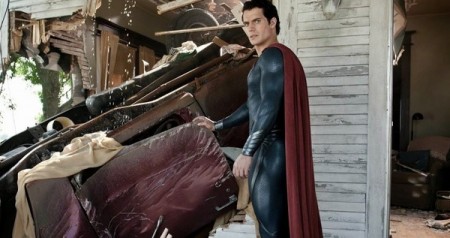 This is the question that director Zack Snyder and screenwriters Chris Terrio & David S. Goyer have been tasked to take to the big screen. And had they trusted themselves to tell what starts out as a pretty fascinating story, they might’ve had themselves one hell of a movie. But it’s all smothered by a special effects tsunami that literally washes away most of what works. 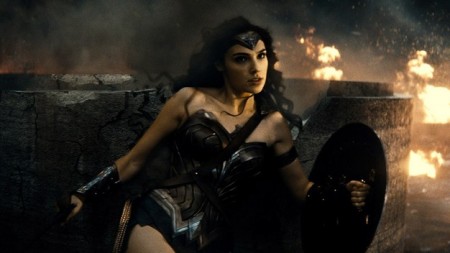 Aghast at the result of the battle between Superman/Clark Kent (Henry Cavill) and General Zod (Michael Shannon), Bruce Wayne/Batman (Ben Affleck) decides that Superman is a threat to mankind and must be summarily eliminated by any means necessary. The United States Government is also worried at Superman’s seeming omnipotence, and is holding sessions led by Senator Finch (Holly Hunter) to decide whether or not to label him as a menace to society. Meanwhile, Lex Luthor (Jesse Eisenberg) is formulating a plot to gather what little Kryptonite is available on earth in order to create a monster (Doomsday) to destroy Superman. And (as if things aren’t already way too complicated already), a beautiful, yet shadowy figure starts turning up at various soirees around town. This mystery female turns out to be Diana Prince aka Wonder Woman (Gal Gadot). Toss in some quick cameos from The Flash (Ezra Miller), Cyborg (Ray Fisher) and Aquaman (Jason Momoa), and what you get is one hell of a muddled mess of a movie. 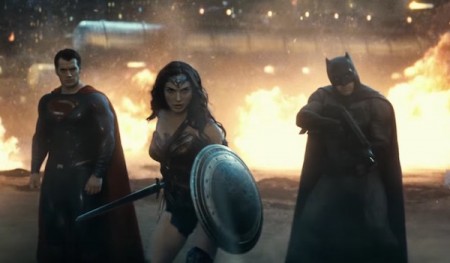 There’s so much that this movie gets wrong, that it’s near impossible to focus on anything else. But there are a few bits that make sitting through the bloated 150 minute running time less of a chore. First and foremost, Ben Affleck is one hell of a great Bruce Wayne/Batman He’s a bit older than all the previous cinematic caped crusaders and lends a world weary authority to the character, he also seethes with a palpable rage that’s kind of contagious. Gadot’s Wonder Woman is an imposing figure featuring impossibly long legs, and attitude to spare (The grin she flashes as she battles Doomsday is one of the best moments in the film). Additionally, Larry Fong’s cinematography is crisp & engaging, especially important since 90% of the film takes place at night.

That’s about it for the good stuff. Everything else in this film is crap. High falutin’ crap to be sure, but still crap. 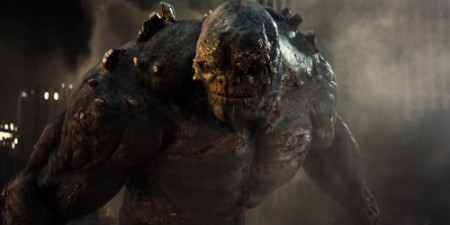 Henry Cavill is about as stiff as a Kryptonian surfboard as both Clark Kent and Superman. There’s absolutely no modulation to his performance here at all, he plays both roles as dour and joylessly as possible. Jesse Eisenberg plays Luthor as if he was a twitchy, high toned little girl with issues of repressed homosexuality that he’s yet to deal with. Amy Adams tries her best as Lois Lane, but the execrable and near incoherent at times script (by Chris Terrio & David S. Goyer) makes Lois little more than a victim for the most part. The score (by Hans Zimmer & Junkie XL) is both overwrought and damned annoying throughout the film. Director Zack Snyder doesn’t direct this mess, he merely acts as a traffic cop, guiding traffic and making sure he doesn’t knocked over. There are moments of pure insanity in this film during which I hadda marvel at how wrongheaded it all was, and in all honesty I have to give the film makers some credit here. It’s not often when I’m watching a movie during which it’s as plain as the nose on my face that the film makers were just throwing stuff against a wall hoping something will stick and still be relatively entertained by it all. 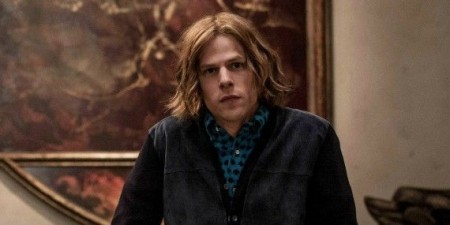 DC/Warner Bros know that they lag far behind Marvel in terms of their cinematic universes and where they stand right now, but in an effort to play catch up they spent a quarter of a billion dollars and toss in everything they could possibly think of to stake their claim in the clash of superhero movies. What they fail to understand is that Marvel has slowly and methodically built up their various film franchises over the past decade or so. And they put real thought and effort in making them both believable and relatable to their audience, all of their pieces fit very nicely. DC/Warner Bros just put everything into a blender at once and hoped for the best. Hardly the best way to embark on the schedule of superhero films they’ve announced for the next few years. Yet for all of the bloated, big budgeted insipidness on display here – I can’t say that I hated this film. It’s so f**king bat shit, back assward crazy that I have to admire it in a way. I’m not kidding when I say that there are moments during which I had no idea what was going on, but when it was all said and done, I can’t say I minded them all that much.

Batman v. Superman: Dawn Of Justice is a trainwreck of epic proportions, one that’ll go down in history for being as wacky as it is. But it is weirdly entertaining, and it’s human nature to be fascinated by trainwrecks, isn’t it? It’s not a good movie at all, but it sure ain’t dull.