A New England couple on their way out west to start new jobs and a new life find themselves caught up in an extraordinary game of deadly cat-and-mouse. 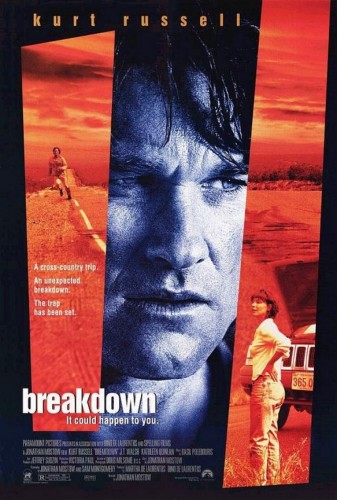 In 1997 a friend of mine and I went to see a film that I no longer recall and one of the trailers that we saw was for Jonathan Mostow’s Breakdown, a film with Kurt Russell and Kathleen Quinlan, two performers I have always liked and respected. I groaned – this film looked like just another run-of-the-mill, headache-inducing, over-the-top Jerry Bruckheimer action-fest with absolutely no basis in reality. Foolishly, I avoided this film until I found myself at the Glendale 9 Drive-In in Arizona. Breakdown was just about the only movie on the list that looked remotely interesting, though I had sincere doubts. Reluctantly, I paid admission, fearing the worst.

I could not have been more wrong about this film.  My initial reservations were completely erased halfway through. Years of watching ludicrous testosterone-driven action epics with amusement park-like thrills almost prevented me from seeing one of the best films of the 1990’s. I watched the film from the hood of my rental car. I thought the paint would permanently adhere to my sweaty palms.  I don’t know why Breakdown got under my skin to the extent that it did, but I suppose it had a lot to do with Kurt Russell’s compelling performance as an Every Man who is thrown into a terrifying situation.

Breakdown is a masterful thriller. To disclose the plot would destroy a nail-biting motion picture experience. In fact, be warned, as the film is almost too gripping to be enjoyable. There is such an overwhelming sense of menace and peril in this film that it almost becomes a cruel experiment in fear.  For a first-time directing job by Jonathan Mostow, it’s awe-inspiring. The opening credits sequence alone is imaginative and appropriate to the story. It has been a longtime indeed since this level of suspense has seen the light of day on the silver screen. It’s so good, in fact, that it’s hard to believe that it ever got made. Amazing that it was not the blockbuster that it deserved to be.

Shooting in the 2.35:1 Panavision ratio, Mr. Mostow has created a highly plausible scenario replete with three of the most frightening villians the movies have ever seen. They certainly give Bill McKinney and Herbert “Cowboy” Coward, the mountain men in Deliverance (1972), a run for their money. J. T. Walsh, who unfortunately passed away not too long after this film was released (his death is a real loss to the film world), appears in one of the best performances of his career: a purely evil man who doubles as an everyday Joe who loves his wife and son but commits terrible acts for money. M. C. Gainey, a towering giant who could rip you in half with his own two hands, is brilliant as Earl, one of the conspirators. You would not want to cross him. Jack Noseworthy is equally maniacal as the third villain.

Breakdown succeeds for the same reason that Steven Spielberg’s Duel does (though Duel is more cinematic): it takes two ordinary human beings and thrusts them into a horrendous situation they’d never have any reason to suspect they’d ever be a part of. That is not to say that the film does not have a few convenient plot devices, but even when it does they can be forgiven.

Kurt Russell – my God, he’s just brilliant. I loved him as Snake Plissken in Escape From New York (1981). He’s such an amazing actor. The look of terror and fear on his face is complete and real. The late Basil Poledouris, who scored Conan the Barbarian, one of the best scores of the 1980’s, provides a tremendous score to this film. The tension in the sequence prior to the unbelievably tense and superbly edited ending is made all the more so due to his phenomenal score.  The score was released as a limited edition three-CD set in June 2011 by La-La Land Records and you can find it on Amazon here.

Although I have a slight problem with the ending (it contains a few elements that are farfetched), it still remains one of the most gripping action sequences your likely to see in any film.

I cannot say enough about this film. It’s completely riveting from start to finish, and is one of only a handful of 1990’s films that I can watch over and over again. The film was one of the first titles released on DVD so consequently it is only available in a movie-only edition, and lacks anamorphic enhancement.  The DVD looks and sounds great, though the lack of anamorphic enhancement is disappointing. Hopefully, Paramount will re-issue this title soon with a commentary by the director. Recall that DVDs were fairly new when this film was released. This film is far superior to Mr. Mostow’s submarine film U-571. I’d love to hear his thoughts on the casting and comments on the making of the film.

One major warning: Do not watch this film on television. It’s been on TV several times, and it’s completely ruined. Commercials cause this film to break down (sorry – couldn’t resist).  It is floating around on the torrent sites in high definition, and could very well be available on Netflix streaming in high def.