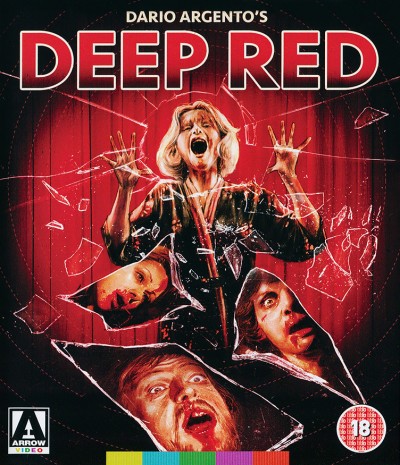 A pianist witnesses a graphic murder and takes it upon himself to find the killer.

Deep Red is the American title of a film directed by Dario Argento.  Known worldwide under myriad titles such as Profondo Rosso, Deep Red The Hatchet Murders, and Les Frissons De L’Angoisse, it is often spoken of in the same breathe as the director’s own Tenebre when discussions arise regarding Mr. Argento’s best work.  Deep Red has been available in several different versions on home video, and even made the rounds on broadcast television during the late 1980’s.

Shot between September and December 1974 in Rome and Turin, the film did not reach American shores until it was released on Wednesday, June 9, 1976.  At this time, studios actually gave you something for you money other than commercials for soft drinks prior to the start of the feature film.  Free handouts for Deep Red’s engagement included not only a bag? But a free 45-RPM of the Goblin theme!

The late great British actor David Hemmings stars as Marcus Daly in a role obviously inspired by his turn as the photographer in Michelangelo Antonioni’s revered Blow-Up (1966).  He’s a jazz pianist who is walking home late one night and witnesses the brutal murder of his neighbor, psychic Helga Ulmann (Macha Meril).  He runs to her apartment in the hopes of helping her, but is too late.  After the police arrive, Marcus has the distinct feeling that something has been changed or rearranged in the apartment.  This notion provides the basis for a very interesting puzzle that Marcus sets out to solve with the unsolicited help of newspaper reporter Gianni Brezzi (Daria Nicolodi).  Through a series of threads and clues, Marc is lead to an enormous abandoned house that holds the key to the crime he witnessed. 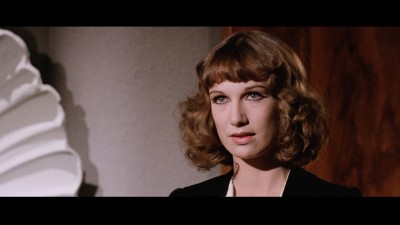 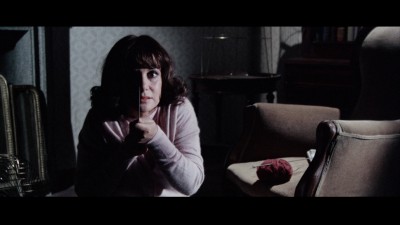 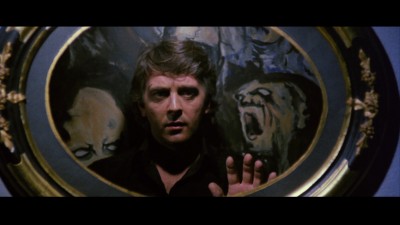 Deep Red has left a lasting impression on audiences with its breathtaking cinematic style, unorthodox marriage of quasi-jazz/rock music that was potent enough to inspire John Carpenter’s Halloween theme, and extensive use of a large old house as part of the film’s mise-en-scene.  Coming on the heels of Mr. Argento’s phenomenal debut film The Bird with the Crystal Plumage (1970), his interesting The Cat O’Nine Tails (1971), the overlong and meandering Four Flies on Grey Velvet (1972) and his comedic The Five Days of Milan (1975), Deep Red announced the arrival of what most of us think of as a Dario Argento film. 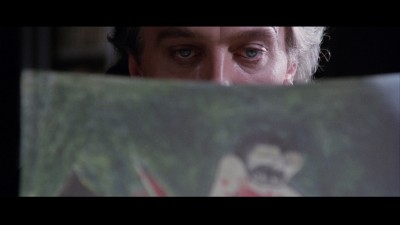 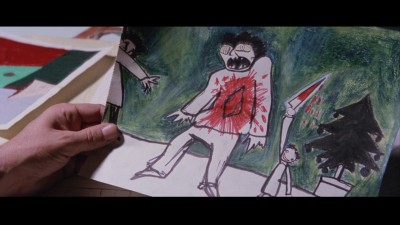 While his first three films bore the name of a particular type of animal in their titles, the basic similarity holding them together was the employment of a regular Everyman as their protagonist-turned-amateur sleuth attempting to solve the puzzle of a murder victim’s death.  Deep Red raised the bar by showcasing a series of firsts for the director: it was the first time that he utilized the considerable talents of Goblin, the Italian rock group whose musical score elevates the film into the stratosphere, and Daria Nicolodi, his long-time girlfriend, appeared in her first role for him. She was also a story and script collaborator on his films until 1987. Ms. Nicolodi’s performance and her unique ability to bounce off of her leading man is one of the film’s greatest assets. Their comedic banter is a pleasant counterpoint to the mayhem at hand. While the Italian cut contains additional, non-essential exposition of a similar nature, in addition to an alternate opening, the American version is the preferable cut as it is more polished.  Longer is not always better, as is the case with Deep Red.

The film was unfairly dismissed by the New York Times as “a bucket of ax-murder clichés.” I would be interested to know what version of the film played theatrically here.  If it was anything like the 100-minute mess released by Thorn/EMI Home Video in the mid-1980’s, it is difficult to follow, and my sympathies to the late Vincent Canby.  Mr. Argento has never received much respect here in the U.S., and in the early days of home video before the public was given access to the Internet, aficionados of his vision were forced to scour independent video stores in Italian neighborhoods to locate uncut bootleg versions of his films, which were usually in Italian with no English subtitles.  Now, thanks to the fine folks at Arrow Video in the UK, you can have as much Deep Red as you can handle since the new Blu-ray disc possesses is mastered from a 4K restoration of both the 105-minute American cut as well as the 126-minute Italian language cut. Viewers have the opportunity to choose which version they would rather see, and my preference is for the 105-minute version (which is better than the 100-minute cut). Diehard Argento fans will no doubt want to watch both versions, which are considerably different. Like Inferno, the film has never looked better on home video. Reds are, well, deep, and blues are strong and bright, and flesh tones are accurate.

Arrow Video continues its amazing release schedule with this new pressing of the film on Region B Blu-ray.  If you live in the United States, you will require the use of a multi-region Blu-ray player, or a computer with software that will enable you to watch it.

The three-disc, now out-of-print edition (you can find it on eBay) consists of:

Needless to say, the film has never looked better.  I personally prefer the shorter, American cut over the more long-winded Italian cut.  This Blu-ray is a must-have for the transfer alone. Here is hoping that the forthcoming Blu-ray’s of Suspiria and Phenomena are handled with similar care.