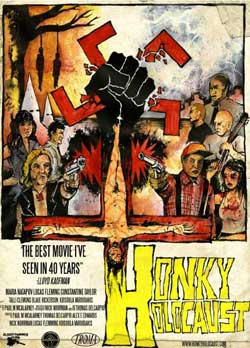 A few times each century, humanity dodges an apocalyptic bullet and in 1969 that bullet was Charles Manson. But in Honky Holocaust’s alternate universe, the Manson Family succeeds in igniting the apocalyptic race war and attempt to claim their ‘rightful’ place as the rulers of the world. The infamous cult instead finds that the outcome of Helter Skelter is drastically different than was prophesied and are forced to confront their perversely racist background or perish defending it!

Racial tensions have always been a big issue in history.  From the slavery to genocide, there has never been a time in which people didn’t treat people of other races as inferior.  In recent times, the American incidents of racial tension like those in Ferguson, Missouri reminded us that racism is still present in our everyday lives.  Some filmmakers like to use their movies to say something about these issues. 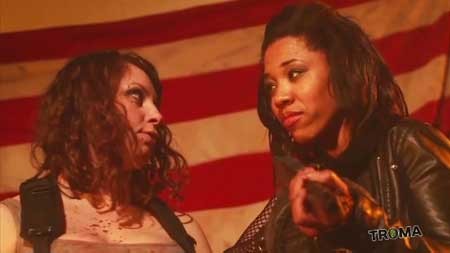 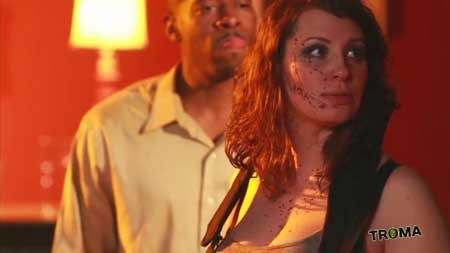 Honky Holocaust was picked up and distributed by Troma in early 2016.  It was set in an alternate reality where Charles Manson (Thomas Delcarpio) managed to incite a race war before disappearing underground for thirty years.  When his daughter Kendra (Maria Natapov) and the survivors of Manson’s underground community resurfaced, they discovered a world where black people were in charge and white people were treated like animals.  The cult leader Dan (Lucas Fleming), chosen by Manson before his death, planned to put white people back on top through massive amounts of violence.

The twist that writer/director Paul M. McAlarney put on racism is one that should be able to get through to anyone.  It was so blunt and obvious that it would be nearly impossible to ignore.  The world in which these characters resided was a reverse of that which we know from before the civil rights movement.  The city of San Francisco was segregated, with black people living a life of luxury, while white people lived in a rundown ghetto.  There was meaning behind each of the choices made while building this alternate world.  This movie was meant to, in an over-the-top and offensive way, hammer into the heads of white people how horrible it is that people are treated in this way.  It is a good message that, though always at the front of the action, could be ignored because of what surrounded it. 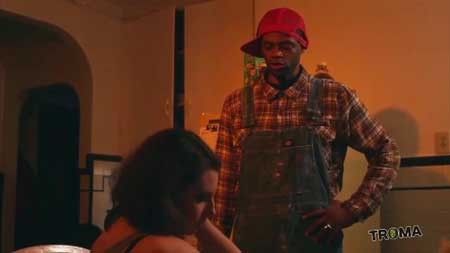 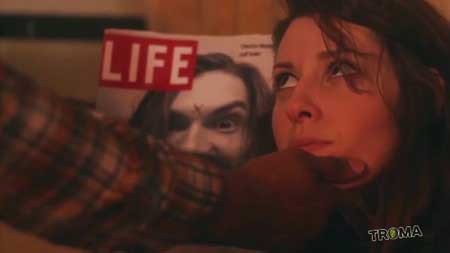 Honky Holocaust was filled with sex, violence, and racial slurs.  This graphic material started early with Charles Manson and his followers participating in full frontal skinny dipping, then heading underground to create a society based on raping women for reproduction.  One image that will stick with any viewer is a giant glob of maggots pouring out of a vagina.  Casual viewers will likely turn the movie off during any of this stuff and miss the message that the movie put forward.  The excessive violence managed to service the story by heightening the tension between races.  This showcased the struggle with racism that society is going through.  The message is still there.  It was just buried under people getting shot in the butthole and penises flying across the screen. 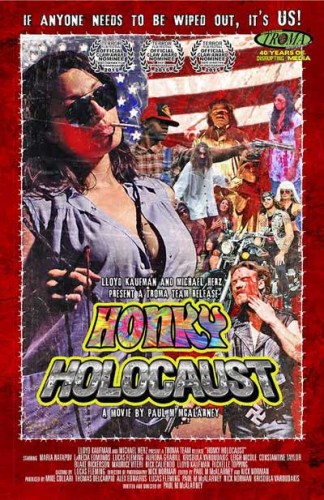 For the exploitation feel that the movie was going for, all of the actors brought their game.  Nobody turned in a performance too good for the style.  Lucas Fleming played Dan as a character right out of 1970s gang movies.  His performance was a highlight and a testament of how well thought out the exploitation style was.  Maria Natapov turned in a solid performance as the heroine of Honky Holocaust.  She played the sheltered initial version of her character to perfection, and she was almost as good playing the gun-toting badass that Kendra became.  Her only fault was that when she was yelling at people who doubted her, she went too far.  She practically monologued through yelling and her voice couldn’t take it.  The supporting performances throughout were a good foundation to the movie and helped flesh out the exploitation world in which it was set. 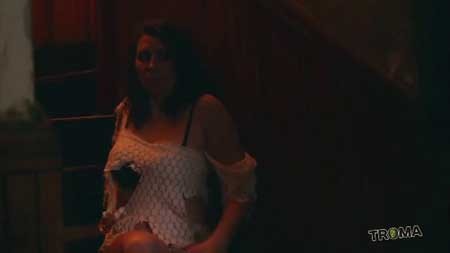 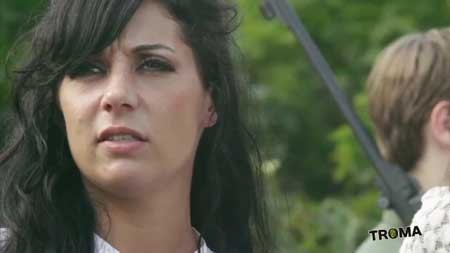 Not everybody is going to like Honky Holocaust.  The violence is going to be too much for some people.  Other people won’t be able to take the excessive nudity and sexual material that is littered throughout.  And more people will be too offended by the racial material that is portrayed in such an extreme way.  The message behind the movie is a good one to get across to audiences.  The way I was handled was one of the more interesting and fun ways that could have been chosen.  Honky Holocaust is not a movie that was made for everyone.  If you can handle this kind of material, however, it is an entertaining criticism on the underlying racism that still surfaces throughout society.  That is worth the watch.