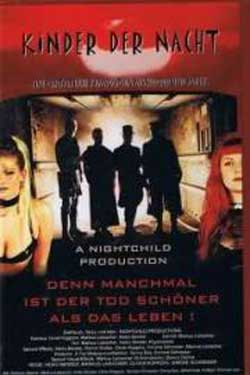 The first Nightchild production unites the Spirit of Dark Wave scene with those of modern horror and splatter film and sends the audience on a roller coaster ride of horror in the style of an audiovisual clips.

Kinder der Nacht (translated, Children of the Night) is the directorial debut of Heiko Bender, a regular in the films of Andreas Bethmann (according to the film’s credits, this is a split effort, co-written and co-directed by Bender, Oliver Kuppers, Markus Laibacher, and Simone Schneider, aka A. Simona when she directs her XXX horror films). Not surprisingly, all four of the creators also play fairly important characters in the low-budget film. Kinder der Nacht fits right in with the German splatter films of the early 2000s, not only in look and feel, but also in lack of English subtitles, so bear with me as we move forward here. 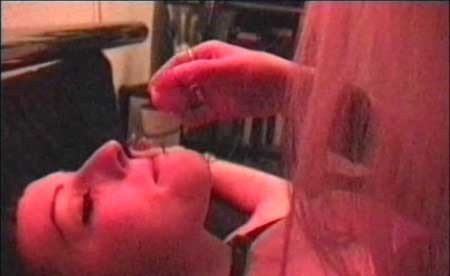 It’s really tough to discern the exact plot of this film without understanding the dialogue (or the two minute info-dump at the beginning of the film). We seem to have rival groups of people here, one side looking like heavy metal dudes, the other more goth rockers. A couple of the goths (Tequila, played by Bender, and Mason, played by Andreas Washer) find an old box in an abandoned house before they are run off by a demonic voice and bizarre images. After making their way through some Evil Dead-style trees, they find safety near friends and browse through the box. 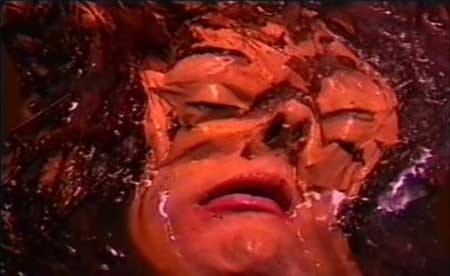 One of them, Psycho (co-director Laibacher), snorts some drugs off a paper from inside the box, and he goes a little crazy. The drugs have increasingly powerful effects on all people who take them, including the rival metal dudes, and tensions build between the two groups before exploding and bringing along the final act, which gets weirder. Throw in some rave shots, some cute goth girls kissing, lots of fights, and a handful of demonic possessions and gore, and you’ve pretty much got a succinct summary of Kinder der Nacht. 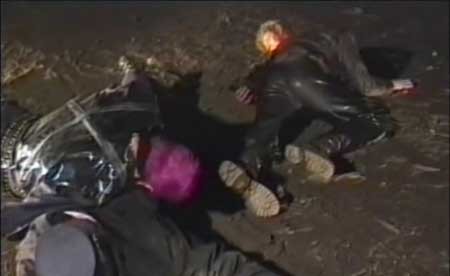 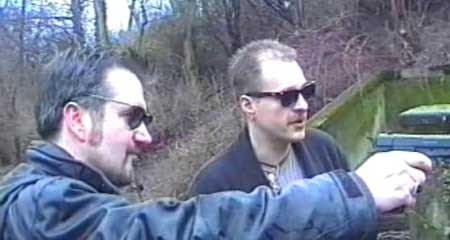 Let me say right now, there are some really cool ideas in this movie. The opening scene shows a young boy walk into an old house – the same house we see later on. Weird stuff starts happening; a doll’s head turns toward him, candles light themselves, blood drips all around the room, and a corpse emerges from a pool of blood, catches on fire, and scares the crap out of the kid before presumably killing him as he tries to escape. Now, the effects aren’t perfect, and it is very obvious the budget here is very low, but this concept is intriguing. Unfortunately, we only barely revisit the house as we move forward, so that element, that idea, is short-lived. But bring in the drug-influenced ghosts and demons, and get to have some more fun with the filmmakers, even if we can’t understand what they are saying. 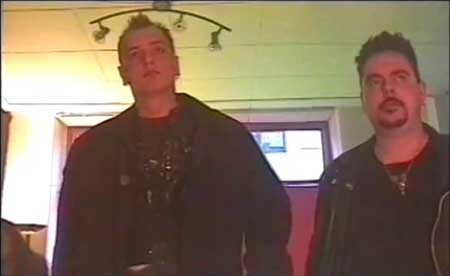 There are, however, some big problem areas in Kinder der Nacht as well. This film is very dated. The long black trenchcoats, the leather jackets, the posters on the walls (such as the Crow, Robert Smith of the Cure, and Star Trek: The Next Generation). It’s hard to watch this movie without having constant reminders of early 2000s pop culture, and that ends up a little distracting. But that’s a minor problem, really, an annoyance at worst. Even bigger is that this movie carries a 122-minute runtime. That’s over two hours, which wouldn’t be a criticism if it didn’t feel like there was so much filler in here. So many scenes could have been cut down, some scenes seemed completely unnecessary to the story and could have been cut out altogether. Removing anywhere between twenty to thirty-five minutes of this movie would make it flow more smoothly and make the fight scenes and splatter effects stand out all the more.

Kinder der Nacht is a movie that hardcore fans of German horror/splatter will want to check out. It drags at times, and it’s too long, and without English subtitles it is confusing, but also keep in mind that this is the director’s first film (all four of them), and a very low budget one at that. 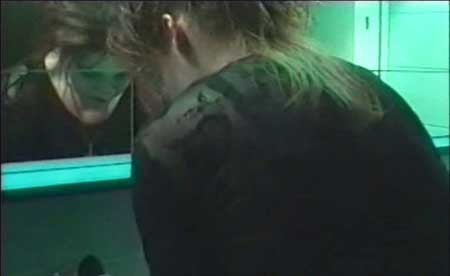 There are hints of a sequel at the end, and that would serve as a great test to see what the filmmakers learned from the initial effort and how they can apply it to the next film. Then again, it’s been sixteen years and, as far as I can see, still no part two. Good thing there’s plenty of other splatter-filled German horror to check out while we wait.