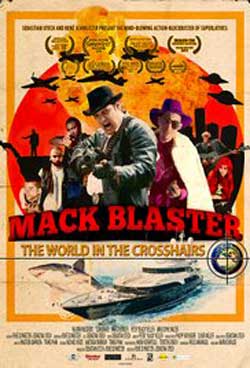 yet more short films for you, kids! This one makes me really happy.

Today we have MACK BLASTER: THE WORLD IN THE CROSSHAIRS (Mack Blaster – Die Welt im Fadenkreuz), written and directed by René Schweitzer and starring Wladimir Meckovic as the eponymous hero. 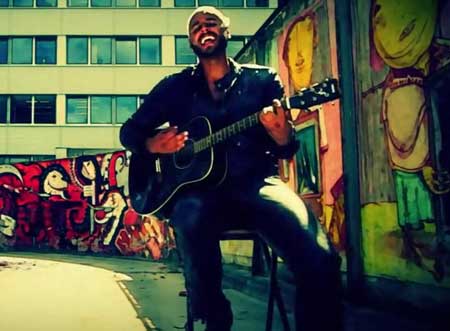 First of all, the film is in German language, but my copy has no subtitles. I think it is not subtitled on purpose, so most likely no copies have subtitles. That was kind of a hassle, but honestly…the story is pretty easy to follow. Hell, I watch anime in Japanese all the time but I have no trouble keeping up with the story. So keep that in mind when you see this film.

Also, it should be mentioned that this film is an official selection of 23 film festivals, including Tromadance, Dragon Con, Shriekfest, and Horror-on-Sea. This film has made the rounds and obviously pleased the crowds and judges. Keep that in mind as well.

Our story follows Mack Blaster as he travels across the post-apocalyptic remains of civilization in pursuit of a bounty. His target is Ringo “Der Schlächter” Mack Man (Slim Garbi), whom I spent the film referring to as “The Pimp of Doom”. Mack slaughters his way through desert landscapes and seedy bars to find his prey, leading to a most bloody showdown.

There is so much to love about this film. It took me less than three minutes to decide I loved it. It feels a bit like a live action cartoon. It is shot in high saturation using a tri-band technicolor pallet, which makes everything look very surreal. The over abundance of blood makes me beyond happy. And the costume and make up design are so much fun, I can’t even come up with a sufficient descriptive phrase.

The various characters Mack Blaster encounters in his search for The Pimp of Doom are brilliant as well. I specifically want to point out a bartender in one scene that does the best German language Peter Lorre impression I have ever seen. Not that I’ve seen many of those, but this sets the bar for the future.

I would also like to make mention of a character known as “Der Barde”, played by Peter “Black” Keller. I won’t tell you why. Just see the film and you’ll understand.

This is a love song to many genre films, including the work of Sergio Leone, blacksploitation films, and grindhouse horror. There are so many deep geek references to other films that it will take a few viewings to catch them all.

Love it. A Lot. Brilliant.

So using my special “short scale” of one to five, five being awesome, I’m giving this film five bullets.