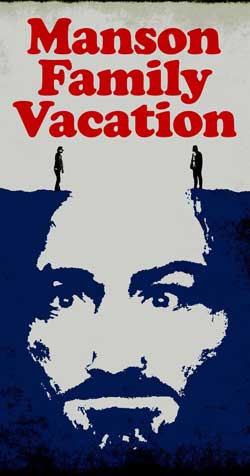 Nick and Conrad are brothers but they are as different as night and day. Nick is a hard-working family man while Conrad as an oddball slacker obsessed with the Manson Family. When Conrad pays him a visit he talks him into going on a road trip to see many of the locations associated with Manson. Then things start to get weird.

One of the many things that gets on my nerves (and believe me there are many) is the people who claim to admire-and in some cases even love-Charles Manson simply because they are desperate for attention and want to freak other people out (quit trying so hard, damn it!) so I went into Manson Family Vacation with pretty low expectations. I’m glad I did because I just wasn’t that impressed with it and didn’t have a very good time watching it. I thought that it was quite boring, monotonous, moved way too slow, and nothing worth mentioning ever actually happened as the movie progressed. While I wouldn’t say that I hated it I wasn’t a fan of it at the same time and thought that it was pretty forgettable more than anything else.

To be honest I’m not exactly sure what it is supposed to be (and I don’t think the people responsible for it really knew either). Is it supposed to be a horror film? A character piece? A dark comedy? I don’t have a clue after watching it but if I had to describe it I would say that it came off more like a bland drama more than anything else. It wasn’t funny or scary or even that interesting to be brutally honest. I was pretty bored while I was watching it and was just desperate for something-for anything-to happen that would spice things up but sadly it just didn’t happen. I was able to make it through to the end but there was never any real payoff (aside from a pretty lame twist that I saw coming very early on) before the end credits started to roll.

The biggest majority of the film is made up of basically the same scene over and over again. The brothers sit around talking about how Nick feels bad about how Conrad was mistreated by their parents growing up (it turns out he was adopted before Nick was born), Conrad goes on and on about his obsession with Manson and then they bicker about the fact that Conrad is sort of a loser with no goals in life. Repeat several times for nearly 90 minutes and that is basically this movie. There are a few scenes thrown into the mix that involve Nick’s wife and son (who is more than a little weird himself) but none of them really add anything to the overall plot and they just feel out of place and forced (I think that these scenes were just put in to break up the monotony of seeing Nick and Conrad bicker). Unless you enjoy seeing essentially the same scene play out over and over again you will most likely want to skip this movie.

I also thought that the twist toward the end was very predictable (not to mention borderline impossible depending on when the movie is supposed to take place). I saw it coming a mile away and wasn’t too shocked or surprised by it in any way. If you pay any sort of attention to the first part of the movie you will figure it out rather quickly as well as it is pretty obvious in my opinion. I’m not going to give anything away because I don’t want to spoil it for anyone interested in watching it but I think many viewers will see it coming very quickly (Hell, I think that many people can figure it out just by reading this review and never actually seeing the movie as it is that obvious). I like twists in movies as long as they work and don’t seem forced, but unfortunately that just wasn’t the case this time around.

On the flip side I did think that the acting in the film was pretty good and I didn’t have a problem with anyone’s performance. Jay Duplass is great as the straight-laced, borderline yuppie Nick and came off as quite believable (I know several people just like him as a matter of fact). The same could be said for Linas Phillips as Conrad as I really thought that he delivered. It is apparent that he put a lot of heart and effort into the role and even though there is something definitely off about the character I couldn’t help but like him. There is something childlike about him (despite the fact that he has such a morbid obsession with everything Manson) and he comes off like just a big kid at times due to the fact that he gets so excited when he is talking about his idol that you almost feel compelled to like him. Without a doubt both Duplass and Phillips did a great job of bringing their respective characters to life and I thought their acting was the biggest strength of the movie (Oh, and Tobin Bell from the Saw films shows up for a little bit toward the end and even though he does a good job as usual his character is sort of pointless). 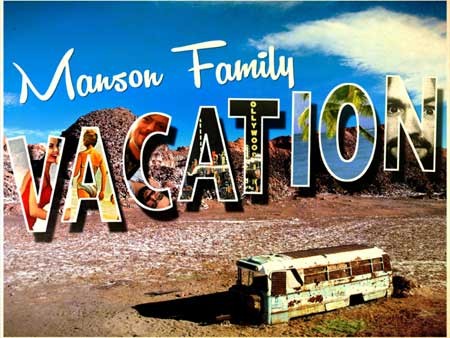 While I wouldn’t say that it was a terrible movie Manson Family Vacation (is it just me or is that a really goofy title?) just wasn’t for me. I found it to be more than a little boring and it just didn’t appeal to me. There are a ton of movies that reference the Manson Family and I just didn’t feel that this one really brought anything new to the table that makes it stand out among all the rest. Just because I wasn’t into it doesn’t mean that you won’t like it so check it out if it sounds like something that you might be into. Just make sure that you keep your expectations in check.