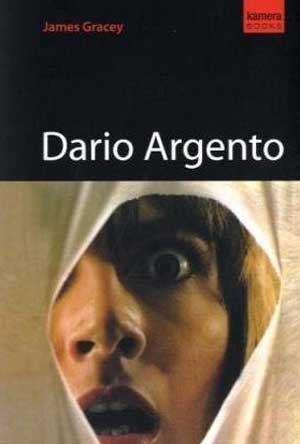 Dario Argento is one of those obscure but influential directors who has not only contributed greatly to the genre but has inspired countless others in his works. It’s funny because with his volume of work, sometimes I still get the impression that he is not as visible to most horror fans as he should be. Over the years, the ones who regard him as an inspiration not only cite him as an inspiration but as a major reason for their style of movie making. His body of work is impressive but because alot of his films took awhile to get ported to the US distribution, his work is somewhat lesser known in the states than it should be. Even today we find new releases of his former titles from years back.

There’s is no arguing the impact his film “Suspiria” had on horror fans and horror filmmakers but due to his newer works sometimes superceding his older works, the horror community has a fragmented impression of his style. The book titled Dario Argento authored by James Gracey approaches this fact and the works of this horror master with care, concern and admiration. It’s explained in his beginnings and his earlier works that really invented a style he could call his own. Often described as poetic, harrowing, suspenseful and gory, Dario tackles a real horror lover approach to his films.

Not being content to repeat himself, he tries new things that either excel or fail to the wayside but regardless they all contain his touch of originality. The back cover of the book lists his volume of works. The book goes on further to do a critical analysis of each and its style. What I liked though about the author’s writing was that he didn’t get too far gone in philosophical speak so that the analysis are kept still within a consumer understanding. In other words, it wasn’t boring to read.

Darios’ relationship with his daughter Asia and his former wife are also examined which have also been largely a point of slight controversy. His daughter Asia who has appeared in a few of his films but has had to undergo rapes scenes, murder, nudity and torture. Not the likely choice of a father / daughter film collaboration, but then Dario is in a class of his own. A strong horror contributor to the Italian Giallo film style, Dario weaves in and out of unique camera approaches to his works. The film Suspiria with its vivid colors, multi film transfers and almost hallucinating atmosphere is still talked about in film circles today. New pieces continue to weigh firmly under the critic eye who often compare his earlier works to his new experiments today.

Masters of Horror delivered us 2 Dario pieces that also stand as shocking, brutal and highly unique. Jenifer with its sensual and disgusting mixing in ways that work for the screen and “Pelts” with its extremely violent scenes too strong for network TV. All in all this book provides a roadmap for fans to embark on. If you are only a Dario dabbler, then you might find great satisfaction in his earlier mentioned works thru online venues. A few of his titles have re-surfaced with new packaging and releases. Do you yourself a favor, pick up this book, and let it guide you into the realms of an Italian Horror master. I know I will!