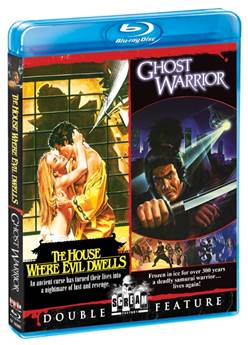 A young American family moves to a House in Kyoto, Japan. It turns out to be haunted by the ghosts of a woman and her lover, who were killed by the woman’s husband, as well as the ghost of the husband, who killed himself afterward.

Oh dear, where to start. Premise wise this one should have offered us some real scares and thrills. Since most of it is very similar to the story from The Grudge (the remake that is). Well, partly. But don’t get your hopes up because the evil isn’t strong in this one. The House Where Evil Dwells is about an American family coming to live in a house that is haunted. Of course like always in films like these they don’t take this seriously and are happy to live in such a beautiful place. Especially when they hear it is super cheap. Who wouldn’t be swayed by that?

So what if a few ghosts try to spook you? Nothing we can handle, right? To be honest I personally would be very sceptic and paranoid about living in an old place with a rich history.  At the same time though many bad things have happened in many houses around the world. You would not be able to live anywhere if superstition would get the upper hand. Sometimes you just have to be practical. Thing is that in this case we know that something bad happened in the house. Because it is shown to us in the introductory scene. 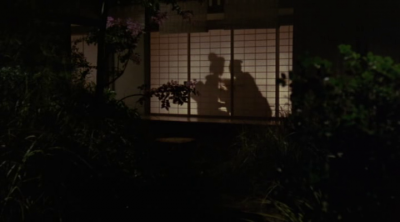 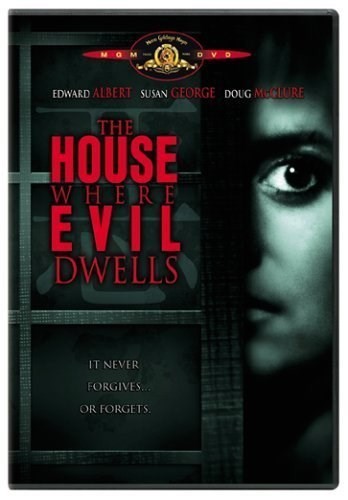 It is a rather odd decision to tell the audience in advance what the background story is of the haunting. For me this usually is the most interesting aspect and the scares that come with it I treat like a bonus. And unfortunately  it ruins most of the viewing experience. Not knowing and not seeing is infinitely more scary since then you can run your imagination wild. Here most of the events are spelled out to you in such a laughable manner (referring to the “there is an awful face in my soup”) that it becomes hard to take anything seriously. What is worse that even the remainder of the questions that one might have get answered. If you could be bothered to listen to what the Zen monk has to say about the house and the ghosts. This monk BTW very happily offers himself to exorcise the ghosts. Although the Fletcher family might have been better off calling the ghostbusters for this job.

I know what you are thinking. All of this sounds bad. Real bad. And yes, I can’t deny that it did take some energy to keep watching. However there are some redeeming factors though that could make it worth your while. The intro scene while taking forever does show some intense stuff. Nudity, sex and some sword action. Seeing how The House Where Evil Dwells feels like one of those TV movies  where you can’t show too much skin and violence they managed to do surprisingly well. Actually a lot of the simulated sex scenes are done with a sincerity by the actors (including the sexy Susan George) that could be seen as erotic and hot. There are two reasons for this.

Despite some silliness  the cast take everything very seriously. You have to admire such a dedication and work ethic to the material given. Secondly we are shown that the characters aren’t always in control of their actions. I am not sure if it was implied or not but it could be that at very pivotal moments some characters are fully in control.  (Granted this is my take on it since it does make things so much more interesting and revolting.) If you look at it from my viewpoint you will notice that it adds a tension that for some could be perceived as horrific. You will know what I am talking about if you dare to watch the movie. One other scene that stands out is probably one of the weirdest and freakiest scenes in film history.  Not because it is that terrifying (although with the right amount of imagination it could be completely). But it is a scene that is so highly original and surprising that it does make you wonder how anyone could have thought up something like that. Like Jim Morrison sang: “People are strange”. I can second that for sure.

Last but not least the conclusion. It ends rather daringly as it is quite ruthless and unforgiving. It’s a real shame that this film has too  many scenes that reveal far too much too early. If I were the director I would have left out the opening scene entirely and would have shown things far more subtly or not at all.  Like I said previously not knowing and not seeing is scarier. Normally I am against remakes and reboots. But if there ever was one that deserved one it’s this movie. The premise is interesting and intriguing and a whole lot more could have been done with it. Now to the question if I think this movie is worth seeing?  That is not that easy to answer. If you expect to be scared then no this is not going to do it for you. If anything for the most part you will laugh real loud at how poorly some scenes are done. If you are curious however of the scary movie that could have been then yes by all means watch this. This films also deserves some credit for the fact that they put a bunch of Americans in a Japanese haunted house in 1982, 22 years before The Grudge (2004) did. 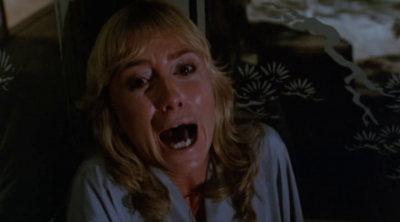 So come on Sam Raimi, this film could use some of your movie magic. Go for it!