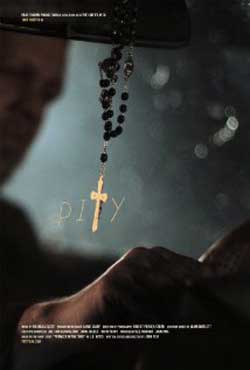 This is a portrait of a man at the bottom, struggling to find an answer, when the wrong things happened at the wrong time. This is a story of loss.

PITY focuses on one character, credited as Anonymous (Jake Martin). We enter the story at a dark moment in the character’s life, as he is seated outside the home of an ex-lover and contemplating his next move. The audience is not left with any doubt as to what he plans to do, although we do not know if he will go forward with his devious plans.

The story was written by a musician named J.R. Hayes, vocalist for the grindcore band PIG DESTROYER. In fact, the story was first published in the liner notes of the band’s album PROWLER IN THE YARD (2001). Some dark stuff here, folks. Not gonna beat around the bush on that fact.

As far as short stories go, this is as close to perfect as I could have hoped to see. We are dropped innocent and unknowing into the middle of the character’s breakdown. We are left to extrapolate the events before this moment and ponder what events will follow. Mr. Martin is compelling as the tortured man at his lowest point. I was horrified by him, yet also felt a level of sympathy.

PITY is the sophmore effort from Head Trauma, preceded by a feature film called DEAD WEIGHT. Both films have been honored and nominated for several awards at film festivals, including Famous Monsters Film festival, Diabolique International Film Festival, and Pollygrind Film Festival, among others.

Look up the IMDB on this film and you’ll find some fascinating trivia. Just from a technical stand point, there is some really neat stuff going on. The notes concerning composer Nicholas Elert’s score are worth the price of admission alone. After reading that bit of trivia, I went back and watched the film again.

So using my special “short scale” of one to five, five being awesome, I’m giving this film five cigarettes.