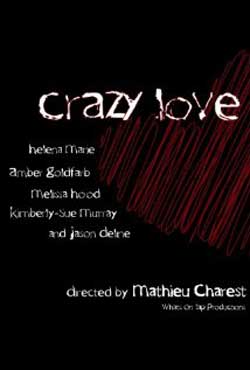 A short film about a woman who is mentally and physically abused by her boyfriend, who one day snaps and takes her revenge.

More short films! Today we have another Canadian short, funded by Indiegogo. I do so love crowd-funded film projects.

CRAZY LOVE was written by Helena Marie and Karl van Allen, directed by Mathieu Charest, and a lovely jazz score by Benoit Charest.

The film opens on a group of friends having a poker night. Sam (Helena Marie) is hosting her gal pals Claire (Amber Goldfarb), Melissa (Kimberly-Sue Murray), and Julie (Melissa Hood) for an evening of bonding and wine drinking…like you do.

Julie notices that Sam is limping and asks her about it. Sam gives a story about blisters from new shoes, but Julie knows better. After the other guests leave, Sam tells the Julie the real story about her injury.

Seems her husband/boyfriend (they don’t really say) Alan (Jason Devine) isn’t exactly Prince Charming. In fact, he’s a bit of a…well, an abusive douche. Sam has taken matters into her own hands previous to the gathering. However, things don’t go quite as planned.

This isn’t my usual taste in subject matter, but it’s a good story and is told succinctly and well. I have developed a lot of love for Canadian filmmakers over the years. They seem to have a different take on many different genres of film.

So using my special “short scale” of one to five, five being awesome, I’m giving this film 3 teacups.