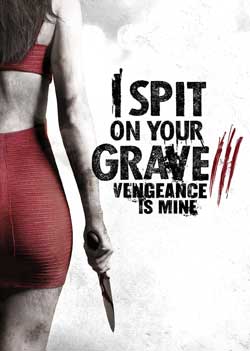 Jennifer Hills is still tormented by the brutal sexual assault she endured years ago. She’s changed identities and cities, reluctantly joining a support group where she begins to piece together a new life. But when her new friend’s murderer goes free and the tales of serial rapists haunt her, Jennifer will hunt down the men responsible and do what the system won’t – make them pay for their crimes in the most horrific ways imaginable. Only this time, no jury may be able to save her.

I Spit on Your Grave 3: Vengeance is Mine picks up a little while after the events of part 1, with Jennifer now seeing a therapist after being viciously attacked and raped. Unfortunately, her visits don’t seem to be doing her any good – she still feels threatened and on edge everywhere she goes, whether while at work or walking home. Everything seems to remind her of her attack, and we get flashbacks of the first movie to remind us what she’s been through. Eventually she starts going to a support group, where she meets Marla (Jennifer Landon, best known for her roles on the soap operas As the World Turns and The Young and the Restless), her first friend in a long time. When Marla is attacked, and Jennifer is reminded, yet again, that when it comes to violence against women, there seems to be very little help from the authorities, she starts to contemplate taking things into her own hands – and what would a rape revenge movie be without this critical thought process?

The somewhat refreshing thing about I Spit on Your Grave 3 is that, while it is by all means a rape revenge film, we are not subjected to gratuitous rape scenes for an hour and a half. We do get the flashbacks from part one, but they are fairly brief and mostly there to show us what is going through Jennifer’s mind. Of course, this doesn’t mean that the subject matter is light, but the despicable actions are mostly told rather than shown. Part 3, then, has more in common with a movie like Todd Morris’ A Gun for Jennifer, than, say, Meir Zarchi’s original I Spit on Your Grave. And much like Morris’ film, this one utilizes its characters to speak about feminist issues, working various viewpoints into the dialogue so as not to come off too preachy while at the same time still saying something important.

I Spit on Your Grave 3 is somewhat uneven, and a big part of that could be related to the relative inexperience of the creators – director R.D. Braunstein has only a couple of movie to his credit, and this is writer Daniel Gilboy’s first writing credit (although he has co-produced a handful of films). The first third of the film, aside from the flashbacks, is pretty much there to set up the story, whereas once we hit about mid-point the blood starts to flow. But every time we start hitting a stride, and the movie starts to flow smoothly, we cut back to Jennifer sitting in her therapist’s office. While these are important to the overall story, they often pull the viewer back out of the action the way they are interspersed through the film. Not a complete downfall, by any means, but a small distraction for sure.

Don’t let my description fool you – yes, there is a lot of build up, and there are some dialogue heavy scenes that establish our characters, but eventually the revenge part of this movie does kick in. And when it does, fear not, genitals will be mutilated. There are actually a couple of surprisingly brutal scenes once Jennifer decides to let loose and go for it. And there are a couple of decent twists in the story as we reach the end that might just surprise the audience, even if one of them does leave us scratching our heads a bit at the end. 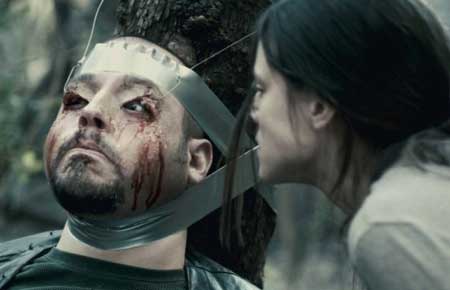 I went into I Spit on Your Grave 3: Vengeance is Mine a little bit leery, but I have to say, I was pleasantly surprised. While there are no absolute stand-out performances, everyone plays their respective roles quite capably. The effects work is impressive, especially in the first kill. The storyline never loses its direction, even though it does take a couple side roads here and there, and in the end tells a pretty good tale in the rape revenge model without getting overly preachy or overly gratuitous in its depiction of the violent act (of course, it’s always okay for the revenge to get gratuitous). If you like this subgenre of horror/exploitation, go into part 3 with an open mind and I think you’ll be pleasantly surprised.