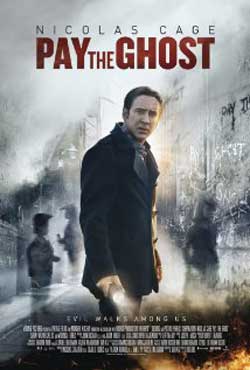 A professor frantically searches for his son who was abducted during a Halloween parade. (source: IMDB)

Direct to DVD movies with (former) big name actors attached are perpetually impossible to illicit any kind of excitement from anybody who understands the usual outcome of these B-grade (or lower) movies. When I was assigned Pay The Ghost, the feature adaptation of a short story by British author Tim Lebbon, I was skeptical about any form of entertainment value the moment I learnt Nicholas Cage was involved. Don’t get me wrong, I enjoyed Mr. Cage in his heyday; Con Air was a real blast, but he is increasingly involving himself in ever increasingly dodgy films, and though I know we all need to eat, crap, sleep and pay the bills, I like to think Mr. Cage is doing them as some kind of social experiment rather than a need to earn money…

Anyway, the story in a nutshell: Mike (Nicholas Cage) is a professor working hard and late to gain tenure at the cost of spending quality time with his wife Kristen (Sarah Wayne Callies of The Walking Dead fame) and son, Charlie. Charlie sees “something” at his window one night, and though Kristen pays no mind to it, or the creepy drawings Charlie draws of said “something”, it all comes to a head when Professor Cage– Mike loses Charlie amidst a Halloween parade just after Charlie asks his father “have you paid the ghost?”. As you will obviously know, this is any parent’s worst nightmare (with the exception of Susan Eubanks) and though Professor Cage– Mike searches frantically for Charlie, neither he, nor the police, are able to find him.

Jump forward to almost a year later (3 odd days before Halloween), and we learn that Mike and Kristen’s marriage is in ruins, with Kristen blaming Mike for failing to look after Charlie. Mike still obsesses over Charlie’s disappearance, constantly posting up “missing” flyers and nagging the police for new leads and updates. Mike constantly sees and hears his son, but it’s all in his mind, or is it…. With the police treating it as a cold case, Mike stumbles upon a link between Halloween and disappearances of other children spanning many, many years, Mike learns that something supernatural might be at the root at it all, and his son’s last words of paying the ghost might have some bearing after all…

Though Pay The Ghost had a cool, but rather commonplace concept and great actors at its disposal, neither were utilised to their full potentials, leaving us with an unmemorable tale filled with digital vultures that were never really explained and a rather placid Cage, an actor known to twerk things up a few notches. Direction was equally placid, with the barest of attempts made to evoke any real sense of thrill, fear or emotion. The whole affair felt like a watered down endeavor, feeling more like a midday movie than anything special or truly entertaining. Consider it a drama with supernatural elements rather than anything resembling a horror or thriller.

Would I watch this again? No. The film is watered down to a mediocre semblance of a thriller with a severe lack of atmosphere. It had the components to be something much more, but be it due to a lack of funding, direction, actor’s initiative or even a compelling screenplay, Pay The Ghost is not getting a second run from me. 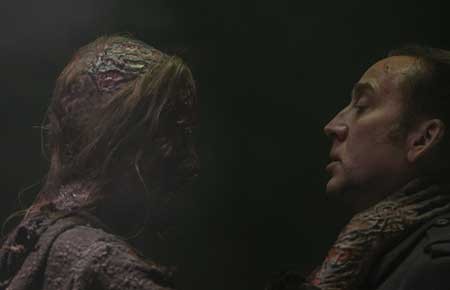 Would I recommend this film? Though it isn’t a terrible film, Pay The Ghost is simply an unforgettable attempt amongst the slew of far more better films of its ilk.