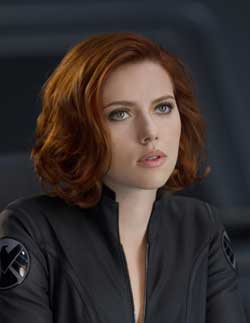 We talk to actress Scarlett Johansson– ‘Black Widow’ in the movie –Marvel’s Avengers: Age Of Ultron

How would you describe The Avengers at the beginning of Marvel’s Avengers: Age Of Ultron? And how has the world changed since the first movie?

Scarlett Johansson: It really is business as usual at the beginning of the film, but the world is aware of the universe in a way that they weren’t in The Avengers. The common man knows the vocabulary of aliens and space travel. Before the battle in New York, The Avengers had a stealthy approach and S.H.I.E.L.D. certainly had that as well – but now we’re being judged in a different way. Everybody is watching us, so it’s a different playing field.

What personal challenges do The Avengers face in the movie?

Scarlett Johansson: Every one of The Avengers has come to the table with a lot of baggage. None of us chose this job; the job chose us – and their reluctance to wear the superhero hat makes for very interesting backstories. We all have our histories, which we get to explore a little bit, and I think the audience is going to absolutely love it. It makes the audience that more invested in our interpersonal relationships and also the future of these characters, which is pretty cool.

How would you describe the romantic relationship that develops between Black Widow and Bruce Banner in the movie?

Scarlett Johansson: These characters have what I always thought was an unlikely love story that grows between them – but it’s actually rooted in a very likely love story because they have a lot in common. It’s a very complicated relationship. It’s an impossible love that seems unlikely but isn’t. 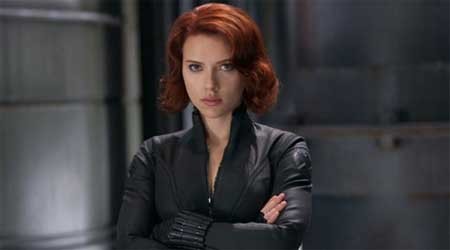 How does Black Widow tame The Hulk?

SCARLETT JOHANSSON: How does Natasha tame the beast? That’s a very good question. It’s interesting that she does it with a human touch. I would imagine your every instinct is telling you not to touch The Hulk. He’s not the person you grab and give a bear hug to. And yet, somehow, he’s a raging person that needs a tender bear hug. He needs someone to remind him that he’s grounded and he has someone with him. He needs someone to be present to tell him to come back to himself. She develops a therapeutic thing with the Hulk, and I think that probably comes from her own maternal instinct.

How does it feel to play a female superhero in a male dominated world, Scarlett?

SCARLETT JOHANSSON: I just go through the script and look at my parts – and those are the only parts I read. What’s great about playing this character is that she is based on something deep and something I could hold onto. She’s very real. She’s experienced a lot of trauma and she’s never really been able to make active choices for herself – but now she is and she’s ready for it.

You were pregnant when you shot the movie. How did you prepare for the physical role and the challenging motorcycle scenes?

SCARLETT JOHANSSON: I don’t think you’re allowed to ride a motorcycle when you’re pregnant. I embarrassingly rode some sort of mechanical bull-type of motorcycle, which goes nowhere and doesn’t look cool at all! But we had some very professional and amazing motocross work being done that makes Black Widow look like a total badass.

How much do you enjoy the physical aspect of the role?

SCARLETT JOHANSSON: I’m very fortunate that there’s a team around me that is super-supportive in helping all of Widow’s fight moves and badass motorcycle riding. It takes a lot of choreography and team spirit. Every film is exciting because I get new tools and cool new things to do. Luckily, [director] Joss [Whedon] writes me some badass moves that make me look epic. It’s awesome. 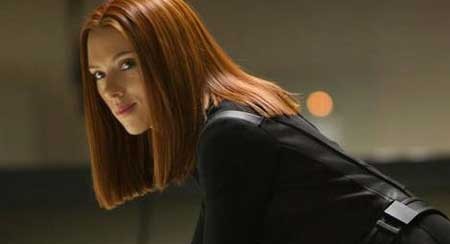 How would you sum up Black Widow’s journey in the movie?

SCARLETT JOHANSSON: At the beginning of Avengers 2, there’s some sense of The Avengers being a well-oiled machine. Finally, the introductions are over and we’re at work, we’re digging our heels in. At the end of Avengers 2, I think Widow has let her guard down and she is hopeful for something. I think she had this moment of false hope where she felt like she put in the work and there should be some kind of personal payoff – and she was ready to accept it. Then she realizes that her calling is a greater one and that’s not necessarily something that she’s thrilled about, but that’s what is most heroic about her. She accepts the call of duty, even at her own personal loss. I think it’s an interesting place to leave her, because there are many different directions to go. Is she going to be able to withstand this huge weight that’s bearing down on her or is she going to crack under it and crumble? I guess we’ll have to wait and see, right? 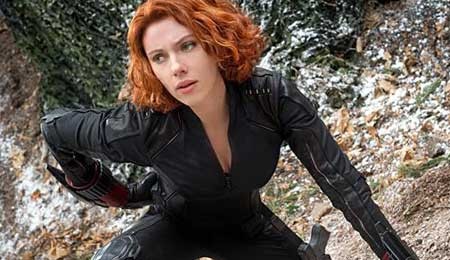 Would you like to see a solo Black Widow movie to tie up these loose ends?

A Black Widow movie will be cool. Sure. I’m always excited to get that cat suit on!