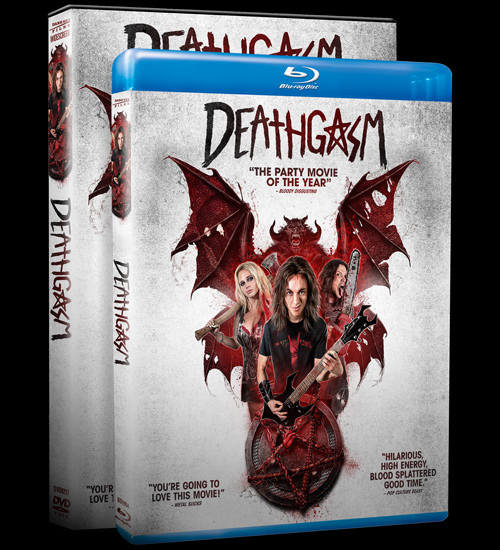 Two teenage boys unwittingly summon an ancient evil entity known as The Blind One by delving into black magic while trying to escape their mundane lives.

Deathgasm is the feature film debut of New Zealander Jason Lei Howden, and what a debut it is. Initially one of several ideas Howden was toying with during the Kiwi contest, Make My Horror Movie (from producer extraordinaire Ant Timpson), and filmed in only 20 days, Deathgasm is equal parts coming of age high school comedy, splatter horror and This is Spinal Tap.

Milo Cawthorne plays disenfranchised teenager Brodie, moving in with his evangelical Uncle and Auntie after his mum is incarcerated. Brodie’s denim jacket, skinny jeans and love of all things metal put him at immediate odds with his new carers. Almost violently so in the case of his cousin, who takes great pleasure in terrorizing Milo. Milo’s only friends at High School are two Dungeons and Dragons fans, with whom he hides away in the common room fantasizing about being a metal god. And then he meets Zakk (James Blake).

Kicked out of high school, Zakk spends his days frequenting the town’s only record shop and causing havoc. To Milo, he becomes a kindred spirit. When the duo form a band, they unleash the apocalypse upon their town after unwittingly reading the words to a black mass that they stole off a reclusive rocker called Rikki Daggers. It’s a heartwarming tale that anyone can relate to when they look back on their years as a tearaway in high school. We’ve all been there.

And so Zakk and Milo must join forces, along with their D&D band mates and love interest Medina (Kimberley Crossman), to fight back the legions of evil that sweep through their town. Meanwhile, a mysterious organization waits in the shadows hoping to trip the gang up.

The joy of Deathgasm is how funny it manages to be whilst throwing in some great moments of horror. It’s perhaps a cliché to bring up Dead Alive (aka Braindead) considering Peter Jackson’s own New Zealand heritage, but it’s certainly hard not to note the comparisons as Milo and Zakk attack a bunch of demons armed only with sex-aids. It’s the kind of gay abandonment that only comes from someone who is having a hell of a lot of fun with what they’re doing and wants you to join in too. If you didn’t think a beheading could be funny, then I point you in the direction of Deathgasm. Genital mutilation with a pithy one liner? Deathgasm. Practical effects that hark back to days before CGI took over? Deathgasm. Discovering that we’re all just food for machines that have us plugged into a virtual reality which no chance of escape? That’s The Matrix, but you should watch Deathgasm instead.

Another strength of the film is Howden’s love of his characters. I’m sure there are some metal heads that read the film’s description and immediately rolled their eyes at another cinematic portrayal of rockers, filled with outdated references and heroes constantly calling each other ‘dude.’ Knee deep in the metal culture himself, Howden knows exactly what he’s talking about. And whilst Zakk and Milo might make fools of themselves occasionally, it’s all just a gentle ribbing that will be doubly appreciated by anyone who was an outsider at school and is privy to fanzines and corpse paint. Even the D&D angle harks back to Howden’s misspent youth. It’s these moments that shouldn’t be overlooked. Such as Milo trying to convince Medina that not all metal music is screaming into a microphone before admitting, good naturedly, after listing numerous sub-genres that she might be right. 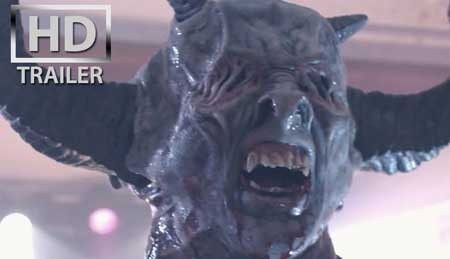 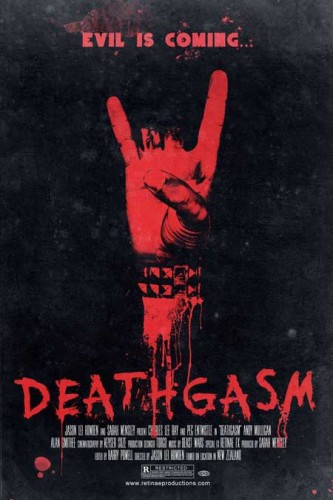 Bloody, bold and brilliant, Deathgasm is worthy of anyone’s time. Great laughs, brilliant effects, utterly offensive and with a killer soundtrack (which will hopefully see a physical release in the future). I made a bold statement on this very site that New Zealand horror is pretty damn special. Deathgasm just goes to prove my hypothesis. Shock your parents, scare your granny and get involved with this cracking indie horror. You will not be disappointed.
Special Features:Commentary with Writer-Director Jason Lei Howden, Featurettes, Music Video: Bulletbelt Deathgasm

Deathgasm is now available on bluray per Dark Sky Films 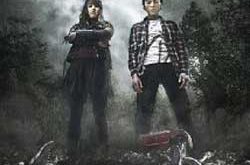