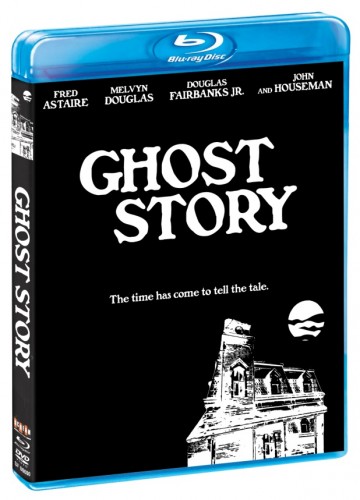 The time has come to tell the tale. Scream Factory proudly presents the Blu-ray debut of Ghost Story on November 24, 2015. Based on the bestselling novel of the same name by Peter Straub, Ghost Story features four of Hollywood’s most distinguished statesmen – Fred Astaire, Melvyn Douglas, Douglas Fairbanks, Jr., and John Houseman – as they join forces against a paranormal nemesis.

In a peaceful New England town, the four lifelong friends who make up the Chowder Society come together each week to regale each other with tales of terror. But when one of the elderly gentlemen experiences a family tragedy, it becomes apparent that a buried secret from their youth has arisen to remind them of the sins of their past. Soon, they will learn they have never been forgiven… and a supernatural vengeance awaits them all. Craig Wasson, Patricia Neal, and Alice Krige also star in this chilling and atmospheric telling of one of horror’s greatest stories.