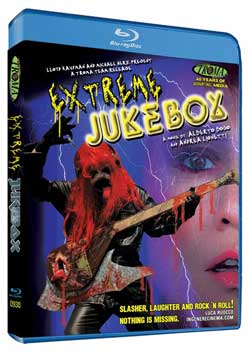 Welcome to Nova Springs, a rock and roll metropolis chock-full of rising stars. Here you’ll meet Jessie Cake, a charismatic glam metal frontman and his groupie girlfriend, Chloe. After unearthing a mysterious LP in the abandoned estate of legendary 80s superstar David Crystal, these young lovers unleash a bloodthirsty spirit…the infamous “Killer of the Woods.” Even worse is the flesh-and-blood maniac Naughty Rocky Boy, the skulking back-alley killer whose weapon of choice is a musical instrument!

Directed and written by Alberto Bogo, this Italian rock horror comedy film is quite frankly “off the beaten path”. In fact, I found the start of the film hard to follow (not to mention “what” direction this film’s actual intention was).

“Welcome to Nova Springs”, we are told…..is an area that breeds up-and-coming rock and roll stars. These rockers are often darkly intense, self obsessed, and gloomy-minded living their lives under a reality that caters to their indulgences. David Crystal (legendary influential rocker of his time) has long been missing from the rock and roll radar leaving behind a legacy that includes a mysterious LP that was never released. Rock star Jessie Cake (Alessio Cherubini) decides to include one of Crystal’s unreleased tracks on his new release as a tribute to his idol when he stumbles upon it at Crystal’s last whereabouts. The track awakens a zombie backwoords serial killer who for 7 days emerges from the ground to execute anyone who gets in his path (why?…..my  guess is as good as yours). 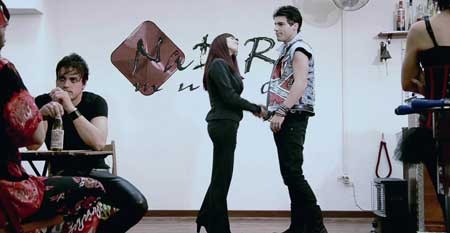 In review, we have a series of circumstances where rock stars are being murdered or dying off in what seems to be “mostly” a result of a mass serial killing spree. At the helm of this is a backwoods mask-wearing good ol boy deemed “Naughty Rocky boy” (also way overdue for a serious dental plan). Rock stars die, while others vanish, though parties continue to congregate in tribute.

That in itself is the gist of this film for better or worse. 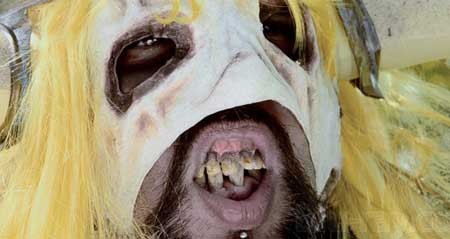 The odd portions of this movie seemed to be especially fragmented due to the film’s off tempo storyline (I struggled to stay focused to endure its duration). Take a touch of Italian horror genre influence, throw in some Troma wackiness and top it off with a project that needed more thought put into it…and well there you have it….Extreme Jukebox

Frights?, not quite, crazy masks, costumes, and characters do more to steer away from serious horror than to celebrate it, though gore fans do get some crazy kills scenes to fill the gaps.

The end product here is more suitable for late night midnight movie runs than living room watching as it attempts to satire its genre. Often I got the sense that the filmmakers here were just piecing together circumstances to make up the requirements of a feature film. A jumbled mess is about what we are left with..though it does entertain here and their in its attempt. 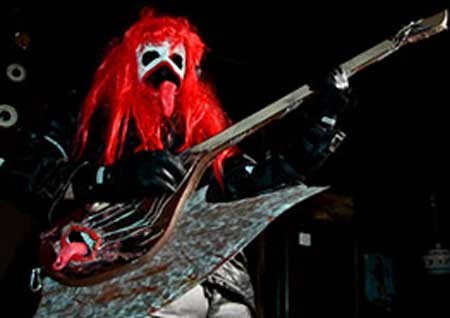 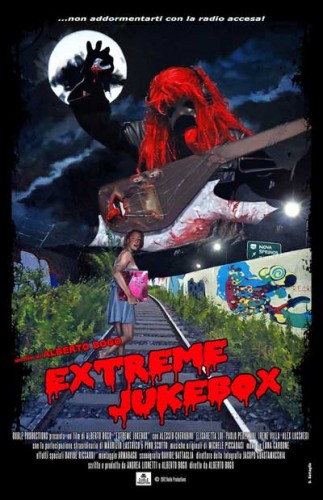 My recommendation here is to add this to your “offbeat” films bluray section for times when you and friends need something  “mindless” to a laugh about and scratch your heads at the same time. This is not one of Troma’s better films, but it does offer a bit of strange and weird to those who seek out those kind of movie creations. I’m cutting this review short simply because I wasn’t sure what else to talk about.

If any of this review inspires you then feel free to hop on over to Troma for the bluray release of Extreme Jukebox.