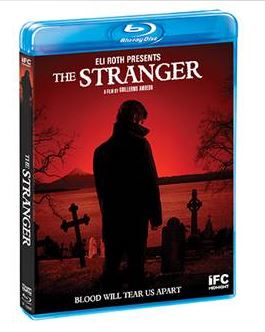 A mysterious man arrives in a small Canadian town seeking his wife, though his presence plunges the community into a bloodbath.

I’ve said it before and I’ll say it again in respect to the vampire genre, I’m always amazed at how many unique approaches the horror genre has been able to present to the world thru different eyes of different film makers. Now one might easily walk into this film without any preconception of vampirism (as I did), not exactly knowing where the story direction is headed. The film has a very bleak dark look to it much in the same way as that other vampire films, such as “Near Dark” and “Let Me In”. The title itself is doesn’t reveal too much in the way of obvious reveal basically leaving an open door for viewers to guess where things may be headed. Even The cover slogan of “blood will tear us apart” is vague enough to suggest one of many directions. 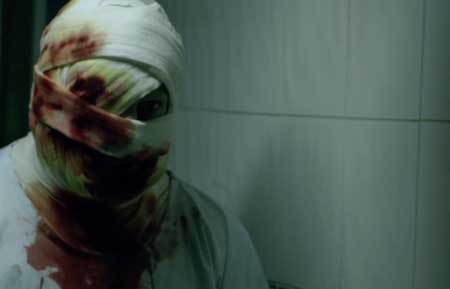 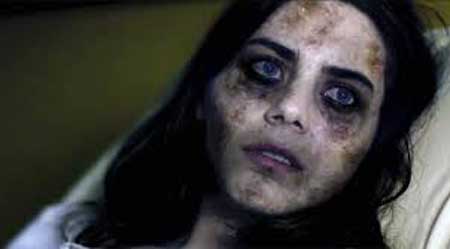 I say this because “The Stranger” does in fact leave us guessing for quite a while as to “what” the intent of its story is by slowly working its characters into its delivery. A mysterious man, Martin (Cristobal Tapia Montt) arrives into a small Canadian town with the goal of locating his wife Ana (Lorenza Izzo). Upon discovering that she had died and was buried in 1997, he embarks heavily into seeking answers into her past and into the people she was staying with. The realization (though leaving him distraught) is quickly interrupted when local A-hole Caleb (Lorenza Izzo) and his 2 buddies decide to assault Martin in the park (for no reason) and murder him in cold blood. This is further escalated by Caleb’s corrupt police officer father who seemingly seems to support his son’s actions rather than enforcing the law. This tag team of “bad seed” locals lays a gritty grounding to Martin’s journey adding much more trouble to the situation than he bargained for. 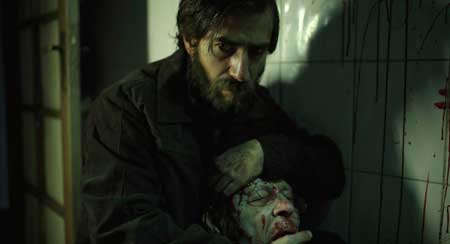 Peter (Nicolás Durán) is the pure soul here that seemingly wants to help, understand, and do the right thing. He begins to discover more about the stranger than he asked for bringing the realization of Martin and Anna full circle into his past. 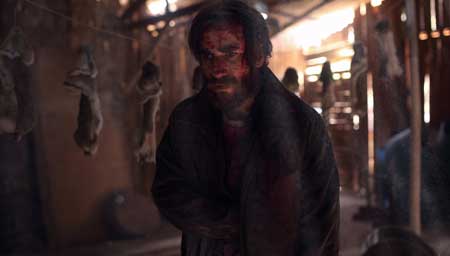 The Stranger instantly succeeds where others have tried and failed. The film’s bleakness and cold foundation provides the perfect mood-base needed to pull viewers into the movie’s character base. The protagonist/antagonist relationship is established in the first 5 minutes creating a layer of assumed directions to play out. It is by using this slow-grind approach that we discover details to the story not yet disclosed. Effectively this is done using both past and present always suggesting some sort of vampiric interplay without the obvious giveaways. Martin does indeed provide the stranger aspect to his story who seemingly invades the town by pure interaction alone. While we get a certain amount of corruption in town handed to us, it really is not the foundation to the movie’s theme, rather we have a broken family that has had to endure some pretty harsh realities haunting them from the past.

Martin is presented as a cursed individual offering abilities that come with a price. His bleak past seems more destructive than inspiring leaving him with a death-wish that seems to evade. The viewers if often left guessing as to why Martin just doesn’t man-up rather than letting thing suggest worse. I suppose he is plagued with a level of self pit but otherwise should know better as to what alternative await if he doesn’t act.

Caleb (Lorenza Izzo) brings to mind a certain amount of Lost Boys Sutherland influence to his role while effectively embracing his bad boy persona right from act 1. Things begin to get nasty as old vamps and new vamps go head to head.

Guillermo Amoedo invokes a mood thru his recommendable horror debut that provides a series of interest points to attach oneself to. Viewers are almost forced into engaging for the pure notion of discovery. As while we know the horror element here is bound to rear its head, we are first engaged thru mystery and thrills. A solid thriller, “The Stranger” has got swagger and drama that in this case makes it loud and clear that being cursed with vampirism is not all that glamorous.

The Stranger is now available on bluray per Shout Factory